The Old Fox and Hounds stands on a corner site at the very southern end of London Road, just across the street from West Croydon station. With an exterior little changed from Victorian days, it’s yet another piece of history still visible in today’s Croydon.

The pub has been here since the mid-1800s at least. One source states that it arrived in West Croydon around 1800, having moved from a previous location on the High Street, though I’m reluctant to claim this as a proven fact since I haven’t found independent evidence of it.[1].

What I can be fairly confident in stating is that land at the London Road site was purchased in 1835 by James and Thomas Turner, who leased it five years later to Edmund and William Calvert of the Calvert brewing family. The 1841 census lists a John Smith as “inn keeper” on the west side of the road (though no addresses are given at this early date). The 1844 tithe map shows a building in the current location, listed as “Croydon Station Inn”, assigned to John Tippett. The 1851 census lists a John Tebbutt as “victualler”, and a street directory from the same year has John Tebbutt as “licensed victualler” at the “Fox & Hounds”. So despite the vagaries of 19th century spelling, the Fox & Hounds has certainly existed under that name since at least 1851.[2]

In 1877 the pub was sold at auction to the City of London Brewery Co, a successor company to Calvert’s, the former tenants. By 1951 it had changed hands again and was now owned by Charringtons. Charringtons merged with Bass in 1967 to form Bass Charrington Ltd, and finally Greene King bought the site from Bass on 1 January 1994.[3] The Greene King purchase may have been the point at which the name changed from the Fox & Hounds to the Old Fox & Hounds; a photo taken 7 months earlier shows that as of June 1993 the signs on the frontage still read “Fox and Hounds”.[4] Greene King still own the pub today, though it's leased to Dempsey Taverns, who also run a number of other pubs and bars in the area.[5] 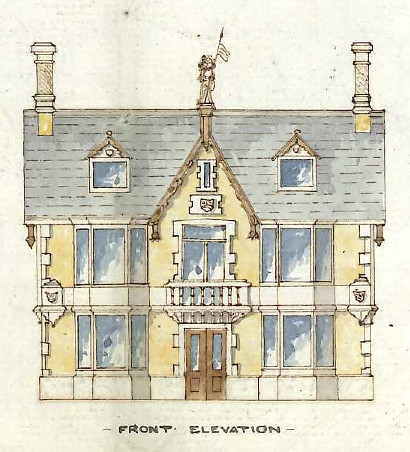 Drawing of the Fox & Hounds, taken from an 1840 deed. Reproduced by kind permission of Greene King.

The deed recording the 1840 lease to the Calverts includes a colour drawing of the pub (see illustration). It’s clear from this that many features of the frontage have been retained to the present day, but the drawing also omits the right-hand side of the modern building, suggesting that this side of the pub is a later addition. How much later, I’m not sure, though a newspaper photo from 1894 shows the extension in place.[6]

Like many pubs, the Fox & Hounds was once divided into two sides: a public bar and a saloon bar, with the saloon bar offering a more refined experience. The public bar was on the left-hand side, in the original building, while the saloon bar was to the right, in the later-added extension.[7] Today, there’s free passage between left and right with no need to go outside and back in again, though in common with many other previously-divided pubs, the two sides still retain a slightly different ambience.

The Fox & Hounds in the early 20th century. “J. L. Denton” on the frontage refers to the licensed victualler, Judith Denton, who according to Ward’s street directories had the pub from c.1900 to c.1925. Image provided by and used with the permission of Martin Carroll, who owns the original negative.

The reason the pub was named the Fox & Hounds was most likely some original connection with foxhunting, possibly via the landlord or owner’s personal interest. As is often the case with interestingly-named pubs, the name has continued to resonate in various features of the pub over the years. According to one (non-contemporary) source, as of 1874 the landlord “provided hunting facilities for the guests”, and kept stables at the rear.[8] The stables were still there in 1892, with a newspaper advertisement from that year boasting that “The Livery and Bait Stables have now every attention.”[9]

Echoes of this remain even in the current century. A newspaper clipping found in the Local Studies Library (undated and unattributed, but probably from between 1998 and 2009[10]) reports on the pub’s reopening after a major refurbishment that included the creation of a “stable-themed garden”. Today, a sign pointing the way “to the stables” is still visible on a ceiling beam inside the pub.

After learning about the long history of the pub — two centuries in West Croydon — I was also interested to find out more about the place today. Roy, who’s been manager of the Old Fox & Hounds since taking over earlier this year, was kind enough to spare some of his time for a chat over a pint.

Given the proximity of the pub to West Croydon station, I was keen to ask about what type of customers can generally be found in the pub — regulars or passing trade? The answer, it turns out, is both. While there are plenty of regulars who live locally, the pub is also used by shoppers, commuters, and people waiting for taxis from the minicab firm opposite. There’s generally a surge of business from after-work o’clock until around 9pm on weeknights, as people return from their jobs elsewhere in London and have a drink or two before heading home and leaving the place to the die-hard regulars.

According to Roy, the strength of the Old Fox & Hounds is in the people who drink there. He’s not trying to compete with the 15 handpumps at the Ship of Fools a few doors down (the only real ale on sale here is Greene King IPA), but instead finds that the camaraderie between the customers is what keeps people coming back. People bond with each other here; they make new friends and find other people they can be open and comfortable with.

Roy is careful to keep order in the pub; over three decades of experience in the licensed trade has taught him how to recognise and head off trouble before it starts. He doesn’t find a need to employ door staff, and considers the pub to be aimed at a different market than the late-night bars of the town centre — its appeal is mainly to those aged 25 and up, and there’s no entry after 10:30pm.[11]

At the bar, I talked with a couple of brothers who’ve been regulars at the pub for over 50 years; they recalled that it was a firmly Irish pub when they started drinking there. The Old Fox & Hounds still has a strong Irish clientele (and sells a fair amount of Guinness), but Roy told me that these days the diversity of the area is reflected in his customers, with people from all backgrounds drinking and mingling together.

As a real ale drinker, I wouldn’t normally choose a Greene King pub over any other. Although it’s generally a safe bet that a Greene King pub will have at least one handpump offering their flagship ale (Greene King IPA), guest ales are less common — and to be honest, I find their IPA a bit bland.[12] But contrary to what some people seem to think, there’s more to a pub than the drinking. In a good pub, you feel welcome, as though you belong; you feel special, as though you matter. One of the essential ingredients of a good pub is a good publican — and as I found out during my chat with Roy, that’s something the Old Fox & Hounds certainly doesn’t lack. Here’s to another 200 years!

Thanks to: all at the Croydon Local Studies Library; the press office and property team at Greene King; Dempsey Taverns; Brian Mortimer; Ewan Munro of Pubology; Martin Carroll; Roy, Peter, and Paddy at the Old Fox & Hounds; and my beta-readers Antonia, bob, Helen, Kat, Shuri, and Steve. 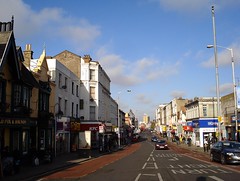 « The Past and Present of Croydon's London Road: An Introduction
Think of Croydon, and what comes to mind? Trams, tall office blocks, the big chain shops of North End, the Old Town charm of Surrey Street market, the historical almshouses and Minster? Beyond all this, there's an area of Croydon that came prominently and shockingly to attention just over a year ago: London Road. 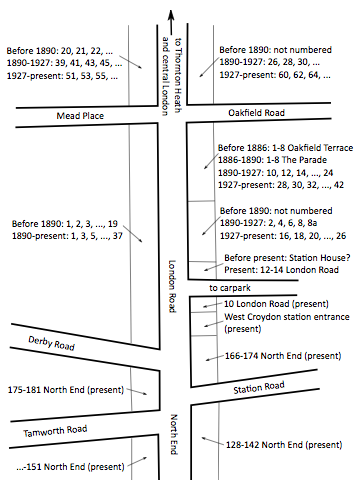 2–8 London Road, part 1: Street numbers and the lack thereof »
Last week I wrote about 1 London Road, so given the rules of this series, today I should be writing about 2 London Road. But I can't — because like numbers 4, 6, and 8, it doesn't exist. Why not?