The weary traveller who exits West Croydon Station in search of sustenance on London Road need look no further than the Ship of Fools. Almost directly opposite the station, this Wetherspoon’s pub is large and welcoming, with friendly staff, interesting real ales, and well-priced food.

Sadly, the pub is due to close at some point during 2013, as Wetherspoon’s have sold the lease of the premises to Sainsbury’s. Those with a keen eye on Croydon’s local media will already know that this marks a return to 9–11 London Road for Sainsbury’s, which was probably the most prominent — and certainly the most long-standing — previous occupant of the premises.

Sainsbury’s advertising tokens featuring the West Croydon branch. These tokens were given away between 1882 and 1913 to promote new branches, and were used as toy money or gaming tokens.[1]. Cropped from a photo © Tony Skrzypczyk, used by permission.

London Road in the early 1800s

As noted in a previous article, numbers 7–11 London Road were constructed later than their neighbours, filling in a gap between number 5 to the south and number 13 to the north[2]. This piecemeal construction is fairly typical of London Road, but it occurs to me that I haven’t yet explained the reason why; so here is a brief diversion to elucidate.

Until around 1824, the area between the top end of North End and the present location of Chatfield Road was occupied by a piece of common land known as Parson’s Mead[3]. The Parson’s Mead Enclosure Act was passed in 1823, and most of the land then came into the possession of the Caldcleugh family, who already owned land further north at Broad Green[4]. However, it remained undeveloped for some years afterwards.

In May 1835, the Caldcleughs offered for auction the land bounded by present-day Sumner Road, Handcroft Road, Parson’s Mead, and London Road. The six acres at the north end of this, consisting of Broad Green House and its grounds, were purchased by Jonathan Barrett of Streatham. The rest of it, running along the west side of London Road, was divided up into 62 separate lots. All known purchasers of these smaller pieces of land were Croydon residents, and none bought more than a few lots, so the land ended up being owned by multiple people, each with a small piece. Hence, development proceeded in a fairly patchwork fashion, as is obvious from the varying architectural styles still visible today[5].

The west side of London Road in the late 19th century; the taller building in the centre is 7–11 London Road, and numbers 9 and 11 are the ones with canopies at the front. Modern reproduction (Pamlin Prints) of a photo by Francis Frith. No date is given, but Frith died in 1898 so it must be before then. In addition, the canopies on numbers 9 and 11 are at different heights, so it's almost certainly before the mid-1890s, when John James Sainsbury expanded from number 11 into number 9.[5a] 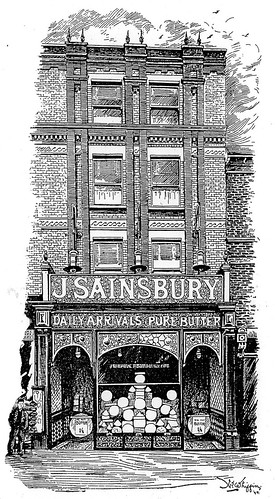 J Sainsbury, 11 London Road. Drawing taken from “Croydon Old & New Illustrated”, a supplement published in 1894 by the Croydon Advertiser. Note that this drawing seems to predate the expansion into number 9 next door.

Numbers 7–11 London Road were built between 1877 and 1880. In contrast to the current situation, with numbers 9 and 11 knocked into one, they were originally all separate premises. However, they were all owned by the same person — John Sainsbury, provision dealer[6]. After purchasing the properties in the early 1880s, Sainsbury leased numbers 7 and 9 to other businesses[7] and set about outfitting number 11 as a new style of grocery shop.

Although John Sainsbury had opened seven other shops before this one[8], the London Road branch was a turning point in the growth of his grocery empire. It was aimed firmly at the middle classes[9], and the focus was not only on elaborate decor but perhaps more importantly on cleanliness, which was not a particular strength of the retail food trade at the time[10].

The Story of Sainsbury’s (published by J Sainsbury Limited, April 1969) describes the shop thus: “The windows were framed by marble-faced pillars, wood, and stained glass spandrels; the fascia, was crowned with wrought iron and displayed the Sainsbury name in gilded glass. The floor was tiled, as were the walls and counter fronts, in the lush designs of the period and the counter tops were made of marble slabs. The office was built of polished teak, the customer's side of the counter furnished with bentwood chairs.” It opened in 1882[11], and in the mid-1890s was expanded into number 9 next door[12].

Sainsbury’s Croydon store was to be only the first of many other stores in the same style. In 1888, similar branches were opened in Balham, Brondesbury, and Lewisham, all modelled on the store at 11 London Road[13]. The West Croydon branch thus acted as a template for Sainsbury’s move towards catering for a wealthier class of customer.

This was not the only way in which the store was important in Sainsbury’s history. It should be remembered that when John Sainsbury began to build his empire, grocery shopping was very different from the way it is today. Instead of picking up prepackaged food from a shelf, shoppers would queue up in different shops — and even at different counters within the same shop — for their goods to be weighed out and individually wrapped. This somewhat inefficient way of buying goods remained standard in the UK until the middle of the 20th century[14].

In 1949, however, Alan Sainsbury and fellow director Fred Salisbury went to the USA to learn more about the deep-frozen food industry and instead became fascinated by the idea of self-service retail. Keen to try this idea for their own stores, they conducted an experiment — a sort of pilot study — with the branch at 9–11 London Road. As this branch occupied a double shopfront, its size made it the ideal place to try this, as half of it could be closed at a time, allowing trading to continue during conversion works[15].

Sainsbury’s first self-service store opened on London Road on Monday 26 June 1950[16]. An article published in the Croydon Advertiser later that week describes the new system as an “American-inspired ‘Help yourself’ scheme”, and provides a detailed explanation of the process of self-service shopping: “On entering the shop the housewife is given a wire basket or, if she intends to make a very large number of purchases, a two-tier wire trolley. She is then free to wander at will round the stainless steel and perspex stands which are closely packed with every type of grocery imaginable and clearly labelled. Every commodity has a price ticket and when the housewife has completed her tour she checks out at one of five exits, empties the wire basket and pays her bill.”[17]

A model of the Sainsbury’s shop at 9–11 London Road, part of the “West Croydon” tram layout built by John Clarke on the basis of photographs provided by Croydon Local Studies Library. This photograph taken by the author at the 2014 Croydon Model Railway Society exhibition in Warlingham.

Another chapter in Sainsbury’s history also began at this branch — decimalisation. Following an announcement by the Chancellor of the Exchequer on 1 March 1966, the UK was set to convert its currency from pounds, shillings, and pence to decimal pounds and pence on 15 February 1971[18]. In order to train its staff and acclimatise its customers, Sainsbury’s set up a “training shop” at 9–11 London Road. From 10 February to 27 November 1970, over 1,500 key staff from different branches were trained to use the forthcoming currency, selling goods with plastic coins to over 30,000 visitors including specially-invited groups such as Townswomen's Guilds and Women's Institutes[19].

At the end of this ten-month training session, however, Sainsbury’s departed 9–11 London Road after nearly 90 years at the address[20]. The building may then have spent a brief period as a Green Shield Stamps shop[21], but by 1973 it was an Argos catalogue store[22]. Cash Converters also spent some time at the premises, before moving to numbers 13–15 next door[23].

Argos, 9–11 London Road, in the 1980s. Cropped with permission from an original photo © Brian Gittings.

The Ship of Fools opened on 28 September 1999, joining the many other shop conversions in Wetherspoon’s estate. As with other such conversions, Wetherspoon’s chose a name with a local connection; in this case, the work of the same name by Alexander Barclay, a poet and clergyman who died in Croydon in 1552[24].

Here I declare a bias: I am very fond of Wetherspoon’s pubs. They're unpretentious, they do decent food at reasonable prices, they generally have excellent step-free accessibility, and they have a strong focus on real ales and ciders. Although the London Road branch hasn’t always had the best of reputations throughout its 13 years in West Croydon, under the careful guidance of current manager Liz Tuffey it’s become one of the better examples of the breed.

It’s worth noting that the impending closure of the pub is related neither to the August 2011 riots nor to Sainsbury’s previous ownership of the premises. The plan to offload the property from Wetherspoon’s estate was devised four years ago, partly on the basis of the expense of maintaining the building. It’s also not the case that Sainsbury’s have owned the building all along — they sold it after closing their previous store, and it’s currently owned by a landlord with many other properties around London. Wetherspoon’s originally took out a 25-year lease on the property, but have now transferred the remainder of this to Sainsbury’s[25].

Update, January 2014: When this article was originally written (February 2013), it still wasn't clear when the Ship of Fools would finally be closing — the only thing Liz and her staff had been told was that they’d be given 20 days’ notice[26]. Along with the many other people who used the pub, I knew I’d be very sad to see them go. It finally closed in June 2013, and half a year later I still keep finding myself wanting to go for a drink there.

Sign announcing the last day of the Ship Of Fools. Photo © bob walker, taken in May 2013, used under Creative Commons cc-by-sa.

Thanks to: Liz Tuffey at the Ship of Fools; the Marks & Spencer Company Archive; the Planning Technical Support Team at Croydon Council; Sean Creighton for helping me avoid a false trail; Gabriel Shepard at the Croydon Advertiser; Leigh Sparks; Marc Bannister; Ray Wheeler; John Clarke; Colin Withey; Tony Skrzypczyk; all at the Croydon Local Studies Library; and my beta-readers bob, Ewan, and Flash. 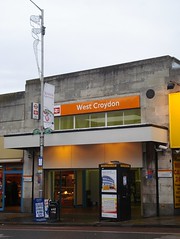 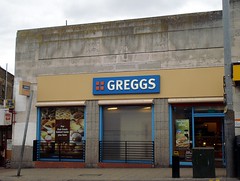 10 London Road: Greggs »
The breezeblock building of West Croydon Station's London Road entrance also houses a branch of Greggs, the UK-wide bakery and pasty-seller. The building was constructed in the early 1930s as part of the redevelopment of West Croydon Station, and one of the first businesses to move into the premises was a branch of the National Provincial Bank, a predecessor of today’s NatWest Bank.