As explained earlier in this series, numbers 2, 4, 6, and 8 London Road no longer exist — so instead of writing about 8 London Road, here I present the final instalment of my research into West Croydon Station, covering developments in the 2000s and looking at the role of the station within the area today. 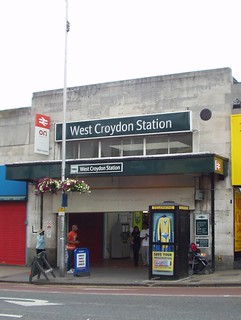 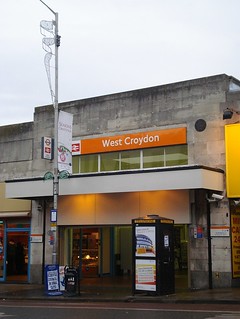 West Croydon Station in June 2007 (cropped from a photo © bob walker, used under cc-by-sa) and in December 2011, after being rebranded as London Overground (photo: author’s own).

To recap briefly, West Croydon Station opened in 1839 as Croydon’s first railway station. Services initially ran from London Bridge and terminated here, but an extension was opened to Epsom in 1847 and another to Wimbledon in 1855. The station was rebuilt in the early 1930s to create the more prominent London Road façade that still stands today. Along with the rest of Britain’s railways, it was nationalised in the 1940s and re-privatised in the mid-1990s. (Further details of these developments can be found in my two previous articles on the subject, linked above.)

While East Croydon is now usually considered a more important station than West Croydon, this has not always been the case. As noted above, West Croydon was the first to open, in 1839, with East Croydon following in 1841. Gray & Warren’s 1859 Directory of Croydon has a long paragraph on “The Railway Stations” of Croydon, devoting 13 lines to West Croydon station and only 5 to East Croydon (it does concede, however, that East Croydon was “one of the most important establishments on the Brighton and Dover Railways”).[1] The October 1932 issue of Southern Railway Magazine gives comparable figures for the annual “number of passengers booked” at both West Croydon (1,001,075) and East Croydon (1,304,377), though East Croydon does win on season tickets (19,740 vs. 5,607).[2]

Even today, according to the draft Croydon Opportunity Area Planning Framework published in July 2012, “more people arrive at West Croydon during the day to go shopping than at East Croydon”.[3] This perhaps isn’t too surprising, given the two stations’ relative proximities to the main shopping area of North End; from the main entrance of West Croydon Station to the front door of the nearest major store (Marks & Spencer) is just over 100 metres, whereas the distance from East Croydon Station to the closest part of North End is six times greater.

An old-style tram at the George Street tram stop in August 2007. Tramlink trams are now green, but they were originally red. Photo: author’s own.

Of Croydon’s major transport developments in the 2000s, the first one relevant to West Croydon Station was the creation of Tramlink in summer 2000.[4] Trams don’t run directly from the station itself — the tram stop is opposite the bus station on Station Road, around the corner from the main station entrance.[5] However, the connection is a very useful one for onward travel, both within the Croydon area and further afield to places like Wimbledon, Elmers End, and New Addington. 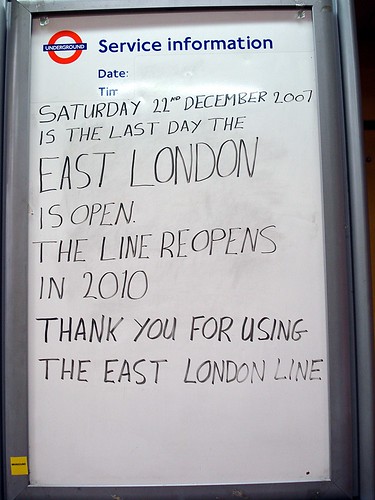 Whiteboard at Rotherhithe Station in December 2007, noting that the last day of East London Line operation will be Saturday 22 December and that the line will reopen in 2010. Photo: author’s own.

Another major development was the extension of the East London Line to West Croydon. Previously a Tube line running from Shoreditch Station in the north to New Cross Station and New Cross Gate Station in the south, the East London Line was transferred to London Overground[6] and redeveloped and extended during 2008-2010. Full service from Dalston Junction via New Cross Gate through to West Croydon began on 23 May 2010,[7] and this first phase of redevelopment was completed in February 2011, when the service began running beyond Dalston Junction to Highbury & Islington.[8]

Although London Overground trains terminate at West Croydon, they do so at a through platform, Platform 4. There are two plausible reasons for this, though I have no official confirmation of either. First, it’s more convenient for passengers who want to continue their journey southwards, as it gives them a same-platform interchange with trains down to Sutton and Epsom. Second, West Croydon only has one terminating platform, Platform 1, which is already used by the London Bridge service (and sometimes also by Victoria-bound trains).[9] Hence, after passengers have disembarked at Platform 4, London Overground trains continue a little way down the track and pause for several minutes just short of the Roman Way overpass (shown below), before coming back to the station to pick up northbound passengers.[10]

A London Overground train pauses at the end of its route, before returning to West Croydon station to pick up northbound passengers. View from the Roman Way overpass, December 2012. Photo: author’s own.

While planning this article, I received a request from a reader who asked me to explain “why the Overground always seems to take ages to get into West Croydon.” It’s a fair question! Passengers who frequently travel into the station will be well aware that there’s often a long pause between Norwood Junction and West Croydon, with the train sitting still for a few minutes and no announcement from the driver.

The reason for this is that there are several railway lines that cross at this point (known variously as the Windmill Bridge Junction or the Selhurst Junction), with all trains going north out of Croydon having to fit through. The lines from West Croydon and East Croydon split here into track going to Victoria and to London Bridge, and there’s also a split into fast and slow lines to both of the latter destinations. Hence trains often have to wait for other trains to get out of the way. Network Rail’s Strategic Business Plan for 2014–2019 (PDF) identifies this junction as one of the key capacity constraints on the Sussex Route: “11 conflicting routes caused by flat junctions and longer trains”, though as far as I can tell it contains no plans to alleviate this, mentioning only a vague hope that resignalling further south at Three Bridges will allow improvements at Windmill Bridge in the future.[11]

Section of a 1908 railway junction diagram “Croydon, Norwood & Woodside RJD 53” by the Railway Clearing House, showing lines through West Croydon and East Croydon; the rather knotty-looking junction in green at the top still causes problems today. Note that “up” on this map is west, not north. Public domain image via Wikimedia Commons.

London Overground is of course not the only train operator to run services from West Croydon Station. Services to Victoria and London Bridge have been provided by Southern since August 2001.[12] These are mainly stopping (i.e. slow) services, though there are a few fast services to and from London Bridge each day.[13]

As mentioned above, until very recently the route from the rail platforms to the tram stop and bus station on Station Road was a rather convoluted one,[14] requiring a fairly long walk from the main station entrance around the corner and down Station Road — not exactly the model of an integrated transport system! However, this all changed in late 2012 when a new entrance was opened on Station Road, connecting Platform 4 directly to the pavement beside the tram stop.[15] Although perhaps more useful as an exit than an entrance (Platform 4 serves only a few destinations down towards Sutton and Epsom), it’s very handy both for those who wish to continue their journey via tram or bus, and for those who fancy popping in to the Station Road shops on the way home.[16]

The Station Road entrance to West Croydon Station, opened in late 2012. Note the style of the station sign, which reflects the branding used at the stations which were built in the north during phase 1 of the ELL extension (see photos: Shoreditch High Street, Hoxton, Haggerston, Dalston Junction). Photo: author’s own.

During discussions at the West Croydon Community Forum (of which I am a member), the importance of West Croydon Station as a “gateway” to London Road comes up over and over again.[17] Indeed, the station’s importance to the area has remained high over the 174 years since it was built (its name is almost certainly the main reason that the area is known as West Croydon rather than the more geographically accurate North Croydon[18]). As West Croydon moves into the future, with regeneration planned both as post-riot reconstruction and as part of the West Croydon Masterplan, its station is likely to play a key part.

Thanks to: Paul Sowan for fact-checking and additional information; all at the Croydon Local Studies Library; and my beta-readers bob, David, Flash, Kat, and Shuri. 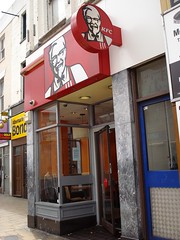 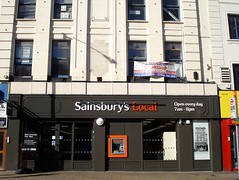 9–11 London Road: The Ship of Fools »
The weary traveller who exits West Croydon Station in search of sustenance need look no further than the Ship of Fools, a Wetherspoons pub almost directly opposite the station. Numbers 7–11 London Road were built between 1877 and 1880. In contrast to the current situation, with numbers 9 and 11 knocked into one, they were originally all separate premises. However, they were all owned by the same person — John Sainsbury, provision dealer.