As discussed earlier in this series, 2-8 London Road no longer exist — so while my schedule would suggest that today I should be writing about 4 London Road, instead I’m going to cover the genesis and initial years of West Croydon Station.

Croydon has a long association with railways. The Surrey Iron Railway, which opened on 26 July 1803 as the world’s first public railway,[1] ran from Wandsworth to Croydon via Mitcham. It was double-tracked for most of its eight-mile length, and carried goods such as iron, copper, bricks, coal, charcoal, oilseeds, and even dung, loaded into horse-drawn wagons on flanged rails.[2]

The Surrey Iron Railway initially ran to Pitlake Meadow, which no longer exists but was in the area where Reeves Corner is today.[3] The tracks did not pass through where West Croydon station now stands, but rather somewhat to the west, on the other side of what is now the Roman Way overpass.[4] However, following the opening of the Croydon Canal six years later, a short railway extension was built from Pitlake Meadow to connect with the canal at the site now occupied by West Croydon station.[5]

Surrey Iron Railway Company plaque on the outside of West Croydon Station, January 2014. Photo: author’s own.

The decades following the opening of the Surrey Iron Railway saw a number of proposals for railway lines connecting London with Brighton, many (though not all) of them intended to pass through Croydon. Unlike the older railway, these lines were planned to carry passengers as well as freight, using steam locomotives instead of horsepower.[6]

At this time, any new railway line had to be authorised by an Act of Parliament. The first of the Croydon schemes to obtain such an Act, on 12 June 1835, was the London and Croydon Railway, which would run from London Bridge to what is now West Croydon Station. The London and Croydon Railway plans at this point no longer included running to Brighton; but following the passing of this Act, other railway companies submitted proposals to use part of the route for their own planned services to Brighton, splitting off just south of where Norwood Junction Station stands today.[7]

West Croydon Station opened on 5 June 1839 under the name of Croydon Station.[8] Trains ran from London Bridge over the route of the London and Greenwich Railway for the first 1¾ miles and then on new track following the route of the old Croydon Canal, which had closed in August 1836 in order to make room for the new railway. The intermediate stations may be familiar to those who travel via West Croydon today — they were at New Cross (now New Cross Gate), Dartmouth Arms (now Forest Hill), Sydenham, Penge (now Penge West), Annerley (now spelt Anerley), and Jolly Sailor (now Norwood Junction).[9]

It should be remembered that at this time, the land between London Bridge and Croydon was much less densely-populated than it is today; indeed, it was so unpopulated that two of the stations (Dartmouth Arms and Jolly Sailor) were named after pubs that had been built to serve the locks along the canal.[10] Maps of the period show only scattered settlements along the route; see for example William Faden’s 1800 “Topographical Map of the Country Twenty Miles Round London”. M W G Skinner’s “Croydon’s Railways” confirms this, noting that when the railway opened in 1839, “Between New Cross and Croydon there was more or less open countryside so the potential for traffic was not good. The intermediate stations were provided to serve the small communities and to give them a means of travelling from place to place.”

Regardless of this, the new railway was an instant success. It carried 11,000 people on its second day of operations, which coincided with the annual Croydon Fair.[11] A decade later, Daw’s 1849 Directory of Croydon described it thus: “[the] railway from the town to the foot of London-bridge [...] is said to be one of the best formed lines of this description hitherto constructed, and has been the medium of greatly augmenting the number of visiters [sic] to this pleasant district, celebrated for the beautiful views that may be enjoyed, and for the salubrity of the air, considered so peculiarly beneficial to invalids.”[12]

On 29 July 1844, an Act of Parliament was passed stating that “the making of a Railway, to commence by a Junction from the London and Croydon Railway at Croydon in the County of Surrey, and to terminate at Epsom in the same County, would be of great public Advantage, by opening a more easy and expeditious Communication than now subsists between those Places and between Epsom and the Metropolis”.[13] This extension opened in May 1847 and connected West Croydon Station (which at that point was called Croydon Town Station[8]) to Epsom, initially running 10 trains each way on weekdays and 6 on Sundays. New through platforms were constructed to accommodate this, as previously all trains had been terminating ones. On Derby Day of the same year, the new line carried a total of 32,000 passengers, and by the turn of the century the weekday service frequency had increased to 26 down (away from London) and 24 up (towards London).[14] 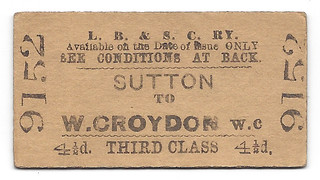 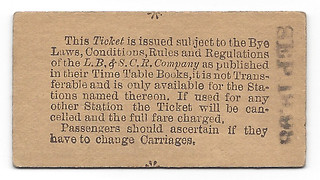 Front and back of a third-class railway ticket from Sutton to West Croydon, issued by the London, Brighton and South Coast Railway (LB&SCR) and dated 18 September 1898. Photos (and ticket): author’s own.

Another extension opened in October 1855, running from West Croydon to Wimbledon, partly along the old route taken by the Surrey Iron Railway in its journey to Wandsworth via Mitcham.[15] Unlike the Epsom extension, this was not a through service; the Wimbledon trains started and terminated at West Croydon (which by then was in fact finally actually called West Croydon[8]). A new terminating platform was added to accommodate this.[16] The Wimbledon branch initially ran only 6 trains per weekday and 2 on Sundays; by the turn of the century these frequencies had increased only slightly, to 10 or 12 trains per day as of 1910.[17]

As mentioned above, when the station first opened it was called not West Croydon Station but Croydon Station, and the name remained the same until 1847 at which point it changed to Croydon Town Station. East Croydon station also opened as “Croydon Station”, in 1841, and according to Skinner it’s unclear when the name officially changed to East Croydon. So between 1841 and 1847 there seem to have been two stations both named “Croydon”, just ten minutes’ walk apart; one wonders if this was confusing to the residents at the time.[18]

Another difference from the present day is that the station entrances in the 1800s were not where they are today. As noted above, when the station first opened, the only service was a terminating one from London Bridge; hence only one entrance (and platform) was needed. This entrance was on the London Road side, though set somewhat further back than the current London Road entrance and also slightly to the north of it; today, the location of this entrance is basically the back of the car park. Old drawings show this as looking fairly grand, which fits well with the importance it would have had for the town.

After the through services to Epsom commenced in 1847, a new entrance was opened on Station Road.[19] This one was quite near the current Station Road entrance; in fact, the old station buildings on this side are still standing, though today they’re occupied by Supreme Motor Spares.

Thanks to: Peter Clark for fact-checking and additional information; Mark Justice for the loan of railway books; all at the Croydon Local Studies Library; and my beta-readers bob, Flash, Kat, Shuri, and Steve. 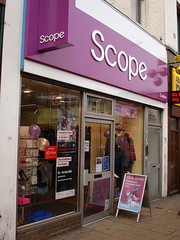 « 3 London Road: Scope
The Scope shop at 3 London Road opened as a National Spastics Society shop in September 1993, and rebranded following the parent charity to Scope in early 1995. The building was probably constructed between 1847 and 1859, and its first appearance in historical street directories was in 1859, with the occupant listed as Henry Davis, butcher. 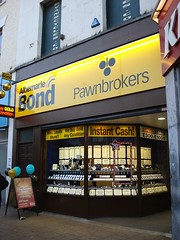 5 London Road: Albemarle Bond »
5 London Road was probably built between 1847 and 1859, at the same time as number 3 next door. It first appears in street directories in 1859; Gray and Warren’s Croydon directory for that year lists the occupant as Henry May, “hosier, shirt-maker, &c”.