The current occupant of 5 London Road is Albemarle Bond, a pawnbroker and payday loan shop. Albemarle Bond’s tenure at this address began in December 2011, though this wasn’t their first London Road branch — they used to occupy the large building at number 60-62, on the corner of Oakfield Road, before this was burned out in the August 2011 riots[1]. 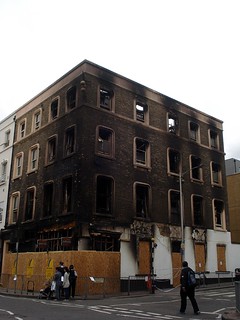 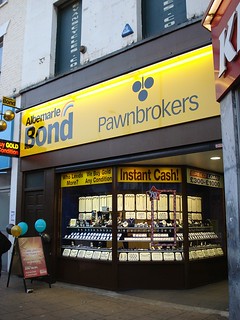 As I noted earlier in this series, 5 London Road was probably built between 1847 and 1859, at the same time as number 3 next door. It first appears in street directories in 1859; Gray and Warren’s Croydon directory for that year lists the occupant as Henry May, “hosier, shirt-maker, &c”. The use of the premises varied from auctioneers to coal merchants over the next few years, but by the early 1870s, F A Egleton, oil and colourman, was firmly in place[2].

The term “colourman” may be familiar to readers of Arthur Conan Doyle’s Sherlock Holmes story, The Retired Colourman, but the profession of oil and colourman is one of many rendered obsolete with advancing technology. This type of business stocked oils for cooking, heating, and lighting, and also sold paints — which at that time did not come ready-mixed in tins, but rather were mixed to order by the colourman, from linseed oil and ground pigments[3].

F A Egleton remained at 5 London Road for around 40 years, during which time the remit of the business expanded to include ironmongery and other activities. It also expanded physically, around 1882, into the next-door premises at number 7. By 1904, although the building was still in use as an oil and colour merchants, the company in residence was Dayburns Ltd and the business had shrunk back to a single address at number 5 alone. The name soon changed again to Grove Bros, but by 1910 the oil and colour merchants had finally left and the address was marked as unoccupied[4].

The next occupant of the premises was Jay’s Furnishing Stores, a hire-purchase furniture store first listed in Ward’s 1911 directory. I’m not sure where Jay’s originated — in Croydon or elsewhere — but in any case it appears to have ended up as a national chain, with branches in places such as Bristol[5], Luton[6], Northampton[7], and Sheffield[8], as well as areas of London including Palmers Green[9], Stoke Newington[10], and Walthamstow[11].

An advert placed in the Croydon Times on 9 June 1928 lists two Jay’s shops in the area, at 5 London Road and 59 Thornton Heath High Street; this advert also proclaims Jay’s to be “The world's largest furnishers for the world's best terms”. Another Croydon Times advert from 31 October in the same year gives an idea of the type of furniture on offer: a “luxurious Chesterfield suite” for 10 shillings per month, and a “solid oak bedstead” for 6 shillings per month[12]. For those wondering about the type of person who might shop at such an establishment, long-term Croydon resident Terry Coleman tells me that “there were a number of independent furniture shops years ago and of course they all did HP [hire purchase] before the days of plastic cards. It was the only way to buy major items unless you were quite well off.”

Jay’s Furnishing Stores advert from the Croydon Times of 14 July 1928, courtesy of the Croydon Local Studies and Archives Service.

Jay’s seem to have been quite on-the-ball in terms of advertising; one interesting item I found while browsing the archives of the Croydon Local Studies Library was a small booklet published by Jay’s on “20 ways of cooking fish”. There may seem to be little connection between furniture and fish, but Jay’s give a reasonable excuse for this on the cover: “Our object has always been a double one — to supply the Best Value in Fine Furniture and to ensure a Happy Home to each of our customers — by freedom from worry — Every housewife knows what part cooking plays in making a happy home.” (For more on this booklet, and my attempt to cook one of the recipes, see The Vintage Cookbook Trials). 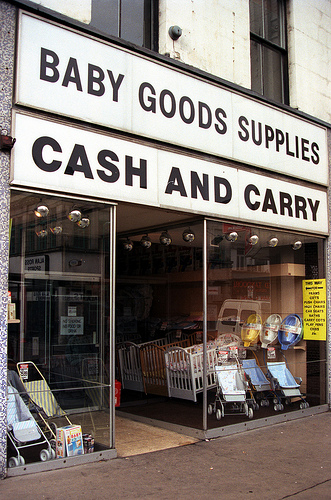 By c.1962, 5 London Road was occupied by Davies Baby Carriages, which remained in place until the late 1980s. Davies was a local firm which was established at 29 London Road in 1922 and later spread to other areas of London[14].

Following the departure of Davies Baby Carriages, 5 London Road continued to sell prams, cots, pushchairs, and other baby-related goods for a short while, though under a generic name and with a focus on cheapness. As shown in the photo here, as of c.1990 the sign on the frontage simply read “Baby Goods Supplies” with a qualifier of “Cash And Carry” below. There’s also some evidence of a “temporary gift shop” at the address around this time.[14a]

Evans Cycles opened their fifth branch at 5 London Road on 19 May 1990, and started mail order from there in 1991. They continued to operate their mail order service from the Croydon store until 1997, when they opened their first warehouse in Leatherhead.

Evans finally closed their London Road branch in November 2011, after having been approached by Albemarle Bond, who were looking for a new location for the store they’d lost in the riots. Evans, who by this point were the owners of the building, agreed to lease the premises to Albemarle Bond — it was one of their lower turnover stores, and they’d found their customers had trouble accessing it by car. However, Evans remained keen to operate in the Croydon area, and as of the time of writing, they’ve confirmed a new site on the Purley Way and will be opening there in mid-2013[15].

Thanks to: Mike Rice at Evans Cycles; Terry Coleman; Brian Gittings; all at the Croydon Local Studies Library; and my beta-readers Flash, Helen, and Shuri. 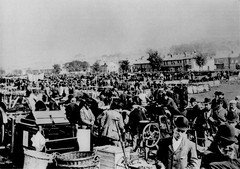 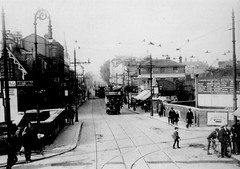