The building was constructed around 1869–1872,[1] and for the next half-century was occupied by a series of drapers and costumiers. The first of these was William Creak, draper, who appears in street directories from 1872 to 1880. He also briefly expanded into number 23 a few doors down, but shortly after doing this he vanished from London Road altogether and was replaced at number 29 by another draper, Charles William Chapman.[2]

Charles Chapman had a much longer tenure, lasting until around 1912 before giving way to Madame Waller, costumier, who remained in residence for the next decade.[3]

Davies advertisement in the Croydon Times of 20 June 1928, reproduced courtesy of the Croydon Local Studies Library and Archives Service.

The company also sold high chairs, playpens, cots, and toy prams.[7] An advertisement in the Croydon Advertiser of 16 July 1932 states confidently that “Toy prams are best when they are bought at a pram shop”, and notes that “Davies Toy Prams are perfect Models made in the same factories as our Prams”. Other items on offer included invalid chairs[8] (a type of wheelchair) and mangles[9] (a device for pressing water out of wet laundry).

There is a curious anomaly here in that London phone books during the 1950s list two companies sharing the same addresses at both 27 London Road and 95A South End: F Meyers as above, and Mayles Ltd, another greengrocery chain which had been at 27 London Road since 1938. It’s possible that Meyers and Mayles were in some kind of partnership, though as far as I can tell from phone books, they didn’t share any addresses outside Croydon.

South End, 1970. Meyers at 95A South End is the fifth shopfront from the left, though it isn’t clear whether it’s still open at this point. Cropped by permission from a photo © Roger Perriss. (See also my photo of a similar view from October 2013.)

Meyers was an extensive chain, much larger than Mayles. Roger Hooton, whose father worked for Fred Meyers from the late 1940s to the 1960s, recalls that the company had around 300 greengrocer shops throughout London, Middlesex, and the South East. Roger also told me that Fred’s brother Gerrard had another chain of greengrocers called Gerrards, and that although F Meyers and Gerrards were run as two separate companies, the brothers had an agreement not to have their shops in the same areas. Roger’s father would sometimes help out at Gerrards when they were setting up new shops. Roger added: “Meyers and Gerrards used to have their annual staff party and dance at Seymour Hall, Royal Oak (Paddington area) and it was a big family affair with kids given special gifts. Fred and Gerrard always looked after their staff. The dance band was always Victor Sylvester who was Britain's top dance band.”[13]

By 1964, Meyers had divested itself of the London Road branch, keeping only the florists at 95A South End.[14] Here there appears another gap in the record, as the next occupant I’m aware of is Brian Laker Typewriters. This company was at 29 London Road by 1974, but by 1977 it had moved to 85 Station Road, around the other side of West Croydon Station.[15]

Brian Laker’s replacement at 29 London Road was Fingertips nail salon, which remained here until around 1982 before moving to the upper floor of 181 North End (on the corner of Derby Road, currently occupied by Zam Call).[16]

Following the departure of Fingertips, it would be another 20 years before manicure services returned to 29 London Road. First came insurance brokers — Anthony Gover Ltd from 1982 to 1986,[17] and the Swinton Insurance Group from around 1986 to around 1989[18] — and next came travel agencies. Sky Travel was the first of these, but had a very brief tenure as by 1992 it had been replaced by Riz Travel Centre. Riz lasted until the end of the 1990s, when it was briefly replaced by Trinity Travel & Tours Ltd.[19]

By 2002, Silky Nails manicurist was in place, and by 2005 this had become Snow Nails & Beauty, which remains there today.[20] As well as manicure stations, it has four comfortable-looking pedicure stations, and a selection of nail polishes and nailcare products for sale. By mid-2012, it had opened a second branch on Wellesley Road, which again remains there today.[21]

The author’s nails after a manicure and polish at Snow Nails & Beauty, October 2013. Photo © bob walker. 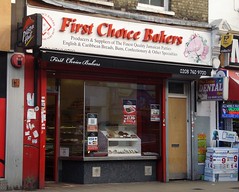 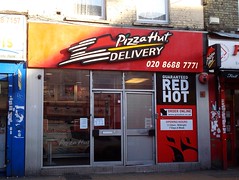 30 London Road: Pizza Hut »
The Pizza Hut branch at 30 London Road is one of the longer-standing businesses in the area — it’s been serving up takeaway pizzas for around a quarter of a century.