1860s–1870s: Construction of Oakfield Terrace; differences between the two halves

There are only very minor differences between the two halves of the terrace. The cornices of numbers 28–34 bear small rectangular downward-pointing crenellations, in contrast to the outward-pointing triangles adorning those of numbers 36–42. Both sets of buildings have a vertical fan detail in the brickwork above the windows, but the fans on numbers 36–42 point further outwards and have a larger central keystone. Today, these differences are most easily visible on the frontages that haven’t been painted/plastered over, namely First Choice Bakers itself, and Suave Living and Western Centre further up at numbers 36 and 38 respectively.[2] 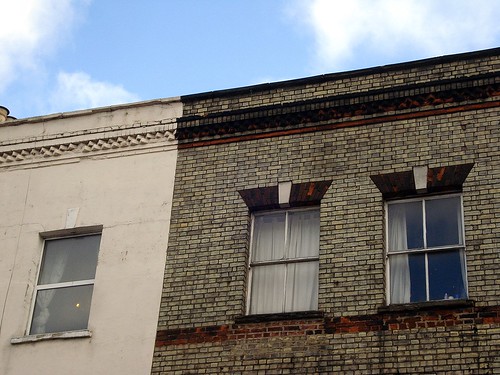 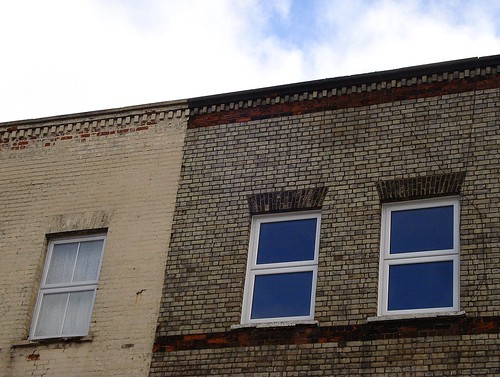 The first occupant of 1 Oakfield Terrace — or 28 London Road as it’s known today — was Thomas G Newton, general furnishing ironmonger, who was in place by 1873 but gone again by 1878. His replacement was a bootmaker named Frederick Penn, though he also had a short tenure lasting only until around 1882.[3] 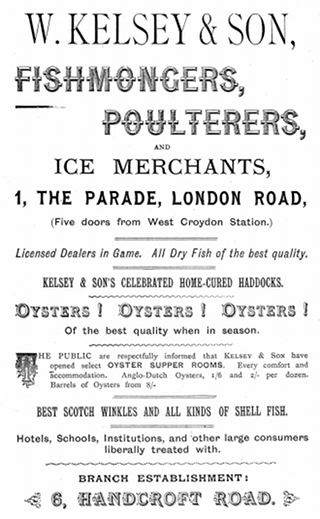 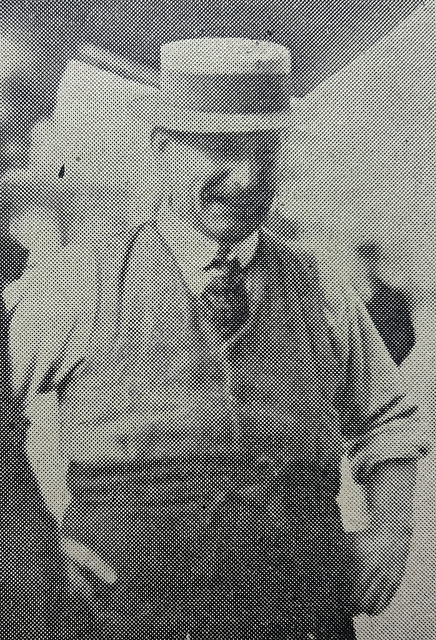 The next type of retail to take place on the premises was rather longer-lasting. Around 1884, William Kelsey opened a fishmongers which was to remain under various owners for over three decades. By 1888 the business was known as W Kelsey & Son, trading as a fishmonger, poulterer, and ice merchant with a second branch at 6 Handcroft Road.[4]

In an advertisement from the same year (shown here), W Kelsey & Son proudly advertised its own “celebrated home-cured haddocks”, “best Scotch winkles and all kinds of shell fish”, and “all dry fish of the best quality”. The “oyster supper rooms” mentioned here may have been on the first or second floor of the building.

As shown in the advertisement, by this point Oakfield Terrace had been renamed to The Parade; according to Ward’s street directories, this happened around 1885–1886. I haven’t been able to find out why this renaming took place.

Note also the claim that W Kelsey & Son was only “five doors from West Croydon Station”. At this date, there were indeed only four other properties between here and the closest railway building: W H Morgan, fruiterer, at the modern number 16; Mrs Kingsland’s registry office for servants at number 18; Samuel Piggott, gasfitter and ironmonger, at number 20; and Henry G Dean, greengrocer and fishmonger, between 20 and 28.[5] However, this closest railway building was not on the site of the entrance today, but rather on the site now occupied by numbers 12–14.[6]

After a couple of years of vacancy, John Joyce’s dairy arrived at the premises around 1920, and remained in place for the next decade. This business was listed in contemporary phone books as Joyce’s Dairies, and in Ward’s street directories as North Park Dairy. It also had a branch on Lower Addiscombe Road and two branches in Thornton Heath (one further up London Road and another on Bensham Lane). I haven’t found any evidence of branches outside the Croydon area, so it seems to have been a fairly small, local concern.[8]

By early 1929, Joyce’s dairy had been swallowed up by a much larger company — the Express Dairy Co Ltd. This already had a presence in Croydon, with branches on the High Street and on Shirley Road in Addiscombe, but it also took over all four of Joyce’s branches.[9] 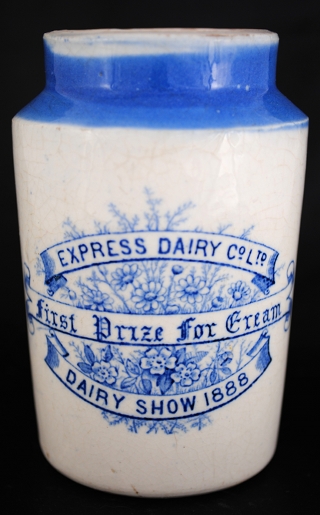 Established in 1864 by George Barham, the Express Dairy Co was a strong innovator in its field. At the time of its founding, it was one of the first dairy companies to use the railways to bring fresh milk into London from farms in the countryside, rather than relying on cows kept within the city itself. George Barham is also credited with inventing new dairy equipment, including steel milk churns based on similar containers used by breweries.[10]

The branch at 28 London Road was one of these cafés for at least part of its life; a photo held at the Croydon Local Studies and Archives Service shows it with “Express Dairy Co. Ltd.” on the frontage and “Express Cafe” on a small projecting sign.[11] Some clues as to the type of food served at the Express Dairy cafés may be gleaned from a scene in Chapter 2 of Michael Innes’ mystery novel Secret Vanguard, published in 1940. This scene is set in the Express Dairy near the British Museum,[12] and one of the characters (a museum curator) is described as having ordered a glass of milk and some baked beans on toast.

A model of the Express Dairy Co branch at 28 London Road, part of the “West Croydon” tram layout built by John Clarke on the basis of photographs provided by Croydon Local Studies Library. This photograph taken by the author at the 2014 Croydon Model Railway Society exhibition in Warlingham.

I’m not sure whether the Express Dairy Co used 28 London Road for retail and refreshments at the same time, or whether the use of the premises changed during its tenure. It’s not a large space, and for most if not all of the time the Express Dairy Co was in residence, there was also a dentist practising on one of the upper floors. While the building does have three floors, and hence it’s possible that the Express Dairy Co had two of them, I think it’s most likely that the dentist was on the first floor, and the second floor was residential.[13]

Old dental surgery signage still visible on the first floor of 28 London Road (photo taken in November 2012). I’m not sure which dentist put this up, but the 01 dialling code was introduced in 1959 and split into 071/081 in 1989,[14] which gives at least some clue for the writing in the window, though the projecting sign remains a mystery. Photo: author’s own.

This was certainly the case by the mid-1950s, by which point the ground floor business had become a branch of Dr Scholl’s Foot Comfort Service, the first floor was the business place of F W Fuller, dentist, and the top floor was the residence of Mrs Irene Rivers Pitt, manager at Dr Scholl’s two floors below.[15]

In December 1956, newlywed Jenny Walker moved in to the top floor of 28 London Road, having taken over the flat (though not the manager’s job) from Mrs Rivers Pitt, who was the mother of one of her schoolfriends. During her six years on London Road, Jenny used several local businesses. She bought fish and chips every Friday from the fish shop at number 30, shopped on Saturday mornings at the Sainsbury’s at numbers 9–11 before going for lunch at the Minerva restaurant at number 16, and worked at home in the evenings addressing envelopes for Mrs Sanders’ mailshot business above number 34. Her children’s pram came from Davies Baby Carriages at number 5.[16]

Dr Scholl’s remained at 28 London Road until the mid-1980s, when it was replaced by Atlas Employment Agency, a company that also had branches at 24 George Street and 14 Streatleigh Parade in Streatham.[17]

Atlas was followed by Anthony Gover Property Services, which was in place by 1993 but had been replaced by Carlton Property Services — perhaps simply a renaming of the business — by 1995. Next came Staff Scene Services employment agency, which was open by May 1997 and remained at the property until early 2001.[18]

A period of vacancy followed, but by June 2005 First Choice Bakers had moved in.[19] The company was founded in 1995 and has another branch at 40 Atlantic Road in Brixton as well as a wholesale unit in Mitcham.[20] Its Croydon shop is open 9am–6pm Monday–Saturday, selling Caribbean breads such as bun and hedgehog bread, several flavours of Jamaican pattie, and hot food such as chicken wings.

Thanks to: Brian Gittings; Zom; John Clarke; Colin Withey; all at the Croydon Local Studies Library; and my beta-readers Flash, Kat, and Shuri. Census data and pre-1985 phone books (aside from 1923 Croydon & District) consulted via Ancestry.co.uk. 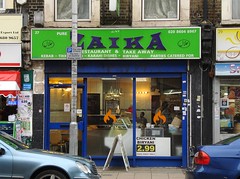 « 27 London Road: Zaika
Zaika at 27 London Road is a Pakistani cafe and takeaway with around a decade’s service in West Croydon. The history of the building includes chemists, dentists, a post office, Leach Bros fishmongers, and the F Broomfield bakery chain. 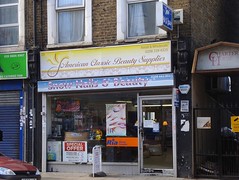