A-Z Pharmacy at 20 London Road is both one of the oldest buildings on this part of the road and one of the longest-standing businesses. The building has been in use as a pharmacy since the mid-1980s, with the current owner in charge since the turn of the century.

The first occupant was Henry Anscombe, who appears in Croydon street directories from 1855 to 1869. The 1861 census lists his home as 2 Railway Cottages, and the 1868 Town Plans show it as part of a small block of buildings adjacent to the station entrance.[1]

The 1861 census also includes Mr Anscombe’s wife Eleanor and five children, as well as his widowed sister, Jane Austin. Mrs Austin was a monthly nurse, probably staying with her brother in a break between live-in nursing jobs.[2] Henry Anscombe himself was the superintendent of railway police at London Bridge Station.[3] The Anscombe family remained at 20 London Road until around the end of the 1860s, before moving to St Thomas’s Street in Southwark.[4]

The next inhabitant might have been an upholsterer named J E Hastings, but I don’t have enough evidence to decide whether said upholsterer was here or next door at number 22.[5] In either case, J E Hastings’ tenure on London Road was very brief; Ward’s 1874 directory lists a gas-fitter and ironmonger named Piggott at the modern number 20 and a greengrocer, fishmonger, and poulterer named J Dossett at the modern number 22.[6] 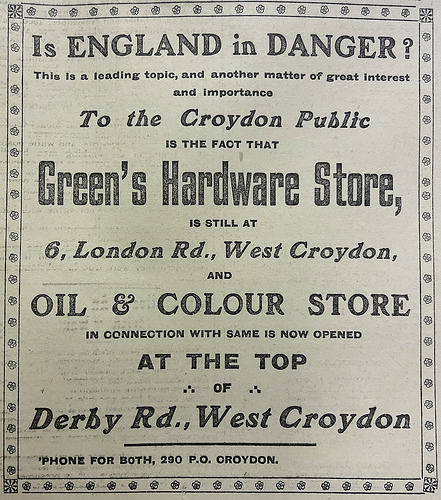 Advertisement for Green’s Hardware Store on page 3 of the 29 March 1909 Surrey Evening Echo. Note that 6 London Road was renumbered to 20 London Road in 1927.

From 1904 to 1924, street directories list the property as Green’s Hardware Store. I don’t know the significance of the change to this name from the simple “Joseph Linden Green”. I did wonder if it marked Joseph’s bringing his oldest child into the business, but according to census data, Joseph and his wife Laura had only been married since around 1891, so wouldn’t have had an adult child in 1904.[8]

My next theory was that the name change might have coincided with Joseph’s business doing well enough that he decided to use the entirety of the London Road property for business purposes and move his domestic situation elsewhere, but according to Ward’s street directories he’d already been living on Wellington Road since around 1897.[9] In any case, it seems clear that the Green of Green’s Hardware store was our Joseph Linden Green.

The last appearance of Green’s Hardware Store is in Ward’s 1924 directory; the 1925 edition lists the property as “unoccupied”. Joseph Green would have been around 60 at this point, so may well simply have decided to retire.[10]

Street directory listings from Ward's 1925 and 1928 Croydon Directories, showing the first and last appearances of Betty, milliner and costumier. (Note that London Road was renumbered in 1927.) Reproduced courtesy of Croydon Local Studies Library and Archives Service.

The next occupant of the property came via a slow move sideways from number 22 next door. Betty, milliner and costumier, began operating from 22 London Road in 1922. Around 1926, she expanded her business to number 20 as well, and around 1929 she gave up number 22 and settled in number 20 alone.[11] “Settled” is perhaps the wrong word here, though, since by early 1931 she had vacated London Road entirely.[12]

Betty was replaced by Greens, ladies’ outfitters. Greens’ sojourn at 20 London Road was brief,[13] but an idea of its business can be gleaned from a small advertisement for staff, placed in the 1 October 1932 issue of the Croydon Advertiser: “COATS AND GOWNS.---First Sales, able to take charge, dress windows, etc; also experienced Sales ladies; medium class trade.---Apply between 3 and 5 Wednesday, 20, London Rd, Croydon.”[14]

By early 1933, Greens had been replaced by another ladies’ outfitters known as Dawsons, which remained at the premises until at least the early 1940s.[15]

There is a gap in the record here, as the next documentary evidence is of M Richman, furniture dealer and bookseller, listed in Kent’s 1955 and 1956 directories.

A model of M Richman’s shop at 20 London Road, part of the “West Croydon” tram layout built by John Clarke on the basis of photographs provided by Croydon Local Studies Library. This photograph taken by the author at the 2014 Croydon Model Railway Society exhibition in Warlingham.

From the late 1950s to the mid-1960s, 20 London Road was a branch of Etam, a ladieswear shop with other branches nationwide. Its first Croydon branch was at 34 North End, which today is occupied by WHSmith.[16] The London Road branch opened in 1957 or early 1958 and had closed by August 1965, though the North End one remained open.[17]

The next occupant was Diamond Records, in place by August 1965.[18] Journalist Mick Brown recalls a Saturday job there a year or so later, “selling Wilson Pickett and Sam & Dave records to mods”. Mick adds: “The shop used to be rammed on a Saturday - mods who had heard records at the Orchid and Top Rank Suite and the Orchid, Purley coming in to buy them; and West Indians coming in for the new Blue Beat records. It was like a party.”[19]

On 22 May 1981, an Extraordinary General Meeting of “Pendeve Limited (Trading as Diamond Records)” was held at 20 London Road, and passed a resolution stating “that the Company cannot by reason of its liabilities continue its business, and that it is advisable to wind up the same”.[20] Two days later, a planning application was submitted to change the use of 20 London Road from a shop to a “specialist Employment Bureau for catering trades”. (Permission was granted, but a note attached to the application states that this permission was not taken up.)[21]

By November 1982, the property was occupied by a household goods shop called Bargain Finders,[22] and by April 1986, Bargain Finders had become Goulds chemists, which remained on London Road for a good 15 years.[23] Goulds was prominent enough to appear in a 1995 feature in the Croydon Advertiser, focusing on London Road. Its entry there states that as well as the usual chemists’ products it stocked “a wide range of Afro hair products” and provided services such as ear piercing, film processing, and pregnancy testing. It also had “an up-to-date computer system storing patient medication records”.[24]

A-Z Pharmacy opened on 1 June 2001, and is still there today. Owner Mr Sotubo tells me that he chose the name for its connotations of covering everything that a customer could possibly need.[25] His ambition seems to have been realised, since I for one use it frequently. The staff are helpful and friendly, and a private consulting room is available for confidential consultations. Open seven days a week, it dispenses prescriptions and provides sexual health and “stop smoking” services, as well as selling various useful items from baby teethers to denture tablets.[26]

Thanks to: Mr Sotubo and the staff at A-Z Pharmacy; Mick Brown; Brian Gittings; John Clarke; Colin Withey; the Planning Technical Support Team at Croydon Council; all at the Croydon Local Studies Library; and my beta-readers bob and Steve. 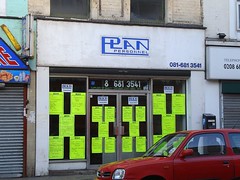 « 19 London Road: Plan Personnel
19 London Road is currently a branch of Plan Personnel, an employment agency with several branches around London and the South East. The building was constructed around 1863 as part of a block with numbers 13–17, and the first recorded occupier is listed in Simpson’s 1864 street directory as John Wood, draper. 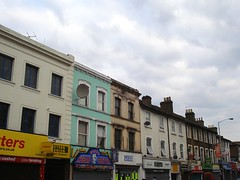 21 London Road, part 1: In the beginning »
Looking at this area of London Road today, one could be forgiven for assuming that number 21 was built as part of a block with numbers 23–29. These properties are architecturally similar to each other, all of the same height, and clearly different from their taller neighbours just to the left. However, the historical evidence indicates that in fact number 21 was constructed at the same time as the very different-looking buildings at numbers 13–19, while numbers 23 upwards came later.