The final member of the payday loan shop cluster around West Croydon Station is at number 16. The Money Shop opened in late 2011 on a site that, several decades earlier, was occupied by a rather different type of financial institution. 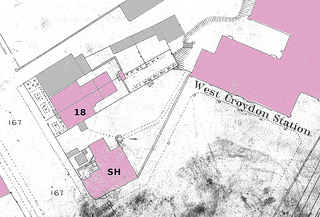 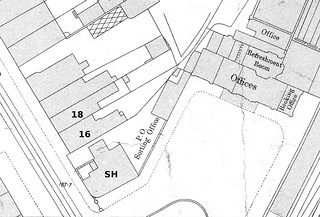 1:500 Town Plans from 1868 and 1894–5. The 1868 image is scanned from a monochrome edition and coloured with reference to a colour edition. Dark grey smudges are damage on the originals. I have marked Station House with “SH” and the properties now numbered as 16 and 18 with the corresponding numbers. London Road runs diagonally across the bottom left corner. Note that the entrance to West Croydon Station was set much further back from the road in those days. Base map images courtesy of Croydon Local Studies Library and Archives Service.

It’s not clear what the first use of the building was. It’s tempting to assert that this was the “Providence Villa” listed between West Croydon Station and Mrs Kingsland’s Registry Office for Servants in street directories from 1876 to 1885,[2] but as street numbers weren’t assigned to the east side of London Road until 1890, it’s hard to prove this directly. I’m quite sure that Mrs Kingsland’s office was at the current number 18,[3] and the 1868 and 1894–5 Town Plans make it clear that there was little space for anything aside from Station House and (potentially) Providence Villa between the station and Mrs Kingsland's office.

On the other hand, a plan included in the sales particulars for a building plot on Oakfield Road, auctioned by Podmore & Martin on 12 July 1877,[4] shows the site of modern number 16 to be vacant. The only date given on this plan is the date of the auction, so it could have been produced earlier. To reconcile this with the appearance of Providence Villa in Ward’s 1876, the plan would have to have been several months out of date by the time of the auction.[5] However, this isn’t out of the question. The relevant building plot was part of the old Oakfield Estate, which was auctioned off in pieces over a long period of time,[6] so it’s quite possible that the same base plan was used over and over again.

Another possibility is that “Providence Villa” was a fanciful renaming of Station House; as noted in my article on 12–14 London Road, Station House was used as the stationmaster’s house for some time. However, street directories note that the stationmaster in 1876 and for some time afterwards was Alfred James Webley, who seems unlikely to have been part of the family of Mrs Cross,[7] and who in any case is listed separately at the station itself. 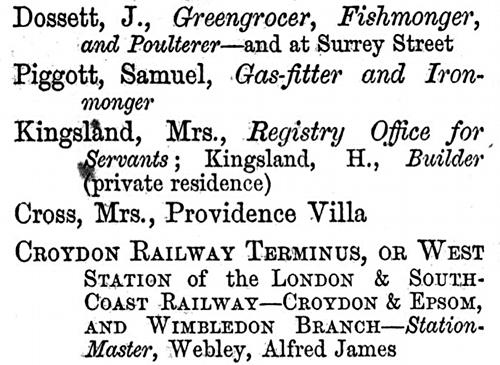 Ward’s street directory entries for 1876 and 1888, reproduced courtesy of the Croydon Local Studies Library and Archives Service. In 1876, Mrs Cross at Providence Villa is listed between the station and Mrs Kingsland, while in 1888, W H Morgan has taken her place.

According to a notice on page 4850 of the 20 October 1885 London Gazette, Mrs Cross died on 5 September 1885. The next edition of Ward’s directory, published in 1886, lists W H Morgan, fruiterer, between the station and Mrs Kingsland — no further mention is made of Providence Villa.

Mr Morgan was replaced by William Goodsell, fruiterer and greengrocer, around 1913, who in turn was replaced by Amalgamated Fruiterers Ltd around 1929. The run of fruit and vegetable purveyors ended just a couple of years later; by 1934, the property was occupied by “Carvers, Ham & Beef”.[8] 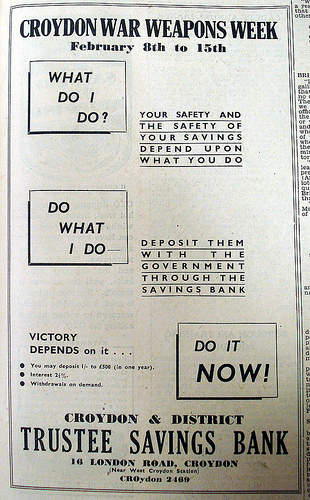 On 26 September 1935, the Croydon & District Trustee Savings Bank opened its first branch — and head office — at 16 London Road.[9] There were around a hundred other Trustee Savings Banks in the British Isles at the time, and the Croydon bank was one of three set up during 1935, the others being in Ilford and Cambridge.[10] The Croydon Times of 28 September 1935 reports that the bank was formally declared open by the Mayor of Croydon, Alderman J Trumble, who “said he was interested in the venture because it made for thrift, which, in turn made for prosperity.” The article emphasises that the bank would be “a local institution, managed by Trustees who were local people.”[11]

The Trustee Savings Banks were the predecessors of the TSB Group, which later merged with Lloyds Bank to form Lloyds TSB.[12] However, they were originally intended to provide an alternative to the commercial banks.

An article in the Coulsdon and Purley Times of 6 September 1935 provides a short history in connection with the upcoming opening of the Croydon branch: “The movement originated over 120 years ago when there were few, if any, thrift organisations which provided absolute security for the poorer sections of the community. The commercial banks of those days, the precursors of the modern joint stock banks, would not accept deposits of less than £10, which represented a very much larger sum in those days than it does now.”

The article further notes the contrast with the Trustee Savings Banks, which were run by unpaid, voluntary trustees: “Deposits may be made with sums of one shilling upwards, and as soon as one pound has been saved the account begins to bear interest at the rate of 2½ per cent. compound.”[13]

By the time the Croydon bank was set up, the Trustee Savings Banks had come under Government supervision, and they continued to emphasise financial responsibility. On 1 February 1936 the Croydon Times reported on a new method of paying the rates imposed by the Croydon Corporation (similar to our modern-day council tax). A “circular” would be distributed with each rate demand, describing the bank and stating that “the bank is prepared to open a deposit account with any ratepayer for the purpose of saving for rates... the sums so deposited, with accrued interest, to be paid to the Corporation against rate demands and electricity accounts sent by the ratepayer to the bank.” The bank’s annual report for 1937, quoted in the Croydon Times of 25 December that year, states that “The scheme of ‘Saving for rates,’ arranged by Croydon Corporation, continues to be used extensively.”[14]

Collective financial responsibility was considered as important as individual responsibility. Following the outbreak of the Second World War, the Trustee Savings Banks joined with the National Savings Committee and the Post Office Savings Bank in urging the populace to deposit their spare cash to assist the war movement. A statement on 21 November 1939 by the Chancellor of the Exchequer, announcing the War Finance Campaign, included the assurance that “any increase in the money deposited in these banks will serve the same National purpose as money invested in the new securities.”[15]

On 8 June 1940, the Croydon Advertiser and Croydon Times printed an appeal from the Mayor of Croydon for the people of Croydon to join in the upcoming National Savings Week of 9–15 June: “The object of National Savings Week is to bring home to everyone the vital need to turn danger into victory by providing the money to make the planes and tanks and guns without which no valour can prevail. [...] But save ‘until it hurts’ and lend to your Country in the sure and certain knowledge that you are rendering a very great service.” The Croydon Trustee Savings Bank was one of the institutions recommended by the Mayor as a repository for these savings.

The Croydon and District Trustee Savings Bank remained on London Road until April 1942, when it moved to Equitable House, 1 Wellesley Road.[16]

16-18 London Road in the 1940s and in 2013. The 1940s image shows a tea lounge called Barrycafs at number 16. Note the man in uniform about to enter; this may be a coincidence, but it’s of interest to note that the building next door at 12–14 was in use as a military recruiting centre during part of its history. Photo: author’s own, taken using an archive photograph courtesy of Croydon Local Studies Library and Archives Service. 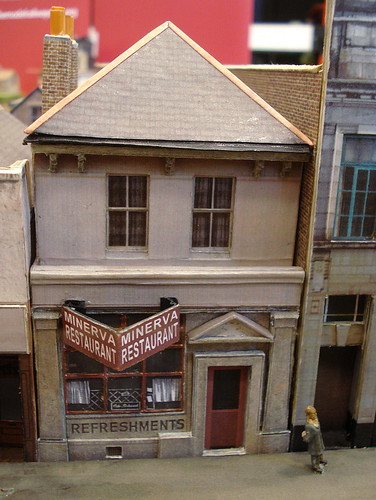 A model of Minerva Restaurant, 16 London Road, part of the “West Croydon” tram layout built by John Clarke on the basis of photographs provided by Croydon Local Studies Library. This photograph taken by the author at the 2014 Croydon Model Railway Society exhibition in Warlingham.

Much of the remaining history of 16 London Road was filled by a succession of cafés and restaurants. There’s evidence of a tea lounge called Barrycafs in the 1940s,[17] but by 1955 this had been replaced by the Minerva Restaurant.[18] The Minerva seems to have played quite an important role in the social lives of the people living on and around London Road — several of the people I’ve spoken to while researching this series of articles remembered it fondly.

Jenny Walker, who lived on London Road in the late 1950s and early 1960s, recalls: “We used to go there every Saturday, do the big shop [at Sainsbury's] in the morning and then go and have our, sort of small lunch, in the Minerva. [...] Lamb chops, and roast potatoes or something like that.”[19]

Shirley Locke, who lived in Broad Green between the mid-1950s and mid-1970s, has similar memories: “When I first met my husband, we used to go there Sunday nights and have our dinner. [...] Steak and chips, and things like that, or egg, and fish, you know, plain things.”[20] 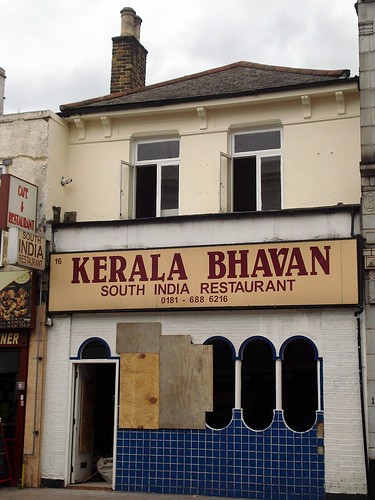 Kerala Bhavan, 16 London Road, August 2011. The boarded-up windows were probably smashed in the riots – a lot of damage was sustained on this part of London Road. At the time this photo was taken, the restaurant had already closed and there was shopfitting work going on inside. Photo: author’s own.

The Minerva remained in place until at least 1974,[21] but then transformed into a rather different type of restaurant. A planning application from June 1977[22] proposed a new frontage sign: “Bangla Desh Curry Centre / Tandoori Restaurant / Take Away Service / Special English and Indian Food / Fully Licensed”. Several other Indian restaurants followed, with names including Agra (or possibly Aggra), Ramas, Gandhi Tandoori, Ahmed Tandoori, and South India Restaurant.[23]

The final Indian restaurant to find a home at 16 London Road was Kerala Bhavan. This name was first used around 1999, though given the presence of “South India Restaurant” as a subtitle on the frontage sign (as of 2011, at least), it’s possible that this was simply a renaming of the previous eponymous incarnation.[24]

As a fan of South Indian food, I was excited to see this so close to my house when I moved to West Croydon in July 2011. However, it was already in the process of becoming a payday loan shop at this point,[25] so I never got to visit Kerala Bhavan itself. The Money Shop opened just a few months later.

Thanks to: Jenny Walker; Shirley Locke; Brian Gittings; Karen Sampson at the Lloyds Banking Group Archives; John Clarke; Colin Withey; the staff at the Surrey History Centre; the Planning Technical Support Team at Croydon Council; all at the Croydon Local Studies Library; and my beta-readers Henry and Kerry. 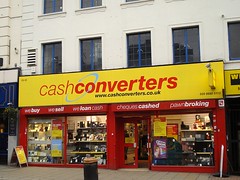 « 13–15 London Road: Cash Converters
13–15 London Road was built in 1863, as part of a block with numbers 17, 19, and probably 21. At this point, the lots on either side of this block hadn’t yet been built on, and the nearest neighbours fronting on London Road would have been at numbers 5 and 31. 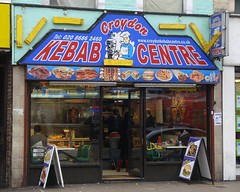