17 London Road is the home of the Croydon Kebab Centre. This informatively-named shop is one of the longer-standing businesses on this part of London Road; it’s been a purveyor of grilled meats since at least the mid-1970s, under the current name since the mid-1990s, and under the current management since 2005.

As noted in an earlier article in this series, number 17 was built in 1863 as part of a block with numbers 13–15 and 19. The first occupant was Benjamin Gibbins, who appears in Simpson’s 1864 directory as a poulterer, grocer, and cheesemonger. By the mid-1870s Mr Gibbins also ran a post office, money order office, and savings bank, with letters dispatched daily at 8:45am, 12:30pm, 4:15pm, and the oddly-specific 8:39pm.[1]

Around 1885 the business was briefly taken over by John Franklin, but by 1886 the name in charge was a more familiar one — John Sainsbury.[2] Mr Sainsbury seems to have been uninterested in postal services; when he took over at number 17, the London Road post office moved a few doors down to Frederick William Peck’s chemist shop at number 27.[3]

This was one of three shops run by Mr Sainsbury on London Road in the 1880s and 1890s: his flagship store at number 11, a poulterer here at number 17, and a pork butcher at number 35. In the late 1890s, he expanded from number 11 into number 9, switched number 35 from a pork butchers to a dairy, and moved out of number 17 altogether.[4]

W J Radlett’s bookshop, from page 2 of the 3 November 1908 Surrey Evening Echo (British Library hard copies). The actual subject of the photo as specified in the caption was a “Motor, with two front wheels knocked off in collision, being towed along a Croydon street”. 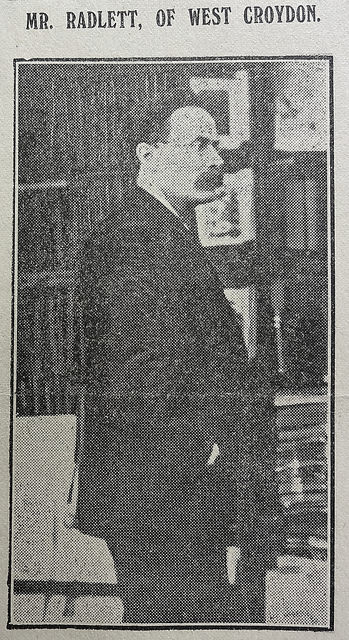 Walter Radlett on page 2 of the 13 January 1909 Surrey Evening Echo. Note the bookshelves in the background.

Next to arrive at 17 London Road was Walter J Radlett. Ward’s street directories list him from 1898 onwards, initially simply as a bookseller, and from 1923 as an antiquarian bookseller. This could indicate a change in the business, or could just be a desire for greater specificity on the part of the directory-maker. Walter spent around three decades here, lasting until the late 1920s.[5]

The premises then returned to their previous use as a food shop — this time as a fishmonger.

Mac Fisheries was a chain of fishmongers established around 1920 by William Hesketh Lever (otherwise known as Lord Leverhulme), one of the founders of Lever Brothers, which later became Unilever. Born in 1851, he began as a grocer working in the family business, then moved into soap manufacture and made a great deal of money.

By the time he reached his sixties he was rich enough to buy “the greater part of the Islands of Lewis and Harris in the Outer Hebrides”, likely intended as an estate to which he could retire. His desire to consolidate and expand the market for the products of the Hebridean fisheries led to his purchase of the retail fish shops that were to become the Mac Fisheries chain. Beginning his purchases in February 1919, by the end of 1921 he had 360 of them.[6]

The first Croydon branch of Mac Fisheries opened at 17 London Road around 1932, and was swiftly followed by others; two years later there were also branches on Church Street, South End, and George Street.[7] There’s a description of the South End branch in the Croydon Oral History Society publication Talking of Croydon: Shops and Shopping 1920–1992.[8] Croydon resident Dorothy says that the shop: “had a grand display with a big fish and all the different coloured varieties such as shrimps, prawns, plaice, kippers, bloaters laid out in a wonderful show on the marble slabs. Our favourite Saturday tea was shrimps and winkles.”

The London Road Mac Fisheries lasted until at least the mid-1950s, but I’ve not been able to find much firm evidence of when it finally closed. The latest explicit mention of it I’ve seen is in Kent’s 1956 directory. A planning application from July 1960 includes a simple line diagram of the frontage, with the name “Mac Fisheries”. However, this seems to be the only surviving part of the application, so it isn’t clear whether the fishmongers were still in residence at this point. The application was for “shopfront & alts”, and it was granted, but there’s no information on whether this was a refurbishment of the existing shop or whether the Mac Fisheries diagram was simply an indication of the current frontage and the proposed alterations were for a completely new business.[9]

By the mid-1960s, the premises had definitely moved away from food. A planning application from early 1964[10] shows signage for “Granada TV Rental” in an artist’s impression of “suggested shopfront and fittings [...] for Messrs Red Arrow Services Ltd”.[11] The plans include “silver anodised frames and doors”, “formica plasters and returns [in?] dove grey soft glow” and a “terazzo forecourt laid in alternate strips 12″ wide, with ebonite dividings”. The application was granted on 4 May 1964, and Granada TV Rentals is listed at 17 London Road in street directories for 1967, 1968, and 1969. By 1971, however, it had moved to the High Street.[12]

There’s evidence of a brief occupancy by a takeaway called Golden Bake ‘N Take at some point in the early 1970s. A planning application submitted in January 1973[13] states that the prior use as “Bake-N-Take (take away cooked foods)” had ended around six months previously. The application includes a photograph showing that the signage actually read “Golden Bake ‘N Take”.

This application, which was granted in June 1973, was for a change of use “from shop to restaurant”. It seems clear that the plan was to have a fair amount of eat-in custom, as the plans include “improving fumes, ventilation & installing 2 L.B.’s [lavatory basins, i.e. sinks] & 2 W.C.’s [water closets, i.e. toilets]”. It may even have been eat-in only; another application from May 1978[14] is for “alterations to shop front and provision of takeaway hot food facilities”.

The Croydon Kebab Centre first appears in the April 1994 Goad plan, and its name has remained unchanged ever since. Its primary business today is takeaway, though there’s a small space for eat-in, containing a few green plastic bucket seats firmly attached to their corresponding tables.

The current owner is Alparslan Targan, who began working at the shop in 2000 and bought the business 5 years later, when the previous owner decided to sell. He’s still to be found behind the counter, taking orders, cooking burgers, and assembling kebabs. In late 2012, he introduced freshly-baked flatbreads and Turkish patties to the menu, cooked throughout the day by a cheerful lady who tends a hot metal griddle in the corner of the shop by the window. He tells me this was due to a shift in the demographics of his customers over the years, and a corresponding increase in demand for these freshly-baked items. It’s certainly a development that pleases me!

Vegetarian burger with cheese and egg, from the Croydon Kebab Centre, April 2013. Extra portion of salad in the background. Photo: author’s own.

Thanks to: Alparslan Targan at the Croydon Kebab Centre; Josette Reeves at the Unilever Archives; Brian Gittings; Alex Zambelli (who solved the “L.B.’s” conundrum); the Planning Technical Support Team at Croydon Council; all at the Croydon Local Studies Library; and my beta-readers Flash and Kat. 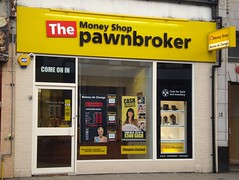 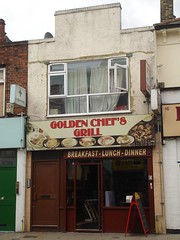 18 London Road: Golden Chef’s Grill »
18 London Road is the home of the Golden Chef’s Grill, a traditional British cafe open throughout the day. The building was definitely constructed before 1868, as it’s shown on the Town Plans surveyed in that year. The first inhabitant was probably George Robinson, railway carpenter’s foreman, in the early 1860s.