Why I haven’t published any articles in 2018

Regular readers will have noticed that I haven’t published any articles since November 2017. There’s a reason for this, which I’ll explain below, but first I’d like to apologise for not having explained previously.

The thing is that every time I felt able to sit down and write about this, there was the possibility of more conclusive news just over the horizon, so I decided to postpone it until then — and every time, the news turned out not to be so conclusive after all. There does, however, finally seem to be a light at the end of the tunnel.

Warning: mention of medical symptoms below — nothing graphic or disgusting, but potentially triggering to people who’re affected by descriptions of respiratory distress.

The rebuilding of Royal Mansions, June 2018.

Just over three years ago, I noticed there was something wrong with my ability to walk long distances. I got worn out very quickly, and I couldn’t get enough breath. I thought at first that perhaps I’d been working too hard and not taking enough exercise, so I gave myself a couple of weeks off work in order to focus on improving my fitness. It didn’t make any difference at all.

So eventually I went to my GP practice to ask for advice. At the time, this was a large practice with so many GPs and such a high turnover that you never got to see the same GP twice, which made continuity of care a bit tricky. Some of the GPs I saw were helpful; others were hostile and dismissive. Some of them sent me for tests; others told me to go away and stop making a fuss.

The rebuilding of Royal Mansions, September 2017.

After a year of back-and-forth, during which they diagnosed me with asthma and prescribed me an inhaler, then changed their minds and told me to stop taking the inhaler, I finally persuaded them to refer me to the specialist chest clinic at Croydon University Hospital, who told me that I almost certainly do have asthma — apparently it’s not at all uncommon for this to develop or recur in one’s 40s, so I’m right on schedule.

I thought that’d be the end of it — that they’d prescribe me medication which would sort it all out and I’d be back to normal. After all, there are loads of asthmatic athletes. Paula Radcliffe has asthma, and she runs marathons!

But no. The initial medication they gave me turned out not to be enough, so they added more. Then I caught a chest infection which refused to go away. I’d stopped wheezing, but now I was coughing to the point of nausea several times a day, and I still struggled to walk to the end of the street. This meant antibiotics — not only a short course to clear up what was already in there, but six months at a lower dose as maintenance therapy.

Throughout all this, the Croydon University Hospital specialists made sure I knew they weren’t going to give up on me. They assured me that they would keep trying, and that they would find a way to fix me.

The rebuilding of Royal Mansions, May 2016.

Three years after first realising something wasn’t right, two years after first reporting it to a GP, and a year after seeing my first chest clinic specialist, I’m now taking three types of tablet and two types of inhaler, as well as having a “rescue” inhaler for when my symptoms are worse than usual.

I’m not fixed yet — I have to rest two or three times on the way from my house to the station, which used to be a three-minute walk — but I’m no longer confined to the sofa and I’m no longer kept awake at night by my symptoms. Sometimes I can even forget there was ever anything wrong.

The rebuilt end of Royal Mansions, May 2017.

So what does this mean for The Past and Present of Croydon’s London Road?

I stopped publishing at the end of last year because my symptoms were not only making me incredibly miserable but also making everything very difficult and time-consuming. I couldn’t just pop up the road to take photos. I couldn’t spend hours in the British Library looking through old newspapers. I couldn’t concentrate; I couldn’t think. Now I can do those things again. I’ve been out photographing the new businesses that opened on London Road while I was ill; I’ve been to the British Library twice in the past few months; and I’m excited at the idea of fitting a regular writing day back into my schedule.

I’m taking things slowly but surely, so I hope to publish my next article in January 2019. Thank you all for being patient during this hiatus — and special thanks to those who got in touch to ask if I was OK. I am OK, and thanks to the lovely people at Croydon University Hospital, I finally believe that I will keep on being OK. 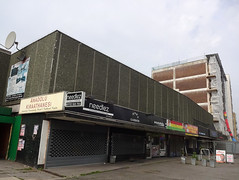 « 171–183 London Road: A block of small businesses
The long, low concrete block to the north of Zodiac Court was originally intended to house seven individual shops. However, its two longest-lasting occupants were Midland Bank and The Cartoon live music venue, both of which occupied three shop units apiece. Other notable occupants over the years have included Moss Bros menswear, a 1980s “hand held computer” outlet, and an Anatolian community centre. 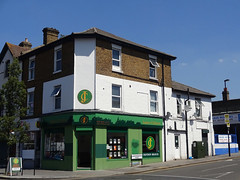 182–184 London Road: James Chiltern and RB Minicabs (part 1) »
Although currently occupied by separate businesses — James Chiltern estate agents and RB Minicabs — 182 and 184 London Road were once a single property, built in the mid-1860s as the Duke of Cornwall tavern. Here I discuss their history up to the point where they were split, including the reason for the Duke of Cornwall’s demise.