As mentioned in the first part of this mini-series, the office block at 185 London Road — Vistec House — was built in the 1960s following the demolition of a semi-detached pair of houses then numbered as 185 and 187 London Road.[1] In that article, I covered the history of number 185 from when it was first constructed to the departure of its last residential occupiers in the 1940s. Here I do the same for number 187; although, as will be seen, it fell out of residential use at least half a decade before its neighbour.

The semi-detached pair of houses comprising 185–187 London Road was built in the 1840s on land that had previously been part of the Broad Green House estate, as described in my previous article. It’s unclear who the first occupant was, but it may have been August, Augusta, or Augustus de Wilde — although that person may in fact have lived next door at number 185. Other likely early occupiers were Lieutenant Cook and Louis le Paige, but I’ve not been able to find out anything about them other than their names.[2]

Twenty-something merchant Walter Robert Johnson and his wife Mary Jane arrived as newlyweds in the spring of 1849, and their son Alfred Walter was born in the autumn of the following year. Also in 1850, Walter became a member of Lloyd’s of London. He was a Lloyd’s “Name”, meaning that he could use his own personal wealth to insure risks brought to the Lloyd’s market. The family remained here only a short time, however, and were gone by mid-1854.[3]

Next to arrive was John Whiffin, in place by May 1854 and remaining for around a decade. John was away from home on the night of the 1861 census, leaving only his servants Mary Turner and Susan Judge at his London Road house, and so I’ve been unable to find out anything more about him.[4]

John’s replacements stayed for a much briefer period. William Manoah Chambers and his wife Mary moved here from Windmill Road in mid-1864, but moved again shortly afterwards to a house further up the road on a plot now occupied by Croydon University Hospital. William died there on 23 May 1865.[5]

William and Mary Chambers’ previous home at 14 Windmill Road (then numbered as 2 Norfolk Villas), June 2019.[6] The original features seem to have been preserved to a rather greater extent than in the other half of this semi-detached pair, to the right. Photo: author’s own.

A Mrs Sherriff was in residence by November 1865, but gone again by late 1869, replaced by widow Anne Nichols and her companion Gertrude Hainworth. Anne remained here until around 1874, before moving to Bradford-on-Avon where she died on 15 December 1875.[7]

The details of the relationship between Anne and Gertrude are unclear. The 1871 census lists Gertrude’s relationship to Anne as “Servant”, with a job title of “Companion”, but Gertrude seems not to have made a career out of being a paid companion, nor does she seem to have been in financial need. In the absence of personal documents, it is of course impossible to prove whether Anne and Gertrude were actually in a romantic relationship — but they certainly might have been.[8]

The final occupant during the 1870s was Vade Thomas Kesterton, a solicitor who worked as managing clerk for Drummonds, Robinson, and Till of North End.[9]

One has to wonder how well Vade was able to execute his duties, given that he appears to have been rather gullible in his personal life. In July 1877, he was defendant in a case brought by a moneylender who claimed Vade owed him £109 (£12,482 in 2018 prices). This moneylender, Mr Martin, had paid out on two bills Vade had signed to cover gambling losses, and now sought to recover his money.

Although the jury found that Mr Martin was at fault, since he either knew or should have known that the bills “had been obtained from Mr. Kesterton in satisfaction of a gambling transaction, which was illegal, and not recoverable by law”, Vade did not go unchastised. Reports of the case describe him as losing hundreds of pounds on repeated occasions to John Tucker, Aaron Holledge, and several other people, mainly at billiards but also at cards. Summing up, the judge stated that:[10]

“The defendant appeared to have been as blind and as foolish a dupe as two sharpers could get hold of and victimise, and the way in which he allowed them to go on, time after time, winning money from him, which he lost with great complacency, must have caused these two worthies when left to themselves, to grin at each other with feelings of lively satisfaction.”

Vade did not remain long on London Road after this — in fact, it seems likely that he made good on his claim to Mr Martin that if his money troubles continued he “should have to go abroad”. On 27 December 1878, the steamship Garonne departed from London for Australia, and on its arrival in Sydney in February of the following year a Mr V Kesterton was recorded among the passengers.[11]

Garonne c.1900. Photograph by F C Gould, from the Ship Collection at the State Library of South Australia (ref B 7902). Used under Public Domain Mark 1.0.

If this was indeed our Vade, he appears to have got into as much trouble overseas as he did in Croydon. Sue, a family historian who uses Ancestry under the name of gsdsd1, has gathered several records relating to a solicitor in Australia with the name of Vade Thomas Kesterton, showing that he remarried in Australia despite having a still-living wife in England, was twice struck off the rolls as a solicitor there, and died on 26 July 1909 in Parkside Asylum, Adelaide, of cardiac disease and “senile decay”.[12]

Civil engineer Charles Woodley Whitaker and his wife Celia were next to arrive. Charles was born in Exeter in 1837, second son of the Devonshire county surveyor. He trained with his father, and was employed by the Metropolitan Board of Works under Joseph Bazalgette. Branching out to work on his own account, he designed and oversaw projects including two bridges over the River Wye, the drainage and sewage systems of several towns, and the sea wall and promenade at Clacton-on-Sea.[13]

Charles and Celia were living at 187 London Road by April 1881, along with their four children, but remained only a short while. By the end of 1883 the family had moved to a newly-built house on Elmwood Road, a side road off London Road a short distance to the north. They gave their new home the name of Woodleigh, presumably to reflect Charles’ rather unusual middle name. Charles unfortunately had very little time to enjoy it, as he died there on 31 July 1884 after “a short but very painful illness”, aged only 47.[14]

Charles Woodley Whitaker’s death announcement on page 107 of the 8 August 1884 The Engineer. Note that “ult.” means “of last month”.

Number 187 was not immediately reoccupied after the departure of the Whitakers, but by the start of 1885 it was home to Richard Kettle Barnes. Despite sharing a surname with his neighbour Thomas Henry Barnes at number 185, there appears not to have been any family connection between them.

Richard was aged around 70 at the time — a quarter of a century older than Thomas — and although earlier in life he had worked as a surgeon like Thomas, he appears to have left this profession quite some time before arriving on London Road. Indeed, his last appearance in the Medical Directory was in the 1847 edition, published just a couple of months before he applied for a final insolvency order at the London Court of Bankruptcy. He remained only a short while, and was gone again by 1888.[15]

Richard Kettle Barnes’ entry in the 1847 Medical Directory, courtesy of the Wellcome Collection.

The final two households to use 187 London Road solely as a private residence were headed by men with very similar names. Edward White was in place by 1889 but gone again by 1892, replaced by Edward Whitbourn and his wife Laura. One might wonder whether this was in fact the same man, with the difference in surname being explained by a later-corrected error in his listing in Ward’s directories. However, it does appear to be simply a coincidence, as the 1891 census shows Edward and Laura living in Dorking.

Edward was in his early 60s when he and Laura arrived on London Road, and seemingly quite well off, being listed in the census as “Living on [his] own means”. The Whitbourns continued to live here until Edward’s death on 19 February 1907. Laura left London Road soon after, and by 1911 was living at Warblington in Hampshire.[16]

By November 1907, a new chapter in the life of number 187 had begun with the arrival of the United Violin College, offering a “patent method” of violin teaching which could “entirely overcome” any “technical difficulties”. Despite advertising “High Class Tuition by fully qualified Professors”, the main purpose of the business in fact seems to have been the sale of violins “for a small deposit and weekly instalments”. Its head office was at Clapham, with branches in East Dulwich, Hammersmith, Highgate, Kilburn, Leeds, Malden, Manor Park, Tooting, Southampton, Swindon, Walthamstow, and Wimbledon.[17]

Advertisement for a new branch of the United Violin College at 107 London Road (later renumbered to 187), from page 4 of the 9 November 1907 Croydon Chronicle. Image © The British Library Board. All Rights Reserved. Reproduced with kind permission of The British Newspaper Archive.

This seems quite a heavy repayment schedule, and indeed by March 1911 Alfred’s finances were in a poor enough state for him to be pulled up in front of the London Bankruptcy Court with a deficiency of £1,124 16s (£130,000 in 2018 prices) between assets and liabilities. Alfred attributed his failure to “loss in carrying on the business”, a lack of capital, and the burden of repaying the purchase price he had agreed to.[18]

Regardless of Alfred Muehlmann’s money woes, by 1911 the United Violin College had been replaced at 187 London Road by 50-something William Nicholas Kirkland, a “ladies’ and gent’s tailor” who continued to trade here until the mid-1920s. William lived on the premises with his wife Beatrice Sarah, nine of their twelve children, his son-in-law Ormonde Hough (husband of his daughter Beatrice Eva), and his granddaughter Beatrice Emily.

At the time of the 1911 census, three of William’s daughters were also employed in the clothing trade: 18-year-old Daisy and 17-year-old Victoria as drapers’ assistants, and 16-year-old Lily as a milliner, though William himself seems to have been the only one working “At Home”. Ormonde also worked outside the house, as a carpenter and joiner employed by the County Borough of Croydon.[19]

Around 1924 William was replaced by another tailor, Arthur Gill. Arthur likely worked in collaboration with yet another tailor, Joseph Groutage; indeed, the business seems to have switched to trading under Joseph’s name by 1927. However, both Arthur and Joseph were gone by 1929.[20]

The final people to use 187 London Road primarily as a private residence were Isaac and Sarah Jane Croft, who lived here with their adult son Stanley Douglas Foster Croft. When the family arrived here around 1928, Isaac and Sarah were in their late 50s while Stanley was in his mid-30s. They may have taken in lodgers, as electoral registers record several additional people at the premises with different surnames, possibly including married couples.[21]

In any case, the Crofts and all their co-inhabitants were gone by 1934, replaced by Marvin Hart and his shopfitting and joinery firm. The rest of the story, including the demolition of numbers 185–187 and their replacement with Vistec House, will be told in my next article. 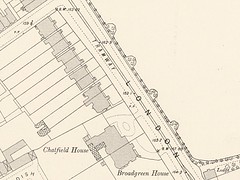 « 185 London Road: Vistec House (part 1)
Vistec House at 185 London Road was built in the 1960s on the site of what was once a semi-detached pair of houses. In this article I describe the construction of these houses and the occupants of the southernmost one up until the point when its last residential users departed. 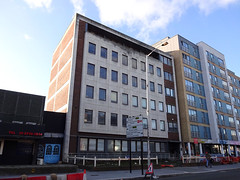 185 London Road: Vistec House (part 3) »
Built in the 1960s as offices for the Viscose Development Company, Vistec House fell vacant after the first decade of the 21st century. It’s now being converted into flats, with a new extension behind for a 90-room “Super HMO”.