Vistec House at 185 London Road, currently being converted into flats, was originally built as an office block. Its construction in the 1960s required the demolition of a pair of semi-detached houses which had stood there since the 1840s.

Born in Bow at the turn of the century, Marvin Hart became a professional boxer as a teenager and continued in this career for around a decade.[1] An article in The Times describes one of his fights, at the National Sporting Club in Covent Garden on 5 October 1925:[2]

“The best fight of the evening, however, was between Marvin Hart, of Croydon, and Gunner J. Stephens, of the Royal Artillery. The former [...] is an aggressive and hard-hitting middle-weight [...who] had broken a couple of Stephens’s ribs when the two last met. [...] Hart, the shorter but stronger man, rushed and swung his blows with almost melodramatic fury, but himself twice had to take counts and twice, in addition, overbalanced himself and fell rather hurtfully onto the boards. [...] it was a severe but most sportsmanlike encounter, and Hart’s cheery acceptance of the decision against him was quite as pleasant in its way as Stephens’s pluck and steadiness under fire.” 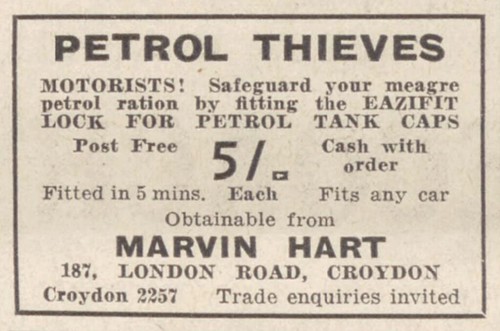 Advertisement for Marvin Hart’s petrol tank lock, from page 10 of the 13 October 1939 Croydon Advertiser. Image © Trinity Mirror, created courtesy of The British Library Board and reproduced with kind permission of The British Newspaper Archive.

After retiring from boxing, Marvin turned to shopfitting. Marvin Hart Ltd was formed in January 1933, with Marvin as sole director, and had premises at 187 London Road by the end of the year. By early 1937 Marvin was also operating a colour printing company, Hart Press, from the same address.

Things did not go entirely smoothly; Marvin Hart Ltd was forced into liquidation, as was another company, Paramount Shopfitting & Construction, which had been formed to take over the first company.[3] Marvin himself was brought up before Croydon Bankruptcy Court in December 1940, as reported in the West Sussex Gazette:[4]

“His debts were £3,240 [£178,000 in 2018 prices] and assets nil. Debtor said that on retiring from the ring he became a shop-fitter, and later formed companies, on whose behalf he became an unlimited guarantor to a trust company for discounted bills of customers. Then he interested himself in a printing business, and afterwards opened shops at Ewell, Banstead, Selsdon, and Cliftonville, where the sale of flowers was combined with libraries. ‘I read and digested a book on how to run twopenny libraries,’ said debtor, ‘and thought it a splendid opportunity of becoming a millionaire, but lost money every week.’

“He patented a motor petrol tank lock, hoping to make money, but garages would not buy it. He went into a scrap-metal and motor-breaking business, but it lasted only a month. His speculations he admitted were very unfortunate, but would not agree with the Official Receiver that they were wild.”

Marvin was not put off by any of this. He continued to work as a shopfitter under his own name, and Hart Press continued in business too. By October 1946 he had expanded from 187 London Road to number 185 next door, hence occupying both halves of this century-old semi-detached pair.[5]

1950s: The threat of demolition

By the late 1950s, plans were being made to demolish 185 and 187 London Road and replace them with a new car showroom and offices for the Smith Auto Company, which at the time was located just down the road at number 145. Number 145 itself was built at around the same time as numbers 185–187, though unlike the latter had been extended substantially in the years since.

The Smith Auto Company’s planning application for “demolition of the existing building and the erection of motor showrooms and offices” was granted on 16 December 1957, but for some reason these plans were not put into place. Smith Autos remained at 145 London Road, and numbers 185–187 remained intact.[6] 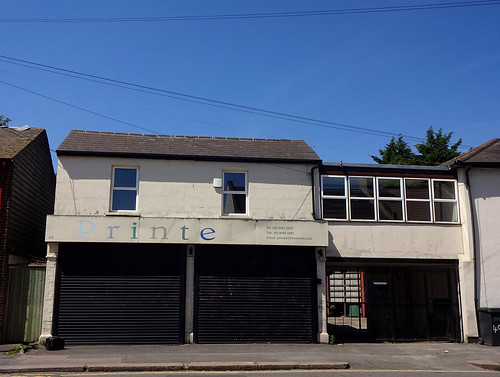 Although Marvin Hart seems to have given up the shopfitting business around the start of the 1960s — unsurprisingly, since he was in his own 60s at this point — Hart Press continued to operate from 185–187 London Road until 1963. However, the end of these buildings was now finally in sight.

On 18 May 1962, Croydon Council received a planning application for “[d]emolition of existing buildings and erection of office block with storage, garage accommodation and [caretaker’s] flat”. The application was granted, and by June 1964 Hart Press had moved to 43 Cross Road in East Croydon and the old semi-detached pair of houses had been replaced by a new office block: Vistec House.[7]

The impetus behind this project came from the Viscose Development Company, which had its roots in a pioneering technique created several decades earlier. Three industrial chemists — Charles Frederick Cross, Edward J Bevan, and Clayton Beadle — were working at the Jodrell Laboratories at Kew in the early 1890s when they discovered a way to extract soluble cellulose from cotton and wood. After patenting their invention in 1892, Charles and Edward set up a number of companies aimed at exploiting the practical uses of the process.[8] 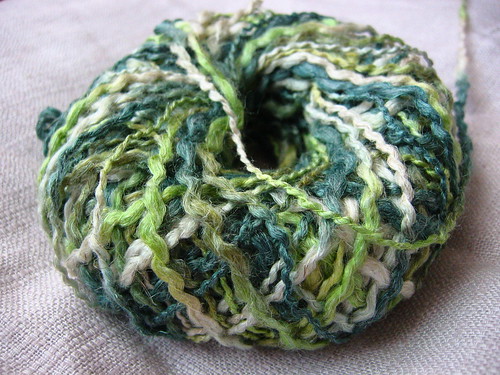 One of these companies was the Viscose Spinning Syndicate, founded by Charles in partnership with yet another chemist, Charles Henry Stearn, who had developed a way of producing flexible fibres from the “viscous cellulose solution” — viscose — created by Charles’ extraction process.

Although the initial motivation for producing these fibres was for use in electric lamp filaments, they were soon adopted by the textiles industry, with viscose silk companies being formed in “most of the European countries” by the end of 1905. Viscose is still widely used in textiles of all kinds today.[9]

The Viscose Development Company followed a different path. Founded in 1902 as a merger of the Viscose Syndicate and the British Viscoid Company (both of which had been set up in the 1890s by Charles and Edward), it focused on non-fibre applications of viscose such as moulded materials and cellulose sponges. As technology developed, the company branched out into working with newer materials such as polythene and fibreglass.[10]

By the time it arrived on London Road, the Viscose Development Company already had a history of building its own premises, including “a new factory, with a floor area of 77,700 square feet” on “the foreshore near the South Dock, Swansea” in the late 1940s/early 1950s. Given that the Swansea factory, which employed around 350 workers, needed to discharge around “100,000 gallons of process water per day [...] into the sea”, it seems clear that no manufacturing was likely to take place at the new Croydon premises.[11] 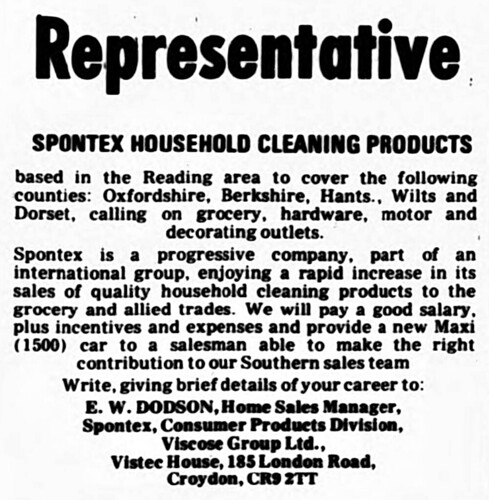 Advertisement for a sales representative for Spontex, part of the Viscose Group, at Vistec House, taken from page 4 of the 10 November 1973 Reading Evening Post. Image © Trinity Mirror, created courtesy of The British Library Board and reproduced with kind permission of The British Newspaper Archive.

The Viscose Development Company remained at Vistec House until the mid-1980s, joined along the way by associated companies Sponcel Ltd, which made sponges and sponge cloths; Viskase Ltd, which specialised in food casings such as sausage skins; the Viscose Group; and Viskraft Signs.

Viskase Ltd seems to have remained here the longest of these, but in any case all had departed by 1988.[12]

Among the last companies to use Vistec House as office premises were Bullen Consultants Ltd and their sister company Bullen & Partners. Previously located across the road at numbers 188–190, Bullen opened a second office at Vistec House around 1990. They departed their other premises by the middle of the decade, but remained at Vistec House until around 2005–2006.[13]

Shortly before Bullen left London Road, they were joined by Berkeley Solicitors, run by Manndred Ifeanyichukwu Adophy and John Eni-Uwubame. Based on the third floor of Vistec House, the firm offered a wide range of legal services: conveyancing; family and matrimonial; immigration; civil and commercial litigation and dispute resolution; wills, trust, and probate; criminal law; and corporate and commercial law.[14]

By March 2006, Berkeley Solicitors were advertising for “a Lawyer to work as a Chinese law consultant in our firm”, requiring candidates who were “qualified to practice as a Lawyer in China PRC”, with “a working knowledge of English and Mandarin”, and at least “2 years’ experience working in the UK”.[15] It seems they should also have specified a willingness to stay within the law, as a couple of years later their “consultant” Mr Lu was caught out by a Radio 5 Live investigation of immigration advisors.

Posing as a Chinese applicant for the newly-introduced highly-skilled migrant visa, the radio’s undercover reporter was advised by Mr Lu to “start up a consultancy company [...] pay in some money [...] and take some of the money out and there’ll be a cash flow”. This company could then be used to fake “extra income” to meet the necessary salary to qualify for the visa. The charge for all this would be “£1,500, as well as extra accountants’ fees to fake tax returns”. Although Mr Lu “later told the programme there had been a misunderstanding and he would never have advised the journalist to do anything illegal”, Berkeley Solicitors suspended him pending an investigation.[16]

Berkeley Solicitors remained at Vistec House only a short while; by November 2008, bankruptcy petitions had been filed against both partners, and by January 2010 both had been declared insolvent.[17]

The entrance to Vistec House, May 2014. Note the plaque to the right reading “Vistec House 185”. Photo: author’s own.

By the end of 2014, Vistec House had been vacant for around five years, and as with many other vacant office buildings in Croydon there was a general feeling that it could be better put to use as housing for the Borough’s growing population. Initial plans were to demolish it entirely and construct two new buildings with a communal garden in between, commercial space on the ground floor, and 55 flats above with 1–3 bedrooms each. Although Croydon Council were amenable to this, by mid-2015 the intention had changed: Vistec House would remain intact, but be converted to provide a total of 62 flats.[18]

Further amendments followed; a new planning application was lodged in July 2016 increasing the number of flats to 95, and another later the same year sought permission to build an additional “roof extension and nine storey rear extension to provide [...] one House in Multiple Occupation (‘Super’ HMO) totalling 90 letting rooms”. Both applications were granted, and by Autumn 2017 work was well under way.[19]

Construction work at the rear of Vistec House, seen from Cavendish Road, September 2017. Vistec House is the white and dark brown building on the right hand side; to its left is Gary Court in light brown and grey. Photo: author’s own.

Despite this promising start, by mid-2018 the conversion of Vistec House had essentially come to a halt, with “a number of commercial reasons” preventing further progress. As of July 2019, only eight “residential units” are “complete and in an occupiable condition”, and work is projected to continue until at least early 2021.[20]

Vistec House, 185 London Road, March 2019. Vistec House is the central building, covered in scaffolding as it undergoes conversion to flats. The lower building to the left, partially blocked off in front by hoardings, is the end of 171–183 London Road, and the taller building to the right with a light blue, white, and light brown facade is Gary Court. Photo: author’s own. 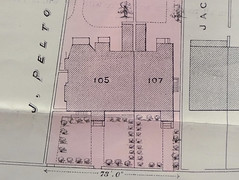 « 185 London Road: Vistec House (part 2)
Vistec House at 185 London Road was built in the 1960s following demolition of a semi-detached pair of houses. I previously described the construction of these houses and events at the southernmost one until its last residential users departed; here, I cover the history of its neighbour up to the same point. 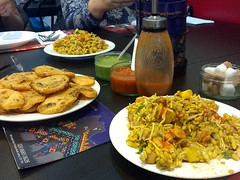 Postponement of November 2019 article »
I’m waiting for a will to be delivered, and so I’m postponing my next article until that arrives, since I think the information in it is likely to be quite important. In the meantime, here’s a report on a food walk that a friend and I led along London Road last month.