Warning: photo below that at least two people with vertigo have found problematic due to the lines of the building.

As described in my previous article, 190 London Road was built around 1869–1870 as a shop with living accommodation consisting of five bedrooms, a parlour, and a kitchen. It had two workshops behind the main premises; a “large brick built and slated” one butting directly on to the house, and another comprising an outbuilding at the end of its garden.[1]

In comparison to the initially somewhat volatile situation at number 188, number 190 — then known as 4 Kidderminster Terrace — had a slower but more stable start to life. The first documented occupant was G H Rolls, a printer and bookbinder who boasted of being able to bind musical scores “to open perfectly Flat”. In place by early 1874, G H Rolls remained until around the end of the decade.[2] 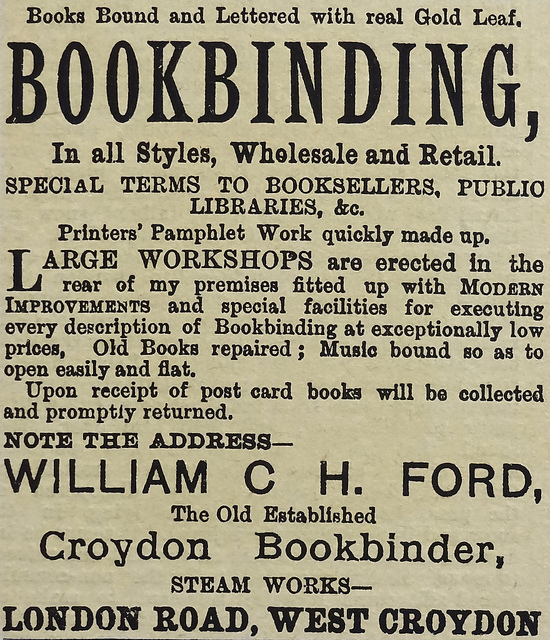 Advertisement for William Ford’s bookbinding business in the 7 January 1893 Croydon Guardian, found as a clipping in the firms files at the Museum of Croydon.

G H Rolls’ replacement was even more long-lasting. William Charles Huxtable Ford took over the printing and bookbinding business by Spring 1880, and remained until just past the turn of the century.[3]

William pitched his firm as one that was both long-established and bang up to date, advertising his “steam works” as having “large workshops [...] fitted up with modern improvements” but taking care to describe the business as “The Old Established Croydon Bookbinder”.[4]

After leaving London Road, William moved around the corner to a newly-built house at 41 Kidderminster Road. He may have left the business due to poor health, as he died on 11 October 1905 at the age of just 53.[5] 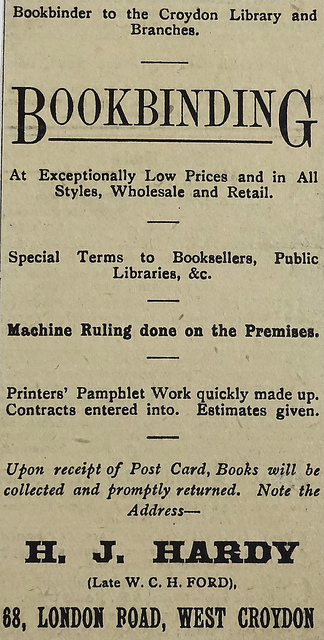 Advertisement for H J Hardy in the 22 October 1904 Norwood Weekly Herald, found as a clipping in the firms files at the Museum of Croydon.

The next occupant of 190 London Road was also a bookbinder, and the longest-lasting of them all. Indeed, it seems possible that Herbert James Hardy had previously been employed by William, and took over the business from him. In any case, by the beginning of 1902 Herbert was in charge of the business now known as H J Hardy.[6]

At some point during the tenure of H J Hardy, the workshop at the back of the property was extended further backwards, leaving just a narrow passage between it and the additional workshop which had originally been at the end of number 190’s garden.[7]

The business was converted to a limited company during the 1950s, and remained at 190 London Road until the early 1970s. It then moved to 115 Southbridge Road and again to 19 Imperial Way, where it remained until the late 1980s.[8]

It’s unclear how long Herbert himself was involved with the business — certainly not for its entire time on London Road, since he was born in 1873 and is unlikely to have still been working at the age of 100. He was certainly still alive and living on Briar Road, Norbury, in August 1942, when he was granted probate on his wife Annie’s estate, but after this he vanishes from the documentary record.[9]

The amalgamation of 188 and 190 London Road into the double-width property of today seems to have taken place shortly after the departure of A & P Stallion from number 188 and H J Hardy Ltd from number 190. This may have initially been an informal arrangement, as the index cards for the property at Croydon Council’s planning department have no record of an application for internal alterations.

Nevertheless, by mid-1974 at least one of the properties was occupied by chartered accountants Boty Cox Crawford & Ridley, and by the end of the year the company was claiming 188–192 London Road as its address and applying for planning permission to demolish the workshop behind its premises and replace it with a two-storey office building.[10]

By the start of 1976, Boty Cox Crawford & Ridley had been either replaced by or absorbed into Edward Moore & Sons, a national firm of accountants which was originally founded on Leadenhall Street in 1866 and expanded throughout England and Scotland in the 1970s.[11] Edward Moore & Sons also seems to have been interested in expansion in a more local sense, as in late 1979 it applied for planning permission to build additional offices at the side of its London Road premises.[12] Although permission was granted, this proposal was never actually put into action, and by early 1981 the firm had left London Road and moved a short distance away to Bedford Park.[13] 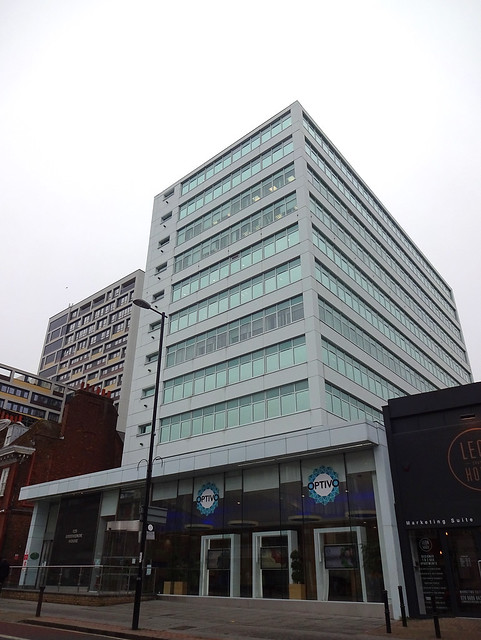 Next to arrive at 188–190 London Road was a firm of consulting engineers known as Bullen & Partners. Previously based at Grosvenor House on Croydon High Street, the firm arrived on London Road by May 1983 and remained until at least late 1988. At some point Bullen & Partners also opened an office at Vistec House a little further up the road, and they kept this on after leaving numbers 188–190, remaining there until around 2005–2006.[14]

By the mid-1990s Bullen & Partners had been replaced at 188–190 London Road by another firm of consulting engineers, Austen Associates, which moved here from 45 Coombe Road in South Croydon after the retirement of managing director Reg Austen. With the lease at Coombe Road coming to an end, the remaining partners decided to buy a freehold property and settled on London Road.[15]

In line with Reg Austen’s previous employment with the South East Thames Regional Health Authority, Austen Associates specialised in healthcare projects, including work for the NHS. The company took on projects of all sizes, with a focus on the design of building services such as heating, ventilation, air conditioning, water, gas, medical gases, power, lighting, and fire alarms.

During the years after the move to London Road, changes in the market and the expansion of the private finance initiative for NHS projects led to a substantial decrease in the company’s main source of work, and redundancies and resignations soon followed. By the end of 2001 Austen Associates had left London Road and moved to Edenbridge, Kent.[16]

Next to arrive at 188–190 London Road was Lobo Seafood, a chain of fishmongers with several other branches around London and Birmingham.[17] Originally founded in 1990 as an importer and wholesaler of frozen fish based in Billingsgate Market, in 1997 the company expanded into retail with the opening of a fishmonger’s shop in Peckham, and it later also opened a number of butchers’ shops.[18]

The London Road branch opened in 2002 and remains there today, selling frozen fish and seafood including tilapia, kingfish, red snapper, shark, croaker, hake, herring, sprats, squid, prawns, and mussels. It also sells a small selection of West African groceries such as palm oil and canned beans, as well as a few meats such as turkey wings and smoked chicken.[19]

Thanks to: Aloysius Lobo; Lee Thompson; the Planning Technical Support Team at Croydon Council; the staff, volunteers, and patrons at the Museum of Croydon; and my beta-readers Fred and Kat. Census data and non-Croydon phone books consulted via Ancestry.co.uk. 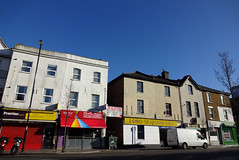 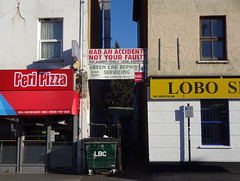 192–200 London Road: Behind Kidderminster Terrace »
Originally created in the 1870s as an area of gardens and outbuildings, the space behind 188–204 London Road was developed over the following century into a hive of light industry. Today it lies vacant and cluttered with debris.