36 London Road is currently home to two businesses: a hairdressers called Suave Living at ground level and a barbers called Precision Barbers in the basement.

1870s: Construction of the building, and the first occupant, Nathaniel Gifford

Numbers 28–42 London Road all look very similar architecturally, and indeed until the great renumbering of 1890 they were all addressed separately from the rest of London Road — initially as 1–8 Oakfield Terrace and then as 1–8 The Parade.[1] However, this terrace was actually constructed in two halves. Numbers 28–34 came first, and were in existence by 1872; by 1876, numbers 36–42 had been built to join them.[2]

The first occupant of number 36 was Nathaniel Gifford’s “general draper, upholsterer, and sewing machine agent” business. After starting up in the early 1870s with a single shopfront at number 32, by 1876 Nathaniel had expanded into numbers 34, 36, and 38 as well.[3]

By 1880, however, Nathaniel Gifford had left London Road. His replacement at number 36 was The Universal, a furniture shop which also advertised itself as the “Universal Bedding Company” and “Universal Furnishing Company”. This remained in place until around 1885.[4]

Advertisement for The Universal from Ward’s 1885 Croydon directory, courtesy of the Croydon Local Studies Library and Archives Service.

Following a brief period of vacancy — and a renumbering to 5 The Parade — the premises were next occupied by an oil and colour merchant named Hampden H Wotton. Some explanation of this profession may be of interest here, as it’s one which no longer exists today. As described in my article on 5 London Road, an oil and colour merchant sold oils for cooking, heating, and lighting, as well as paints — however, these paints were not ready-made, but rather mixed to order from linseed oil and ground pigments. According to Kelly’s 1889 street directory, Hampden Wotton also sold “paperhangings, [...] varnish & glass” and offered the services of a “paper stainer & lead light glazier”. Around 1893, he moved his business from London Road to Poplar Walk, and changed the name to Wotton & Son.[5]

None of the next few occupants of 36 London Road stayed more than a year or so at the address: John Lawrence, bootmaker, around 1894, A B Thisleton’s “ham & beef warehouse” around 1895, and finally a short-lived expansion of Hansmann & Moore’s hosiery and hattery business from number 38 next door, around 1896–97.[6]

In contrast to all this upheaval, the business that moved in during the final few years of the nineteenth century was to remain in place for nearly the whole of the twentieth. James Stewart Walker arrived on London Road as a young man in his mid-twenties, accompanied by his wife Agnes.[7] His hairdressing business was open by 1897, and by 1908 he was also offering chiropody services.[8]

After James Walker died in late 1935,[9] the hairdressing business was taken over by his son Sidney, who was in his early 30s at the time (and who had quite possibly been born in the residential part of the property).[10] The chiropody also seems to have been abandoned around this time.[11]

Sidney shared his father’s middle name, Stewart, and so the newly handed over business went under the name of S S Walker.[12] It kept this name for the next 50 years, until the late 1980s,[13] though Sidney Walker himself died in 1960[14].

As shown in the photo above, until S S Walker closed for good around 1987[15] the building was a fairly normal terraced one, little different from its neighbours. However, following the departure of the hairdressers, planning permission was sought to convert the basement into an independent shop, accessed via an external staircase from street level. The work also involved setting the ground floor back from the street and raising it a short distance.[16]

Despite this optimistic conversion, the final decade of the twentieth century appears to been something of a slump in the fortunes of 36 London Road. The building was briefly home to a video shop named Video Magic around 1990, but by mid-1992 it was vacant again.[17] There’s evidence of a “household goods” shop around 1994, but according to the Goad plan for that year, this also went under the name of Video Magic — a rather unlikely name for a homewares shop, so I suspect what actually happened was that the owner of the new shop never got around to changing the old name on the frontage.[18]

A furniture shop called Reflections (or possibly Reflection) appeared around 1997, but was gone again by 1998. Something called “Spiders Gaff” also appeared around this time; I’m not entirely sure what this was, but the first edition of Shop ‘Til You Drop (which was likely published around 1998–99) lists it under the Motor Cars section. In any case, by June 1998 the premises were once again vacant.[19]

At this point, something of a mystery emerges. According to Goad plans and phone books, there was a business called Suave Hair 2000 at 36 London Road by July 1999. However, the proprietor of Suave Living, the hairdressers which currently occupies the ground floor of the address, tells me that his business only moved there in about 2011; before that it was on Wellesley Road.[20] Coincidences do happen, though, and “Suave” is a reasonable enough name for anyone to pick as the name of a hairdressers![21]

The picture for the basement is clearer though; Goad plans from May 2002 onwards list “Precision Barbers m/hair under” at number 36 — i.e. in the basement — and a member of staff at Precision Barbers told me in April 2014 that it had been there for over 10 years, which fits together quite nicely.[22]

Regular readers of this series may be wondering why this article doesn’t conclude with a photo of goods or services bought from the current occupant(s) of the premises. The reason for this is that I couldn’t fit a haircut into my budget, due to my purchase from number 37 being somewhat more expensive than usual — more details next time!

Thanks to: Derrick Mullings at Suave Living; the staff at Precision Barbers; Brian Gittings; the Planning Technical Support Team at Croydon Council; all at the Croydon Local Studies Library; and my beta-reader bob. 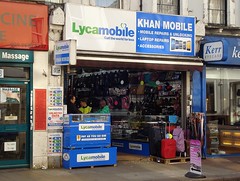 « 35 London Road: Khan Mobile, London Boyz Toyz, and Nadine Stylist
Built in the 1850s as a private residence, number 35 later became one of three shops that John James Sainsbury opened on London Road. For a while, it was also home to the Kerr family optician business that still continues today at number 37 next door. However, the current occupants are among the newest on London Road, having arrived around the start of March 2014. 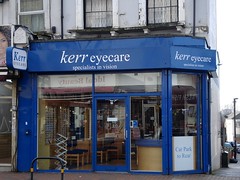 37 London Road: Kerr Eyecare »
Kerr Eyecare at 37 London Road is perhaps Croydon’s last surviving independent family optician, founded in the 1930s and on London Road since the 1950s. The building itself was originally a private home, but then saw nearly a century of alcohol retailing beginning with George Shirley’s independent wine business and ending with Victoria Wine.