35 London Road is currently home to no fewer than three businesses — a mobile phone repairs and accessories shop (Khan Mobile), a car styling and accessories shop (London Boyz Toyz) and a hairdresser (Nadine Stylist). Bags, baseball caps, wallets, and jewellery are also stocked on the premises. In the words of one of the staff members I spoke to in March 2014, shortly after it first opened, “It’s like a market!”

The building began its life between 1853 and 1855, as part of a small terrace which also included numbers 31, 33, and 37. In contrast to the purpose-built shops which later sprang up to fill in the gap between here and the Fox and Hounds, these four buildings were originally constructed as private residences.[1]

By 1858, number 35 was occupied by Arthur Simpson, listed in Gray & Warren’s 1859 directory simply as a “gentleman”.[2] A couple of years later he was replaced by Mrs Ann Potter, a widow in her late 50s. The 1861 census also lists Mrs Potter’s younger sister, an unmarried cook named Phillippa Downing, though as a census is a snapshot in time I can’t say whether Phillippa was a permanent resident or merely an overnight visitor. In any case, Ann Potter remained at 35 London Road until the end of the 1860s.[3]

Next to move in was a commercial clerk named George Waters, along with his wife Charlotte and possibly also their son Frederick. The Waters family were the last to use the premises solely as a private home, and were gone by 1874.[4]

Advertisement for Samuel Hawkins’ business in the Croydon Chronicle of 3 April 1875 (page 4). Image from microfilm courtesy of Croydon Local Studies and Archives Service.

The Waters’ replacement was a cheesemonger and butcher by the name of Samuel Hawkins, who previously traded in Brixton. The meat on offer included poultry, game, ox tongues, and “dairy fed pork”.[5]

Samuel Hawkins continued at 35 London Road until the end of the 1870s, and was then replaced in quick succession by B Weston, pork butcher; Thomas Bradley, cheesemonger and poulterer; and T J Weston, poulterer and provision merchant. By 1885, however, the turnover of businesses had stabilised with the arrival of a familiar name — John Sainsbury, pork butcher.[6]

Excerpt from Ward’s 1888 street directory, reproduced courtesy of the Croydon Local Studies Library and Archives Service. Note that 18 London Road was renumbered to 35 London Road in 1890.

This was the second of John James Sainsbury’s Croydon shops. The first, opened at 11 London Road a couple of years earlier, was a new model of grocery shop, with an extravagantly fitted-out interior aimed at attracting the more prosperous customers — and it was a huge success. With the new pork butcher’s shop, Sainsbury’s had the facilities to manufacture its own sausages, initially sold only at the 35 London Road branch but later available from other branches too.[7]

35 London Road also saw one of the few female Sainsbury’s managers to retain their seniority after the staffing changes enforced by the First World War. Rebecca Juniper was promoted to lead the Coulsdon branch during the war, but demoted again when the previous manager returned from his military service. However, in February 1922 she became manager of the branch at 35 London Road, and remained so until May 1928.[8]

By the mid-1930s, Sainsbury’s had left 35 London Road (though it remained at numbers 9–11 until November 1969). The next occupant I’ve found evidence of was Flinn & Son Ltd, dyers and cleaners, which was in place by 1937.[9] At some point between here and the early 1950s, the premises was physically divided into two shops — 35A and 35B — with Flinn & Son now trading alongside Albert Smith, ladies’ and gents’ tailor.[10]

By 1956, the lease of 35A London Road was in the hands of Richard Kerr, an optician who had previously worked from a room above Millet’s in the High Street. His new premises gave him a shopfront presence which he sought to expand by also obtaining control of number 35B. However, he was refused permission to reamalgamate the two shops; so when number 37, next door, came up for sale in the mid-1970s, he simply moved there instead — and his son and grandson still practice there today.[11]

Next to move in to number 35 was London Leather, which sold leather and suede clothing. It was in place by early 1979 and remained at the premises until the late 1980s.[12]

I haven’t been able to pin down when 35A and 35B were finally reunited. A Croydon Council planning application from c.1976 (ref 76/1864 BR) for “Internal Alts to shop” is suggestive, but sadly not viewable by the public — I’ve only seen its entry on the index card for the address. This could be Richard Kerr’s refused application, or it could be a later successful application by the owner of the building or by London Leather. It’s possible that the reason for refusal was a reluctance to allow more non-retail use along what was seen as a shopping street[13] — and London Leather, as a retail business, would thus have had no problem amalgamating the two parts of the shop. Similarly, if the owner of the building was happy to advertise the property for retail use only, there could have been little objection on those grounds.

London Leather was followed by a takeaway called Croydon Tandoori run by a Mr Amin, who was originally from West Africa. The Croydon Tandoori opened in the early 1990s but had closed again by mid-1998.[14]

The first decade of the twenty-first century saw a short period of vacancy followed by a couple of years as a “toys and china” shop (the name of which I’ve been unable to discover). By 2004 the premises were occupied by a clothing shop called Nu West.[15]

Shortly after this, the son of the long-term landlord of number 35 inherited the property from his father. As the incumbent tenants were ready to move on, the new owner decided to try running a shop there himself, rather than renting it out. Omar Khan opened his business in 2005, selling various health and beauty products, and by 2007 was doing well enough to expand across the road.[16] He thus had two shops on London Road when I moved to Croydon in 2011 — Beauty Trend at number 35 and Ideal Discounts/Ideal Beauty at numbers 40–42.

Following nearly a decade of trading at 35 London Road, however, in early 2014 Mr Khan decided to consolidate his beauty supplies business at numbers 40–42, and lease number 35 out to another trader.[17] Khan Mobile, London Boyz Toyz, and Nadine Stylist were all in place by 6 March that year.

Thanks to: Omar Khan; Christopher Kerr; BT Heritage & Archives; the Planning Technical Support Team at Croydon Council; all at the Croydon Local Studies Library; and my beta-reader Kat. 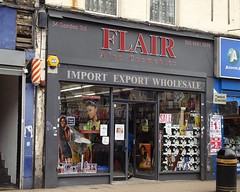 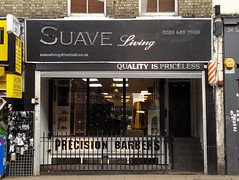 36 London Road: Suave Living and Precision Barbers »
Built in the 1870s and initially used as a draper’s shop, 36 London Road has a history dominated by hairdressing — a function it still serves today.