As noted in my previous article, I’m covering the site of 145–151 London Road in a mini-series of four articles. The first of these covered the initial development of the site and the full history of the southernmost property built there; here I discuss the second property going northwards, and in future articles I’ll cover the third property and the fourth property plus the present-day occupants of the entire site.

Numbers 145, 147, and 149 London Road on the 1868 Town Plans. Number 151 has not yet been built. Montague Road is near the bottom of the image, and a small sliver of London Road is on the far right. I have rotated this somewhat; in reality, Montague Road runs roughly southwest to northeast. (In addition, at the time this map was made these houses were numbered 46, 47, and 48.) Base map image courtesy of the Museum of Croydon.

The Jacksons were replaced first by Louisa Pearce and then by Elizabeth Johnson. Little information survives about either woman, but the 1861 census records Elizabeth as a widowed “Fund Holder”; that is, someone with an independent income. Louisa was likely in the same situation.[2]

The 1860 indenture between Henry Overton and Elizabeth Johnson in which he leases her the house on London Road, held in the Marshall Liddle and Downey collection at the Museum of Croydon (index page 19, indenture dated 10 September 1860). Photo: author’s own.

By late 1862, Elizabeth had been replaced by estate agent Henry Hamilton, who lived here with his wife and — eventually — at least five children. He had a business address on Coleman Street in the City of London, but also advertised his London Road address, possibly indicating that he conducted some of his business from home.[4]

Advertisement for Henry Hamilton’s estate agency on page 7 of the 22 December 1864 London City Press. Note that 47 London Road was renumbered to 89 in 1890 and again to 147 in 1928. Image © The British Library Board. All Rights Reserved. Reproduced with kind permission of The British Newspaper Archive; view the original here (requires subscription).

Henry and his family left London Road in the mid-1870s, and were replaced first by a Mrs Lovell and then by Scottish-born textile artist John Campbell. John arrived on London Road around 1879, and remained until around the late 1890s.[5]

Rather unusually for the area, the house then remained without a tenant for around a decade and a half.[6] However, by 1915 it had been brought back into occupation with the arrival of the dental partnership of Culver & Sawday.

John and Mary Ann Culver with five of their children. The number and apparent ages of the children in conjunction with census data suggest a date of around 1880, and additionally that Henry Culver is the child sitting next to his mother at the left. Photo supplied by John Culver’s great-grandson, Doug Culver.

Born in Margate around 1839, John Culver was a member of the Plymouth Brethren, a Christian organisation which broke away from the Anglican church just a few years before John himself was born.[7] He first arrived in Croydon in the 1870s, and by 1878 was in partnership with a homoeopathic chemist, William Gilbert, at 31 London Road. The two men parted company in 1881, but John retained 31 London Road as both his business premises and his family home until around 1890. He then moved to North End, via a very brief stay on Tamworth Road.[8]

By 1891, John’s son Henry was studying dentistry himself, and over the next decade became a specialist in mechanical dentistry; that is, in the production of dental prostheses such as crowns and dentures. Working alongside his father, Henry would have been well-placed to complement the latter’s work as a surgeon-dentist.[9] In 1899 he married Maud Nock, a decade his junior and the Ipswich-born daughter of a carpenter, though the couple continued to live with Henry’s parents and siblings on North End rather than finding a home of their own.[10]

John Culver moved his household – including Henry and Maud – back to London Road shortly after Henry’s marriage, taking the end-of-terrace house at number 671, a little to the south of Thornton Heath pond.[11] Henry had been diagnosed with heart disease, however, and left Maud a widow after only a couple of years of marriage. He was buried on 2 May 1901 at Queen’s Road Cemetery.[12]

John had lost not only a son, but also a partner — and at this point he was in his 60s, and may well have been relying on Henry to continue the practice after him. Undaunted, he took on a new partner around a year after Henry’s death: Harry Burt Sawday, who seems to have gone by his middle name of Burt. Burt was in his early 20s, the son of a Baptist minister and only very recently qualified as a dentist. The partnership of Culver & Sawday continued to operate on North End until around 1914, when it returned to London Road and took up occupation of number 147.[13]

The remaining Culvers continued to live at number 671 until John’s death on 20 September 1921, at the age of 83.[14] Burt continued to practice at 147 London Road for two and a half decades after his partner died, apparently right up to his own death at the Carshalton War Memorial Hospital on 1 December 1946.[15]

It’s unclear what happened to the property in the years immediately following Burt’s death. By 1955, however, 147 London Road was in use by tie manufacturers Melliard Bros, which had previously been located on Streatham High Road.[16] By 1962, Melliard Bros had been joined by shirt manufacturers Derek Farndell.[17]

It’s not clear whether these companies between them occupied the entire building. The original planning application for shirt manufacture requested only “The use of six rooms on the second and third floors [...] for the manufacture of shirts, using four sewing machines”, but it’s entirely possible that Melliard Bros used the whole of the ground and first floors for its tie manufacture.[18] In any case, both companies would have been forced to vacate the building by the end of the 1960s, for the reason described below.

As noted in my previous article, the late 1960s saw the clearance and redevelopment of the entire site between Montague and Chatfield Road. Number 147, along with its neighbours, was demolished after well over a century of life, and replaced by the building that still stands there today. More details of this, along with a description of the current occupants, will be provided in a future article. 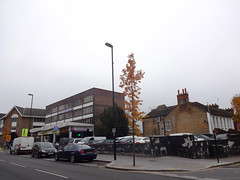 « 145–151 London Road: Praise House (part 1)
The stretch of London Road now numbered as 145–151 lies on the west side, between Montague Road and Chatfield Road. I’ll be covering this in a mini-series of four articles, focusing on the four houses that used to occupy the site. In this first article, I also discuss the initial development of the land. 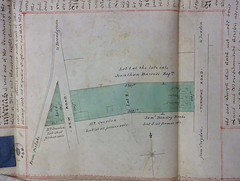 145–151 London Road: Praise House (part 3) »
The now-demolished 149 London Road was built by Croydon brewer Henry Overton in the 1840s. Following a succession of different tenants including another Croydon brewer, Bristow Collyer of Nalder & Collyer, it became home to Henry’s daughter — and inheritor of the house — Rosa Paget. Her son Clarence later became one of Croydon’s most respected local historians.