154 London Road is currently occupied by Croydon Funeralcare, a funeral home run by the Co-op with a tenure of over 70 years.

Until the early years of the 20th century, the properties now numbered 152–162 comprised three private houses — one detached, and a semi-detached pair. It was the detached house which corresponded to today’s 152–154 London Road, and I’ve already told the story of its time as a private residence in my article on number 152. Here I describe the history of number 154 after all three houses were converted to shops around 1906.[1] 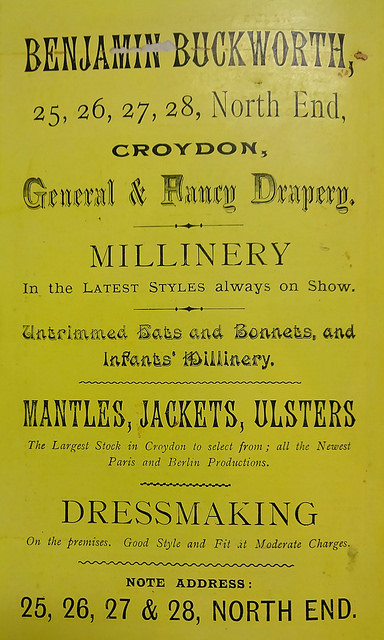 Advertisement for Clara’s employer, Benjamin Buckworth, on the back papers of Ward’s 1893 directory. Reproduced courtesy of the Museum of Croydon.

The first occupant of the new shop was John Hood Mulliner, a 30-something draper and milliner who also lived on the premises along with his wife Clara and their young son Archibald. Even though number 154 was itself a subdivision of the old detached house, the Mulliners were not the only people living here; the 1911 census records a dressmaker, 31-year-old Eleanor Merritt, as a separate householder at the same address.[2]

John and Clara may have met each other through their work in the drapery trade. Although born in Bournemouth, by the time she was 21 Clara was working as a draper’s assistant at Benjamin Buckworth’s drapery, millinery, and dressmaking establishment on North End in Croydon. She and John married around five years later, in 1896, but spent some time living in Tulse Hill before moving to London Road.[3]

Around 1914, John’s drapers shop was replaced by The Curio Shop, run by one F C Remmett. Although this remained for over half a decade, no further information about it survives. It was most likely some sort of antiques shop.[4]

F C Remmett departed by 1923, and was replaced in quick succession first by J W Shepherd, who dealt in “Gramophones &c”, and then by a bootmaker named J Hoare. Neither remained long, and both were gone by 1925.[5] 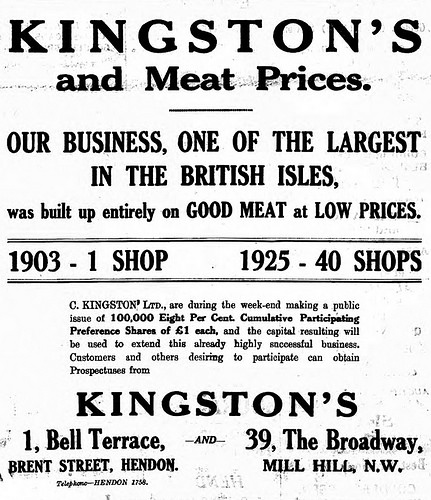 Advertisement for C Kingston Ltd share issue on the front page of the 1 May 1925 Hendon & Finchley Times. Image created courtesy of the British Library Board and reproduced with kind permission of the British Newspaper Archive; successor rightsholder unknown.

Next to arrive was a branch of C Kingston Ltd, a chain of butchers. Founded by Charles Kingston in 1903 as a single shop, by the time it became a limited company in 1925 the chain had grown to around 40 branches in and around London. Although swiftly swallowed up by the Union Cold Storage Company (a subsidiary of what later became the Vestey Group), the shops continued to operate under the C Kingston name, like other previously-independent retail butchers in the group such as J H Dewhurst and R C Hammett.[6]

The London Road branch opened in 1924, along with eleven other branches of this rapidly-expanding chain. It remained here until the early 1930s.[7]

By 1934, C Kingston Ltd had been replaced by Arthur E Cook Ltd, a firm of electrical contractors established around 1920 on Greenside Road (a side road running west off London Road just a little further north). The firm remained on London Road until the end of the decade before moving first to Station Road and later to St Michael’s Road.[8]

Advertisement for Arthur E Cook Ltd at 6 St Michael’s Road. Found as a clipping in the firms files at the Museum of Croydon; the source is not given, but “1954” has been written at the edge.

Arthur E Cook’s replacement would turn out to be an enduring one. The South Suburban Co-operative Society (SSCS), which had its main headquarters just down the road at number 99–101, resolved in the early 1940s to begin offering funeral services for its members.

In doing this, it was following the example of other co-operative societies, such as the Royal Arsenal Co-operative Society (RACS), which had introduced funeral furnishing in 1929. Indeed, according to Gillian Lonergan at the National Co-operative Archive, “co-operative societies were involved in funerals at the end of the nineteenth century, though funerals at that time were normally carried out by the family and the major need was for a coffin and a means of transporting it to the cemetery. Societies’ works departments often organised the making of a coffin and loan of a wagon.”[9]

The SSCS was thus relatively late in beginning to provide funeral services. It isn’t clear what prompted it to finally get around to this, though requests from members may have been part of the reason; one example comes from a series of “Food Conferences” held by the SCCS in October and November 1941, attended by both officers and members of the Society. A brief report on these conferences notes that “It was evident that on the whole the members were fairly satisfied with the service given by the Society, and felt they had no real cause for complaint after two years of war” but that “Requests were made for greengrocery, fishmongery, laundry and funeral furnishing services”.[10]

Excerpt from a December 1941 report on a series of “Food Conferences” held by the SCCS in October and November 1941, reproduced courtesy of the Museum of Croydon.[11]

The SSCS Committee considered two main options for funeral provision, both in conjunction with other societies: the Co-operative Wholesale Society (CWS) and the RACS.

The CWS Funeral & Monumental Department had been set up just a handful of years earlier, in 1937, both to support societies that were carrying out funerals themselves and to provide a full service where societies did not offer funeral provision. On 4 October 1941, two officers of the CWS “placed before the Committee full particulars of their Funeral Service with other Societies, and stated they would be prepared to enter into the same arrangement with this Society. The CWS would provide all Buildings, Plant and Staff to operate the scheme in its entirety and allow a Discount of 15% in the total Service Charges to Members (no discount being allowed for fees &c).”[12]

Excerpt from minutes of the 1170th meeting of the SSCS committee, held on 4 October 1941, describing the arrangement offered by the CWS Funeral Services. Reproduced courtesy of the Museum of Croydon. 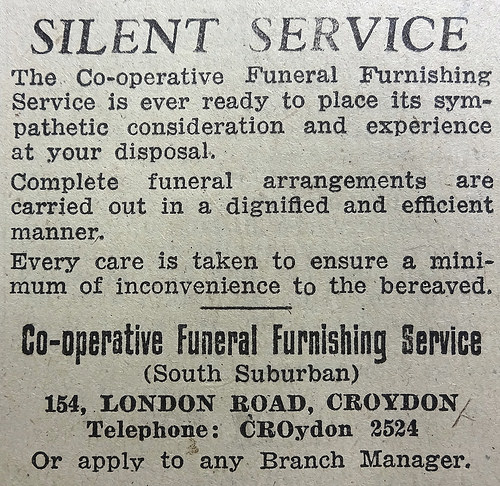 By early 1942, the SSCS also had an offer from the RACS to provide “full service to our members in the vicinity of their depots and allow a commission of 10% on the business”. However, “With regard to the major question of development of the business after the War, and erecting necessary buildings, and providing all equipment and staff &c, they could give no definite understanding.” and so “After full consideration it was resolved to renew the discussions with the CWS.”[13]

On 23 April 1942, the Committee resolved “that the agreement with the CWS now be signed”, and the new “Co-operative Funeral Furnishing Service (South Suburban)” was open at 154 London Road by late 1944.[14]

The link between the SSCS and the CWS became even stronger in the 1980s, as the two Societies agreed to merge with effect from July 1984; the RACS joined the merger less than a year later. Another merger, in 2000, between the CWS and the Co-operative Retail Services (CRS), led to the creation of the modern Co-operative Group.[15]

Today, Croydon Funeralcare is essentially a one-person operation, run by manager Jan Hicks. The public space consists of two small chapels of rest on the current ground floor, and an arranging room up a half-flight of steps on what would have been the ground floor of the original private house. Jan’s office space is further back, behind the arranging room, while the upper floors are used for residential purposes and accessed via a separate entrance to the side of the street frontage.

The chapels of rest, which give the bereaved space and time to sit quietly with the coffin, have been given locally-relevant names in line with the Co-op’s usual practice. Here, they’re named “Whitgift” and “Whetheral”. The first of these is obviously after John Whitgift, the Archbishop of Canterbury who gave his name to many other places and organisations in Croydon, but it’s not at all clear what “Whetheral” refers to. Any information on this would be most gratefully received![16]

Thanks to: Gillian Lonergan at the National Co-operative Archive; Jan Hicks at Croydon Funeralcare; everyone with whom I discussed the question of the name “Whetheral”; the Planning Technical Support Team at Croydon Council; the staff, volunteers, and patrons at the Museum of Croydon; and my beta-reader bob. Census data and London phone books consulted via Ancestry.co.uk. 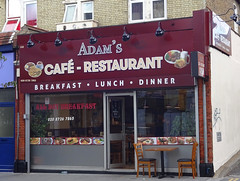 « 152 London Road: Adam’s Cafe
Built on part of the old Oakfield Estate, 152 London Road started life as a private house before being converted into a shop around the turn of the century. It spent three decades as Ropers Stores, a family-run hardware business. Today, it’s a traditional British cafe serving fried breakfasts, sandwiches, and mugs of strong tea throughout the day. 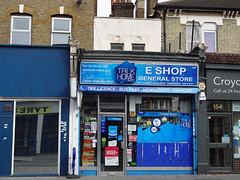 156 London Road: E Shop General Store »
Sandwiched in the middle of a short terrace, 156 London Road was built around the turn of the century to fill a gap between two other buildings. One of these buildings, Arundel House, was home to Alfred Roper, honorary secretary of Croydon General Hospital. Number 156 itself has sold confectionery for over a century.