Mazi is a small Turkish restaurant at 81 London Road, soon to celebrate its 15th year in West Croydon.

Late 1890s–early 1900s: Construction of the building, and A Parsons, fruiterer

As noted in my article on number 79, numbers 79–87 were built in the late 1890s as a five-property terrace, replacing an older pair of semi-detached houses. First to arrive at the new number 81 was The Fruit Stores, run by fruiterer A Parsons. This, however, had a very short tenure, arriving around 1900 but gone again by the start of 1902.[1]

Sign for The Fruit Stores at 81 London Road, visible above the much newer sign for Mazi. Photo taken in October 2009, © Paul/lesterp25, used by permission.

The next occupant lasted rather longer. Egleton Bros, hardware merchants, was in place by 1902. This company was the successor to F A Egleton, which for the previous four decades had sold oils, paints, ironmongery, glass, wallpaper, and other such items at 5 London Road before being wound up in late 1901. F A Egleton had been run by Frederick Alfred Egleton, latterly with the help of his sons Walter Fred Egleton and Louis John Egleton.[2] Egleton Bros itself was initially a partnership between Walter and Louis, but this partnership was dissolved in December 1905 and Walter continued the business alone.[3]

Walter may have had some help from his father in doing this, despite the departure of his brother; certainly, Frederick was living at number 81 when he died on 30 October 1909. Walter’s mother Harriett continued to live with her son for at least a couple of years after her husband’s death.[4] Around 1912, Egleton Bros opened another branch at number 67, and around 1920 it departed number 81 for good.[5]

Advertisement for Egleton Bros in Ward’s 1909 Directory of Croydon, reproduced courtesy of the Croydon Local Studies and Archives Service. Note that number 57 was renumbered to 81 in 1927.

Next to arrive, and in place by 1921, was C H Baber Ltd, a footwear company founded by Croydon resident Charles Henry Baber. It seems to have had some connection to the Canadian Shoe Stores further up London Road at number 335. By 1922 Charles was also trading at 309 Oxford Street in central London, and by the end of 1924 he had closed his London Road shop and opened a new one on Regent Street. Around this time, the company changed its name, trading as both Babers Ltd (on Oxford Street) and Charles H Baber Ltd (on Regent Street).[6]

The company specialised in fitting shoes — including those of the fashionable type — to all shapes and widths of feet. Charles himself published a pamphlet in September 1925 exhorting people to “accord [their feet] the utmost care and consideration”, stating that:[7]

[...] to ensure a perfect fit — without which foot-comfort is an impossibility — I find it necessary to stock at least 18 different lengths, and no less than 130 different widths, and I require no fewer than 324 sizes and fittings from which to select. [...] it is necessary, in addition, to this range of sizes to stock at least 300 different styles, such as laced shoes, strap shoes, evening shoes, in all shapes, colours and qualities and for all occasions, morning, afternoon and evening.

Shoe made for Charles H Baber, c.1928–1932. Note that this is a slightly later date than the company’s time on London Road. Image © Shoe Icons, used by permission.

I went to the shop in Regent Street but felt very sceptical. During more than half a century I had tried in vain to obtain a ready-made shoe that would fit me.

To my amazement they fitted me in a minute with the most comfortable shoes I have ever worn. They enable me to do tramps of thirty miles a day and at the same time they are as comfortable as well-worn slippers. [...] After fitting me with the best shoes I have ever had, a painstaking attendant took me to an X-ray apparatus which clearly showed that the shoes selected were not only comfortable, but were physiologically correct.

Charles was also the inventor of the “Heel-to-Ball” foot fitting method (as opposed to heel-to-toe), which he described in the abovementioned pamphlet as “the only system of foot measurement which can rightfully be described as scientific”. He noted that he was:[9]

[...] most anxious that all who read this booklet should realize that there is a vast difference between foot fitting and shoe selling. Anyone can sell shoes, but few can fit a foot.

A business known as Lee’s China & Glass Warehouse put in a brief appearance after the departure of Charles Baber. This may have been run by Doris Lee, a “comedienne” who lived in the premises around the same time — or, perhaps, it might have been run by one of her relatives, as Doris appears to have been a touring artiste, performing in venues including Montpellier Gardens in Cheltenham and Victoria Pier in Folkestone. In any case, the china shop was in place by 1924, but gone again by early 1925.[10]

Next to arrive was Lewis & Lewis, a firm of tailors and outfitters which moved here from nearby Derby Road by 1926. It expanded into number 79 next door around 1930, and remained in this double property until at least 1939.[11]

The outbreak of war may have brought an end to Lewis & Lewis, and indeed could also have led to a decade-long vacancy at the property. Lewis & Lewis is absent from London phone books post-1939, and a couple of late 1940s photographs in the collection at Croydon Local Studies show numbers 79 and 81 as vacant and in a dilapidated state which suggests they had been vacant for some time.[12] 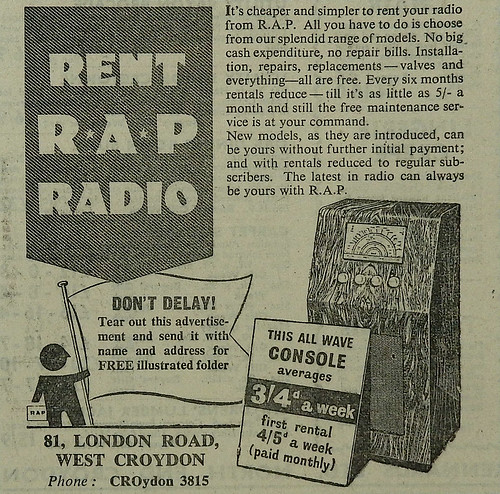 Advertisement for R A P Radio at 81 London Road in the 13 October 1951 Croydon Times, found in the firms files at the Museum of Croydon.

Number 81 was finally brought back into use in the early 1950s with the arrival of radio rental firm R A P Radio, an offshoot of the radio manufacturer R A P Ltd (standing for “Radio Acoustic Products”).[13] This manufacturer was active by late 1934, and originally based at Ferry Works in Thames Ditton.[14] By 1939, it was offering radio rentals from locations including Regent Street, Surbiton, Ealing, and Hornsey.[15]

By 1945, R A P had moved its manufacturing business to Fullers Way in Surbiton; and this is the address from which it made its application to set up at 81 London Road. It was in place on London Road by mid-October 1951, and used the premises as both its head office and its South London sales and servicing department.

Benefits advertised to rental customers included a “splendid range of models” with “[n]o big cash expenditure” and “no repair bills”. Installation, repairs, and replacements — “valves and everything” — were all free. Despite all this, the company only lasted a couple of years in Croydon, until around 1954; and its departure from London Road also seems to have signalled its end entirely.[16]

It’s unclear what the premises were used for immediately after the departure of R A P, but by mid-1959 a new occupant was in place: Gina, hair stylist. This appears to have used both the ground floor and the first floor of the building, and remained until around 1970 or 1971.

By early 1972, the roller sets and permanent waves had been replaced by a sauna and solarium known as Eva. This also offered massage and “slimming” services, and occupied the ground floor and basement. It was renamed to Candy’s around 1977, but closed down for good around 1980.[18]

Marksman Industrial, an offshoot of the Alfred Marks Bureau, made a brief appearance on the first floor around 1979–1980. This, like its parent company, was an employment agency, in this case focusing on industrial jobs. It’s unclear how long it remained here.[19]

Replacing Candy’s on the ground floor was Gill Auto Parts, in place by 1982. This specialised in Mercedes and Peugot parts, as well as “all the continental range”.[20] By April 1984 this had been joined by S R G Skytravel, a travel agency specialising in cheap flights to destinations including West Africa, India, and Pakistan. S R G Skytravel appears to have begun on the first floor, and replaced Gill Auto Parts on the ground floor in the early 1990s.[21]

By the start of 2001, West Croydon already had a small Turkish enclave focused around this part of London Road. Migros, a Turkish and Greek supermarket, had opened at numbers 83–85 around 1997, and the Turkish Food Centre at numbers 73–77 had followed a couple of years later. However, the area lacked a proper Turkish restaurant. Ejder Mazi, a Croydon resident of Turkish origin, found himself having to travel to North London to get good Turkish food, and decided to do something about this. Already with catering experience from having worked in various Thornton Heath kebab shops, he made plans to open his own restaurant at 81 London Road. He bought the lease from S R G Skytravel, and Mazi restaurant opened in 2001.[22]

Mazi specialises in meat cooked over a charcoal grill: lamb shish, liver kebab, chicken wings, lamb chops, and plenty more. Various stews are also available from the hot counter at the front of the restaurant — lamb with butter beans, or chicken meatballs with potatoes, or perhaps lamb with aubergines and potatoes.[23]

Special grill (part of the set meal for four) at Mazi, October 2015. Photo: author’s own.

Administrative note: Normally the next article in this series would be due on 18 December 2015, but as this is just a week before Christmas, I’m postponing it to 8 January 2016. See you in the New Year! 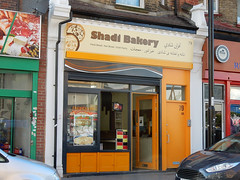 « 79 London Road: Shadi Bakery
Built in the late 1890s, 79 London Road replaced an older semi-detached house that was one of the first on this side of the road. It was later home to butchers, drapers, the “Hungry i” coffee bar, and various Indian and Bangladeshi restaurants. 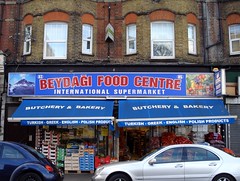 83–85 London Road: Beydağı Food Centre »
Currently a Turkish, Greek, and Polish supermarket, the double property at 83–85 London Road has previously housed a couple of Friendly Societies as well as a furniture shop offering “the secret of happy home comfort”. Built in the late 1890s, it replaced a semi-detached house whose occupants included Henry Lowman Taylor, a wholesale ironmonger who clashed with Charles Dickens over the matter of Smithfield Market.