73–77 London Road is home to a branch of the Turkish Food Centre, a small London-wide chain of supermarkets.

1840s–1890s: Construction of the original building, and use as a private residence

The current building is a modern construction which replaced older premises on the same site.

The first building on this piece of land was a semi-detached house, constructed between 1844 and 1851 on building ground owned by Samuel Bendry Brooks.[1] As of 1851 it was occupied by Thomas and Henrietta Cunningham and their two daughters. According to the 1851 census, Thomas was a gardener; he must have been quite a successful one to afford a house of this size.[2]

By 1852, the Cunninghams had been replaced by George Penfold, a solicitor in his 40s. George was not to remain here long, however, as he died on 3 September of that year after a long and serious illness.[3] George’s widow remained in the house for a while after his death, but by 1855 she in turn had been replaced by Thomas Cox, who remained until around 1859. Thomas was a civil engineer and surveyor who worked for the Croydon Local Board of Health until his resignation in November 1857.[4]

Next to arrive was Matthew Pratt, in place by 1861 but replaced around 1866 by Frederick Richard Frinneby, a bristle merchant who traded at 143 Cannon Street in the City of London.[5] Frederick died in December 1870, at the age of 67, though his wife Abigail and daughter Alice continued to live at the premises until at least April 1871.[6]

By late 1873, Abigail and Alice had given way to a tobacco dealer named John Marston Allsop and his wife Mary Ann. Said tobacco dealer generally went by his middle name of Marston, possibly to distinguish him from his father, John Allsop, who was “Well known as a public man in Croydon, having served on the Local Board and Board of Guardians”. Like his predecessor Frederick, Marston died at home on London Road — though at the early age of only 34, on 13 June 1877.[7]

Thomas Young, solicitor, was in residence by 1880. He was already widowed or soon to be widowed by this point; the 1881 census lists him as a widower with seven children aged between 2 and 14. He appears to have practiced from his home; however, he was gone again by 1884.[8] George Reynolds moved in by 1885, and out again by 1886. A couple of years of vacancy followed, broken by the arrival of another solicitor, David Gunnell, who was in place by 1889 and gone again by 1895.[9]

Until this point, the original building had remained basically unchanged since its construction; a semi-detached house set 8 metres back from the road.[10] However, along with its neighbour (the other half of the semi-detached pair), it was extended forward to the pavement line in the mid-1890s, and the extension was split into two shop premises, then numbered as 53 and 53a.[11]

The original residential part of the building was occupied by Ebenezer Courtenay Wells, who also conducted his accountancy and auctioneering business in number 53. Ebenezer’s wife Mary and son Ernest were also involved in the auctioneering side of this business, which went under the name of Courtenay Wells & Co. Despite declaring bankruptcy in 1902, Ebenezer was to remain on London Road trading as an accountant until the mid-to-late 1910s.[12] Meanwhile, number 53a became Henry Tobutt’s stationery shop, which was to last until around 1899. [13]

Advertisement for Courtenay Wells and Co on the front page of the 29 March 1901 Surrey Mirror. Note that 53 London Road was renumbered to 73 in 1927. Note also that the headline writer has inserted an erroneous comma in the middle of Ebenezer’s surname! Image © The British Library Board. All Rights Reserved. Reproduced with kind permission of The British Newspaper Archive; view the original here (requires subscription).

Henry Tobutt’s successor was a confectioner named T W Eames, in place by 1900. The shops were further subdivided a couple of years later, and by 1904 there were a total of four businesses in the two original shop units: Ebenezer Courtenay Wells, accountant; T W Eames, confectioner; E Hutt’s Book and Music Depot, and the Premium Trading Stamp Co.[14] 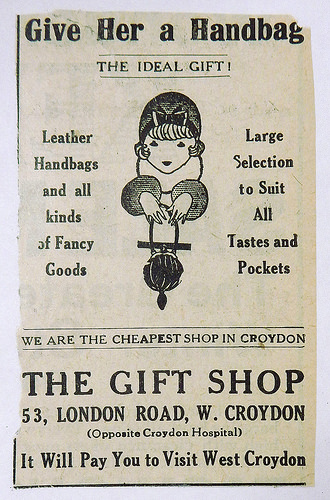 Advertisement for The Gift Shop in the Croydon Times of 7 January 1928, found in the firms files at Croydon Local Studies Library and Archives Service. Note that it still has its old address of 53 London Road; this was renumbered to 73b around this time.

A multiplicity of businesses continued to occupy these shop units over the next few decades, many of them staying for only a year or two.

Little information survives about most of these, with the exception of The Gift Shop, which advertised itself as “the cheapest shop in Croydon” and advertised “Leather Handbags and all kinds of Fancy Goods”. Despite these enticing features, its tenure on London Road was very short; it was in place before the end of 1927, but gone again by the end of 1928.[16]

Advertisement for Fuller’s on page 5 of the 1 October 1921 Croydon Advertiser, via hard copies at the British Library. Note that 53 London Road was renumbered to 73 in 1927.

Advertisement for Gaye in the Croydon Advertiser of 19 August 1949, found in the firms files at Croydon Local Studies Library and Archives Service.

Gaye ladies’ hairdresser was in place by August 1949, and lasted until around 1953 before moving up the road to number 1359, where it remained until the 1970s. Its proprietor was Maureen Sybil Short, who could well have been related to Kenneth Short, proprietor of Shorts Snack Bar & Restaurant.[20] The latter was open by early 1956, and remained until around 1960.[21]

As already noted, however, all traces of these businesses were to be wiped away, as both the original semi-detached house and the 1890s extensions were set for demolition. Planning permission was granted on 17 October 1960 to “Messrs. The Southern Shop Developments Ltd., 12, St. George Street, Hanover Square, London” for “demolition of the existing building and the erection of a supermarket with offices over, at Nos. 73, 75 and 77, London Road, Croydon”.[22]

Construction of the new building was complete by the end of January 1963.[23] However, the other half of the semi-detached pair remained in place, creating the rather incongruous sight of a c.1850 house seemingly growing out of the side of a 1960s office block.

Aerial image from 15 October 2011, looking south, showing the remaining half of the semi-detached house which was demolished in the 1960s (top centre, in brown) and the newer building which replaced the demolished half (to its right, looking somewhat shabby by this point). Image copyright Blom ASA 2011, used by permission. 65–87 London Road, c.1981, with Williams Furniture advertisement on the side wall of number 79. Note how the whole of 73–77 is set back from the road (the ground floor shopfront is obscured by numbers 65–71). Cropped by permission from a photo © Brian Gittings.

1960s–1980s: The United Association for the Protection of Trade

Little evidence survives of the initial occupants of the new building. A planning application for signage for a discount superstore was granted in January 1963, but it’s not clear whether this ever opened — or, if it did, what it sold.[24] Similarly, a planning application for a gym and sauna on the first and second floors was granted in February 1963, but it’s not clear whether this went ahead.[25]

By 1965, however, the upper floors were occupied by the United Association for the Protection of Trade, a company which kept records on individuals’ credit histories and answered enquiries from businesses wishing to discover their customers’ creditworthiness. This remained here until at least the mid-1980s.[26]

Open by October 1981, Wades sold dining tables and chairs, sideboards, armchairs, and sofas. Examples of its products advertised in the Croydon Advertiser of that month included a “LARGE WALL UNIT featuring 5 deep base cupboards, cocktail cabinet, display shelves and illuminated glass display cupboard, attractively finished in mahogany veneer” for £280 (£958 in 2014 prices), and a “Traditional style Chesterfield settee upholstered in heavy Dralon velvet” with “intricately pleated” arm fronts, “quilted roll over back and arms”, and “sprung seats and separate cushions [to] offer an exceptionally high degree of comfort” for £200 (£684 in 2014 prices).[28]

By March 1984, Wades had been replaced by Robills Discount Warehouse, selling household goods, and by March 1985 this in turn had been replaced by a business known as The Factory Shop.[29] The Factory Shop was similarly short-lived; by April 1986, Eurostile Interiors was in place, advertising “high quality furnitures [sic] modern and reproduction”. However, Eurostile in turn closed down some time between March 1988 and March 1990.[30]

A significant period of vacancy then followed,[31] with the next documented occupant being a shop called The Furniture Showhouse. This was in place by May 1996, but gone again by September 1999.[32]

Two decades of instability and vacancy were brought to an end by May 2000, as the Turkish Food Centre (TFC) opened its Croydon branch. Originally established in Dalston in 1980, the company has grown to a total of 14 branches — primarily in North London, but also with one outpost in East London (Leytonstone) and a total of five south of the river.[33]

The Croydon branch sells a wide selection of fruit and vegetables, including fresh herbs, oyster mushrooms, several types of peppers, and tomatoes on the vine. A bakery counter offers Turkish and Iranian breads as well as takeaway lahmacun (“Turkish pizza”), and a butcher’s counter gives the option of meat cut to order. Oils, vinegars, pickles, nuts, and dried fruits are available in abundance.

Thanks to: Brian Gittings; The British Newspaper Archive; Blom ASA; the Planning Technical Support Team at Croydon Council; all at the Croydon Local Studies Library; and my beta-reader Flash. Census data and London phone books consulted via Ancestry.co.uk.

« 72 London Road: Bakhan Restaurant
Built around 1904, number 72 is one of the younger buildings on this stretch of London Road. Its history includes billiard cue manufacturers, chemists, and a stint as the West Croydon Post Office. It’s been used as a restaurant since 1980, and today offers a full menu of Kurdish food. 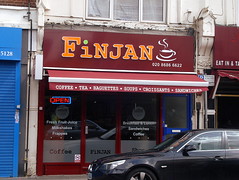