Today, 65–71 London Road is occupied by Savemore: a grocery shop, greengrocers, and butchers specialising in Asian and African ingredients. Number 65 has no internal connection to the rest of the shop, and so I’ve covered it separately in its own article. Here I discuss the rest of the property: numbers 67 and 69–71. Despite the numbering, 69–71 is itself a single unit!

65–71 London Road, December 2011. Number 65 is under the “Savemore World of Frozen Foods” sign, number 67 is under the “Savemore Spicy Foods” sign, and number 69–71 is under the “Graphico” sign.[1] Despite the numbering, and the somewhat confusing choice to put four canopies across three shopfronts, number 69–71 is in fact a single property of the same width as numbers 65 and 67. The brick building rising up in the centre is the original part of numbers 67–71. Photo: author’s own.

The original building, and the present-day one

Numbers 67 and 69–71 currently form a double shop unit with no internal partitions, and although this has not been the case for the whole of their history, it does hark back to how the property started its life in the mid-1800s. Like several of the other shops I’ve discussed so far, the present-day configuration is made up partly of a ground-floor extension from the original mid-1800s building to the current pavement line. Notably, 67–71 London Road is one of the more extreme of these cases, since by my reckoning almost all of the publically-accessible space within the shop is in the extension.

London Road on the 1868 Town Plans. The junction in the lower right-hand corner is with Mead Place and Oakfield Road. I’ve added a red “X” on the building that became numbers 67–71. Its northerly neighbour has since been demolished and replaced by a newer building that now houses the Turkish Food Centre (TFC). Base map image reproduced courtesy of the Croydon Local Studies and Archives Service.

1840s–1850s: Construction of the building, and the first few private residents

The original property was constructed as a semi-detached house between 1844 and 1851.[2] By 1851, it was occupied by Thomas and Sarah Morland, along with their children and servants.[3] By 1855, the Morlands had left and John Poole was in residence, but by the end of the decade John Poole had in turn been replaced by Willoughby Mullins.

Born in Bloomsbury in the early 1820s, Willoughby Mullins married Louisa Ann Huffam in 1853 and was resident on London Road by 1858.[4] His unusual first name may have come from his mother’s maiden name, according to research carried out by one of his descendants. Although this research does not cite its sources, the fact that Willoughby used Louisa Ann’s maiden name as the middle name of one of their sons is also suggestive in this direction.[5]

Before arriving on London Road, Willoughby travelled in Europe, including a trip to Rome in 1851 which resulted in a “nocturnal domiciliary visit” from the Italian police. A report in the “Foreign and Colonial Intelligence” column of the Staffordshire Advertiser of 8 March 1851 speculated that he “was probably an object of suspicion, from the circumstance of his having travelled with a foreigner from Switzerland, who, although unknown to him, appears to have aroused the jealous fears of the police.” Despite waking him up at 2am to see his identification, the police officers “offered no personal molestation to Mr. Mullins, and decamped on obtaining [the relevant paperwork].”[6]

Willoughby worked as an architect, often in partnership with his brother Arthur Rainbow Mullins.[7] Their work included the design of several churches, such as Holy Saviour in West Croydon (pictured above).[8]

He was active in a number of fields during his life, some directly relating to architecture and others more tangential. He was a Master of the Worshipful Company of Pewterers of the City of London,[9] and was also involved with the Croydon Microscopical and Natural History Club. His interest in the Club appears to have been at least partly geological; its 1902–1903 Proceedings and Transactions report that “The late Mr. Willoughby Mullins has presented to the Society a collection of Serpentine and other rocks.”[10] It’s unclear, however, whether this presentation took place before or after his death on 20 April 1902, at 9 Thornhill Road, Croydon.[11]

Although Willoughby Mullins died in Croydon (and lived at 9 Thornhill Road for around half a decade before his death), his association with 67–71 London Road ended in the early 1880s.[12] Next to move in was Dr Thomas Arthur Richardson, who had previously been living above his surgery at number 61. Thomas remained here until around 1890, then moved again to a house (since demolished) on the corner of London Road and Montague Road.[13]

Thomas Richardson’s replacement was another architect — George Ashby Lean. George moved to London Road from Hanwell in 1891 and became a member of the Croydon Microscopical and Natural History Club in 1892, like Willoughby Mullins before him. However, he was gone again by 1895.[14]

A page from the 1892–93 Proceedings of the Croydon Microscopical and Natural History Club, showing George Ashby Lean’s election to membership on 14 September 1892. Note that his address is given as 51 London Road; this was renumbered to 67–71 in 1927, after the property had been split. Photo: author’s own, taken by kind permission of Paul Sowan, librarian of the Croydon Natural History and Scientific Society (the modern name of the abovementioned Club).

The mid-1890s saw the division of the property into two shops: in modern numbering, 67 and 69–71 respectively. The extension forward to the current building line probably took place at the same time.[15] Number 67 was swiftly occupied by Henry James, furniture dealer, and by 1897 number 69–71 was home to Chapman’s Stores.[16]

By 1899, Henry James had been replaced by the Universal Furnishing Co, a business which likely originated in Islington as the Angel Furnishing Stores. Other branches were in Deptford and Whitechapel.[17]

Advertisement for the Universal Furnishing Co on page 3 of the 27 March 1903 Surrey Mirror. Note that 49a London Road was renumbered to 67 in 1927. Image © The British Library Board. All Rights Reserved. Reproduced with kind permission of The British Newspaper Archive; view the original here (requires subscription).

Around the same time, Chapman’s Stores became Hilder’s Stores. This was an independent business run by Joseph Hilder, who lived on the premises with his wife Caroline and their son, also called Joseph. Little evidence remains of the articles sold by this shop, but the 1901 census lists Joseph as a grocer, and a photo held in Croydon Local Studies Library shows an advertisement on the frontage for John Walker & Sons’ “Special Whisky”.[18]

The Universal Furnishing Co remained on London Road until around 1909, but Hilder’s Stores was to prove less long-lasting, and was gone by 1905. Number 69–71 remained unoccupied for most of the rest of the decade, with only a brief interruption by the Surrey Rubber and Waterproof Co around 1907.[19]

c.1909: Another subdivision, and the reason for today’s numbering

Around 1909, the shop previously occupied by Hilder’s Stores was subdivided again, and here at last comes the reason why this single unit has a double modern number. In contemporary numbering, Hilder’s Stores was number 51, and with the split this became numbers 51 and 51a, which were renumbered to 69 and 71, respectively, in 1927. When the two halves were later reunited, the numbering remained.[20]

The subsequent years brought a wide variety of occupants to the three shop units — one full-size, two half-size — that had now been formed from the original mid-1800s semi-detached house. Among the more long-lasting of these was Egleton Bros, decorators’ merchants, almost certainly run by the same family as the older business, F A Egleton, at number 5 just down the road. This occupied the full-size unit, number 67, from around 1913 to around 1959. It also had another branch further up at number 81.[21]

Advertisment for Egleton Bros in Ward’s 1921 Directory of Croydon, reproduced courtesy of the Croydon Local Studies and Archives Service. Note the claimed address of 49 London Road; the actual contemporary number for Egleton Bros was 49a.

Another long-lasting business was Williams & Co, newsagents & tobacconists, present in the half-unit now known as number 71 from around 1910 to at least the late 1950s.[22] The neighbouring half-unit, number 69, was home to Jarrett & Goudge, piano manufacturers, from around 1913 to around 1929.[23]

Advertisement for C S Howes & Co, found in the firms files at Croydon Local Studies Library. No information is available about its source, but a handwritten note on the mounting sheet reads “Nov. 1934”.

By the mid-1950s, number 69 had become home to Abbey Cycles Ltd, which was to remain in place until at the mid-1970s. By 1967, it had been joined by Coastal Cycle Co Ltd, Holiday Radio Ltd, and Auto-Slot (Sales) Ltd. Although contemporary phone books list all four of these businesses at number 69, it's likely that either some of them were in number 71, or numbers 69 and 71 had been reunited into a single premises which the four businesses shared.[25]

Meanwhile, by 1968 Egleton Bros’ old premises at number 67 had been reoccupied, this time by a company known as Servo & Electronic Sales Ltd. By 1974 this had become J M G Electronics.[26]

Electronics and cycles alike were gone by 1977, replaced by Savemore Spicy Foods. Originally opening in the double unit of 67–71, three decades later it expanded to take in number 65 as well.[27] Today, number 65 houses the butchers counter and a few lines of dry goods while number 67–71 carries a small selection of homewares plus the faster-moving groceries including whole and ground spices, rice, beans, and lentils. Neatly-arranged open displays of vegetables stretch the length of the pavement outside, including fresh herbs, Asian vegetables such as tinda and bitter gourd, and multiple types of aubergine.

Thanks to: Khalid at Savemore; Paul Sowan; Sean Creighton, for advice on researching Willoughby Mullins; the Planning Technical Support Team at Croydon Council; all at the Croydon Local Studies Library; and my beta-reader bob. Census data, FreeBMD indexes, and some phone books consulted via Ancestry.co.uk. 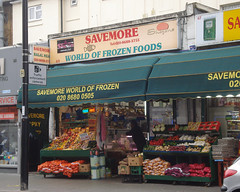 « 65 London Road: Savemore World of Frozen Foods
After being split off from number 63 in the 1930s, 65 London Road became a branch of budget supermarket chain Victor Value, and was later used for selling car spares, fishing tackle, and cosmetics. Today, it offers fresh meat, frozen fish, and African groceries. 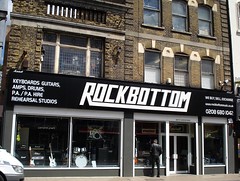 68–70 London Road: Rockbottom »
Music shop Rockbottom is currently celebrating its 40th year on London Road. Originally opened at number 74 in 1975, it moved to numbers 68–70 a decade later, and is still going strong today.