At the time of writing, 61 London Road is in the process of changing from a unisex hair salon to an African grocery shop.

1840s–1870s: Construction of the building, and use as a private residence

The building was constructed some time between 1844 and 1851 as a semi-detached house, with the other half of the pair being its neighbour at number 59.[1] It remained a residential property for the first three decades of its life.

The first occupant was probably Henry Roxby, who by 1851 was a widower in his 60s living on a private pension with his son and one servant.[2] By 1853, however, the Roxbys had been replaced by Edward and Harriet Hennell, a brother and sister in their 50s. Edward was employed as a manufacturer of paper hangings, and like his sister was unmarried. He remained at 61 London Road until his death on 4 November 1864.[3]

Harriet moved out after her brother died,[4] and was replaced by John Fergusson, a “surveyor of taxes”. By 1871, he in turn had been replaced by Caroline Lovell, a widow in her 60s. On the night of the 1871 census, Caroline had quite a full house — her sister Sophia, her son William (a “physician not practising”), and two visitors, Francis and Charles, listed as an art student and a “B. A. of Cambridge” respectively.[5]

A somewhat mysterious interlude in the history of number 61 arrived in the mid-1870s, with the brief appearance of an “Australian Emigration Office”. Listed in Ward’s 1876 street directory with no further details, this may well have been simply a somewhat grand name for a one-person business run from home.

By 1878, the Australian Emigration Office was no more, and new arrival Dr Walter Hugh Montgomery Smith had settled in for what was to be a quarter-century of association with 61 London Road. Initially practising alone, a couple of years later he was joined by Dr Thomas Arthur Richardson in a partnership known as Smith & Richardson. The ordering of their names here was likely due to Walter’s seniority; in his mid-thirties at the time, he was a decade older than Thomas and had eight years’ more experience as a surgeon.[6]

Thomas Arthur Richardson’s entry in the 1885 Medical Directory, courtesy of the Wellcome Library. 26 London Road here corresponds to modern 67–71.[7] Note the mention of the Smith & Richardson partnership — his partner, Walter Hugh Montgomery Smith, didn’t bother including this detail in his own entry!

While Walter’s surgery was here at number 61, for most of his time on London Road he had his private residence a few doors further north, in a large semi-detached house on the land now occupied by numbers 79–81. This was likely because he wanted more space for his household, which at the time of the 1881 census consisted of his wife Margaret, their sons Walter, Harold, and Ernest, and three live-in servants.[8] His business partner Thomas was at this point unmarried and living at the surgery at number 61, but a couple of years later Thomas too moved into more spacious quarters — another semidetached house a couple of doors down from Walter, corresponding to the modern address of 67–71 London Road.[9]

The partnership was dissolved in the mid-1880s, and Thomas switched to practising from his home, while Walter continued at number 61.[10] Thomas moved again around 1890, to a house on the corner of London Road and Montague Road. Around 1903 he left Croydon completely, and moved to Combe Martin in Devon. He retained some ties with Croydon, however; the 1904 Medical Directory lists him as a consulting surgeon at Croydon General Hospital.[11]

Walter also moved his private residence in the late 1890s — perhaps a forcible move, as his house was about to be demolished.[12] He took up residence at the surgery at number 61[13] and remained there until around 1903, when he moved into a house just to the north of the block that had been built on his now-demolished old house. (This house was also later demolished; its site is currently occupied by Lidl.)[14] He remained there until around 1922.[15]

Walter Smith’s early-1900s move marked the end of his association with 61 London Road, as he moved his practice along with his residence. Number 61 remained vacant for a couple of years,[16] and even once reoccupied it saw a period of significant instability.

First to reoccupy the premises were W H Rogers, photographic dealer, and B Messer & Co, ladies' tailors. The fact of there being two businesses where there had previously only been one suggests that part of the period of vacancy might have been employed in building the extension which took the ground floor of the property — previously set back from the road — right up to the modern building line.[17]

Both W H Rogers and B Messer were gone by 1909, and replaced by Duck & Wood, electrical engineers, and W R Nichols, coal and coke merchants. These, too, remained only a short while, and were gone by 1911.[18]

Advertisement for S Sutton in The Croydon Shopping and Entertainment News, No 1, May 1922. Note that 47 London Road was renumbered to 61 in 1927. Reproduced courtesy of the Croydon Local Studies and Archives Service. 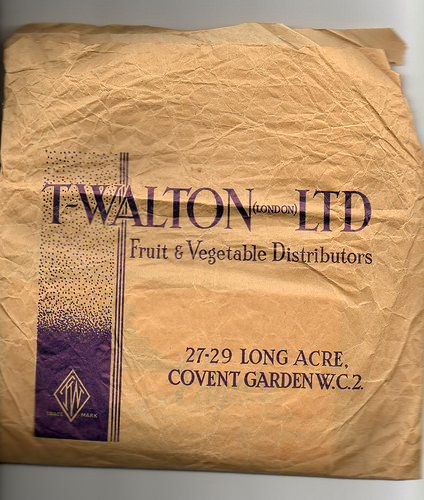 The premises continued to house more than one business at a time during the 1910s. By 1911, Frederick Joseph Richards, estate agent, was sharing space with the National Cash Register Company. The latter was likely an American company, founded in 1884 and expanded to England the next year.[19]

Frederick, who started on London Road as a draper at number 57, lived on the premises with his wife Agnes. By 1913 he was in partnership with someone called Page, but by 1915 Richards & Page had been replaced by H C Reynard, surveyor and estate agent. H C Reynard was also gone by 1917, leaving the National Cash Register Co in sole occupation.[20]

The National Cash Register Co had also departed by 1919, and was replaced by M A Shrubsole’s “dress agency”. It’s not clear exactly what sort of establishment this was, but in any case it was only on London Road for a year or so, and was gone by 1921.[21]

The theme of clothing continued into the 1920s, with S Sutton’s shop offering “Hosiery, Hats and High-class Tailoring”. Much of the stock was focused on leisure wear, including sports coats and tennis shirts. This remained on London Road until the end of the decade.[22]

S Sutton’s hats and coats were followed by T Walton (London) Ltd, fruiterers. Founded by Lambeth-born Thomas Walton, this company was incorporated in the early 1920s.[23] By the time it arrived on London Road around 1930, it already had at least 47 other branches in London and the surrounding area.

T Walton appears to have specialised in railway station fruitery, as 25 of these branches were in stations including both busy central stations such as King's Cross and London Bridge, and further-flung ones such as Tooting Broadway and Willesden Green.[24] The London Road branch would have fit in pretty well with this, being not too far from West Croydon Station. It remained in place until at least 1950.[25]

A menswear shop called Gordons appeared briefly around 1953–1954, but little documentation of this survives other than a few mentions in street directories and phone books.[26] It may have been related to the Gordons that was at 137 Brighton Road, Coulsdon, in the 1960s, but this is only speculation. The Coulsdon one advertised itself as “Men’s wear specialists” and also acted as agent for Hector Powe Tailoring and Moss Bros Hire.[27]

By late 1955, Gordons had given way to Fininley Ltd, manufacturers and retailers of surgical appliances such as spinal supports, surgical footwear, artificial limbs, and lumbar traction units.[28] This remained on London Road until the late 1980s.[29]

Advertisement for Fininley Ltd, 61 London Road. This comes from the firms files at Croydon Local Studies Library; there’s no information about the original source, but it has “1959” handwritten on it.

Following the departure of Fininley, Swinton Insurance took over the premises, moving its West Croydon branch here from its previous location down the road at number 29. This involved a change of use from Class A1 (shops) to Class A2 (financial and professional services), and hence Swinton had to apply to Croydon Council for planning permission.

There seems to have been some controversy here, as the relevant planning application includes a long letter from Swinton to the council explaining why the business belonged in a retail shopping parade:[30]

“It is not an office use whereby the principal activity is people sitting behind desks. The employees at each shop are never any more than 2 or 3, and each is there to sell insurance to the public. [...] [H]ouse insurance will be contained in one pamphlet, car insurance in another. The retail public then help themselves to the particular policies in which they are interested, for either reading at leisure, or signing up there and then. It is therefore immediately apparent that the shop is wholly dependent upon being in a retail street. It requires passing trade. [...]

“The insurance shops themselves fall into the traditional retail category. They are standard size or smaller, and have shop windows and counters. A window display is always maintained. The interior is designed to provide a friendly atmosphere in which the customer can relax. [...]

“The Company was established 27 years ago, and our success is wholly due to what was initially a revolutionary concept of bringing the selling of insurance to the High Street. [...] It is [...] logical that town centres should provide not only goods, not only the finance to buy those goods, but also the facilities with which to insure them”. [underlining in original]

Swinton’s application was successful, and the company traded at 61 London Road from around 1990 to around 2010. It then moved to 1 Norfolk House, Wellesley Road, where it remains today.[31]

In early 2012, Nash Unisex Salon moved from its previous premises across the road at number 74 to a new home at number 61.[32] It continued to trade as a hairdressers until late 2014, at which point the owners decided to take their business in a new direction.

As of early December 2014, the hairdressing stations have been cleared away, and plans are in progress to open by Christmas as an African grocery shop called Kaakyire African Market, specialising in Ghanaian and Nigerian groceries.[33] As a fan of West African food, I’m looking forward to seeing what they have in stock!

Thanks to: Julie at Swinton; Lesley Hall, for advice on researching medical professionals; London Remembers, for putting me in touch with Monika; Monika Roleff; Nash; the Planning Technical Support Team at Croydon Council; all at the Croydon Local Studies Library; and my beta-readers Flash and Henry. Census data and London phone books consulted via Ancestry.co.uk. Medical Directory consulted at the Wellcome Library. 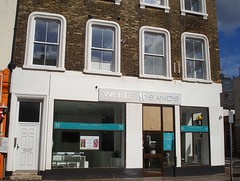 « 60–62 London Road: White Sands
Burned out in the 2011 riots, 60–62 London Road rose from the ashes as a nail spa called White Sands. Its prior century-and-a-half of history was as a pawnbrokers, most notably the firm originally set up by Charles Bowman in the 1870s. 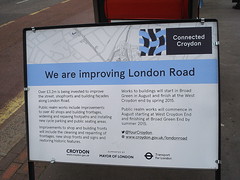 Schedule change for 2015 »
From 2015 onwards, I’m slowing down my article schedule slightly from one every three weeks to one every four weeks. This gives me more time to research each article thoroughly, and I hope will let me keep increasing the quality of my writing.