Diva Hair and Beauty is a hair and beauty retail shop situated at 57 London Road, just north of Mead Place. At the time of writing, the frontage still reads “Julia Knows Beauty” — the name of the previous occupant — but a new shopfront is in preparation as part of the Connected Croydon public realm improvements.[1]

1850s–1860s: Construction of the building, and use as a private residence

Built in the mid-1850s as part of a small terrace with numbers 51–53 and 55, 57 London Road spent the first 15 or so years of its existence as a private residence.[2] The first occupant was Mrs Louisa Grant, a widow in her 60s who originally came from the market town of Waltham Abbey in Essex.[3] Possessor of an independent income, she rented the house from Sarah Wyatt, who owned the full run of seven houses from 31 to 57 (and herself lived at number 37).[4]

Around 1864, Louisa Grant gave way to Reverend Henry Mitchell. The documentary record is a little confused over the next few years, with various sources suggesting that Henry Mitchell was replaced first by a Mrs Campbell and then by Mrs Grant again.[5] However, the 1871 census makes it clear that by that point the premises were occupied by a bankruptcy court clerk named Thomas Willins, along with his wife and children.[6]

Thomas Willins in turn was swiftly replaced by Dr Walter H M Smith, in place by 1872. However, only a few years later, around 1876, Dr Smith moved up the road to a house on the site now occupied by numbers 79–87; he also relocated his surgery to number 61.[7]

Advertisement for A J Sanders in the 29 September 1883 Croydon Guardian, reproduced courtesy of the Croydon Local Studies and Archives Service.

Dr Smith’s immediate replacement was a pair of milliners named L and S A Allen, but by 1878 the property was unoccupied. The period of vacancy was brief, however, as by 1880 it was home to Albert John Sanders, a picture dealer, frame maker, and artist’s colourman who lived and worked on the premises. Born in Bletchingley in Surrey, Albert Sanders was around 40 when he arrived on London Road. His widowed mother Elizabeth lived with him, and continued to do so until he departed London Road around 1901.[8]

Next to arrive at the property was Frederick Joseph Richards. Initially trading as a draper, by 1905 he had changed direction and become an auctioneer and estate agent. Around 1910 he moved up the road to number 61.[9]

Sanders Bros, 57 London Road, probably c.1914–1915. Note the number 43 on the frontage; this address was renumbered to 57 in 1927. Image provided by Colin Young (a descendant of Ernest Albert Young, manager at the store in 1914–1915) via Neil Tyler (whose book Sanders Bros: The Rise and Fall of a British Grocery Giant provides an interesting and well-researched history of the firm).

A significant chapter in the history of number 57 began around 1911 with the opening of a branch of Sanders Bros corn merchants.[10] Although broken up in the 1950s and little-known today, at its peak this company had more retail stores than either Sainsbury’s or Tesco, and when floated on the London Stock Exchange was valued around 30% higher than Marks & Spencer.[11]

The foundation of Sanders Bros was laid in 1887, when Thomas Sanders took over a corn merchant’s shop on Globe Road in Bethnal Green. Thomas was in his mid-20s at the time, and had previously worked in his father’s beer shop around the corner on Green Street (now Roman Road).[12] In 1891 he opened a second branch on James Street, also in Bethnal Green. A couple of years later he was declared bankrupt, but this proved no obstacle to the continuation of the business, which was transferred to two of his brothers, William and Joseph — and the name “Sanders Bros” was born.[13] Further expansion followed, and by 1900 the firm had 22 branches and had diversified from the usual items sold by a corn merchant — flour, rice, pulses, dried fruit, hay for horses, and birdseed — to more general grocery items such as vinegar.[14]

Page from a 1930s Sanders Bros biscuit catalogue, reproduced courtesy of Bristol Museums, Galleries & Archives. This image also appears as Plate 7 of Neil Tyler’s Sanders Bros, where it’s described as showing one of the “large tins used for transporting biscuits to branches”.

The London Road branch was the first one that Sanders Bros opened in Croydon; it was followed by branches on Church Street, the High Street, Addington Road (Selsdon), and Whitehorse Road, as well as others further up London Road at numbers 334 and 1497.[15] Evidence for its closing date is scarce. It certainly lasted until at least 1938, as it continued to be listed in Ward’s street directories up until the final edition in 1939. A photo at Croydon Local Studies Library, labelled “Late 1940’s”, shows the shop with half of the sign broken off, suggesting it had already closed.[16]

Even if the sign breakage actually preceded the closure, it was definitely closed by 1954. In 1950, the firm of Sanders Bros was taken over by an investment syndicate known as Cromwell Industrial Securities Ltd.[17] Cromwell’s intentions for the firm are made clear in ...Signifying Nothing, the memoirs of Julius Silman, one of the members of the syndicate: “[...] the Sanders chain of grocery shops [...] were worth more for their property values than as small trading units.”[18] By 1954, all but two of the branches had been sold off, with the only remaining shops being on Portobello Road and Battersea Park Road.[19]

The closure of Sanders Bros marked the end of 57 London Road’s time as a food retailer.[20] By the mid-1950s, it was in the hands of Shoe Rebuilders, a shoe repair company that already had a branch at 17 Church Street.[21] It’s unclear how long this company remained on London Road, but by 1974 the shop had again changed hands and become a branch of Curtess shoe shop.[22]

By 1982, the premises were home to Super Savers, a shop listed in various sources as selling gifts, household goods, and fancy goods.[24] The name and stock suggest that this was a discount store selling low-quality goods — and the fact that it remained here for over a decade is something of a testament to the social changes that had occurred along London Road since the days of the Reverend Henry Mitchell and Dr Walter Smith.

Super Savers closed around 1995, and the premises fell vacant. There was a period of occupancy by a hair salon called Blades around 1998–1999, but this was not long-lasting.[25]

In 1999, the Nubian Jack Trading Company opened its second branch at 57 London Road. This company, originally based in Streatham, was a family-owned retailer of Black hair and beauty products. By 2002, it was also selling its wares online, billing itself as “specialist e-tailers to people of colour”.[26]

Following the departure of Nubian Jack, the shop was taken over by Julia Knows Beauty, a chain of hair and beauty shops with around 20 branches in places in and outside London including Romford, Upton Park, Walworth, and Manchester.[28]

In May 2012, Julia Knows Beauty became Diva Hair and Beauty[29] (though, as mentioned above, over two years later the Julia Knows Beauty signage remains on the frontage). Today, it specialises in hairpieces and wigs, though it also sells a few nail accessories and some makeup.

Thanks to: Zahoor Ahmed of Diva Hair and Beauty; Brian Gittings; Neil Tyler; Colin Young; the Planning Technical Support Team at Croydon Council; all at the Croydon Local Studies Library; and my beta-readers Alice and bob. Census data and London phone books consulted via Ancestry.co.uk. 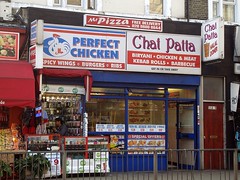 « 55 London Road
Home to Sisley’s confectioners for over 70 years, 55 London Road has also seen service as a private residence, an Indian restaurant, and a succession of chicken shops. 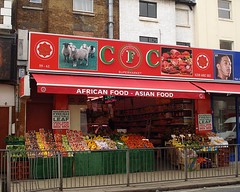 59 London Road: Croydon Food Centre »
Built between 1844 and 1851, 59 London Road is one of the oldest buildings on this part of London Road. Originally home to one of Croydon’s first commuters, it later became a drapers, a fancy goods shop, an oyster bar, a photographic studio, and a wine bar. Today it sells halal meat and African groceries.