Currently vacant, 55 London Road was most recently occupied by a combination of chicken shop, casual Indian cafe, and pizza delivery known variously as Perfect Chicken, Chat Patta, and Mr Pizza. At the time of writing, a sign in the window reading “Waitress Needed” suggests a new business coming soon.

1850s–1870s: Construction of the building, and use as a private residence

Very little information is available on any of these people, though Samuel Picken is perhaps the best-documented. He was a surgeon working in a partnership known as Bottomley & Picken.[3] At the time of the 1861 census he was 29 years old and unmarried, and he employed one live-in servant; his 28-year-old sister Elizabeth may have lived with him too.[4]

Of the seven properties (31–57) built on either side of Mead Place in the mid-1850s, number 55 was the one that remained residential for the longest period. All except this one were in commercial use by the start of 1874, either as retail shops or as service providers.[5] This two-decade streak ended by 1876 with the arrival of James Compton, bootmaker, but by 1878 James had left and the property fell vacant.[6]

Next to arrive was a confectionery shop run by Yorkshire-born John S Chambers. This was in place by 1880 and gone again by 1882, but despite its short tenure it was to set the tone for the next eight decades.[7] 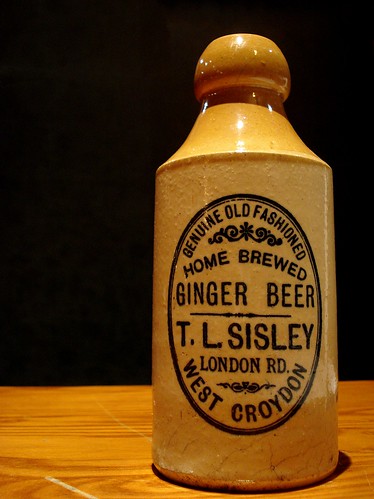 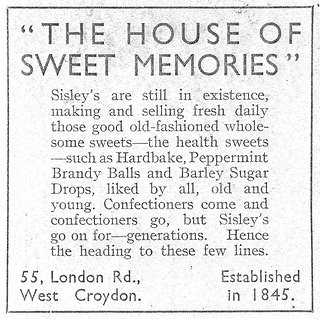 Advertisement for Sisley’s in the Croydon Advertiser of 10 June 1933, reproduced courtesy of the Croydon Local Studies and Archives Service. Note the claim that the business was established in 1845 — I haven’t yet discovered where it was before it arrived on London Road.

Charles A Sisley arrived on London Road around 1883, and brought number 55 back into business as a confectioners.[8] By 1886 the shop had passed to Thomas Lawrence Sisley,[9] and by 1911 it had passed to Thomas’s son, also named Thomas.[10] It continued to trade under the name of Sisley’s until the early 1960s.

Mick Cantwell, who was born on Sutherland Road in 1947 and lived in Croydon until the 1970s, remembers Sisley’s as “A large double fronted shop, inside there was a ‘U’ shaped counter arrangement, with shelves behind and on the top shelf there were large coloured glass, bottles or similar, like you use to get in chemists.”[11]

The Croydon Oral History Society publication Talking of Croydon: Shops and Shopping 1920–1992 includes memories from another Croydon resident, Gwen: “I remember Sicily's [sic] which was a family sweet shop opposite Croydon General Hospital. And one of its great things was all the sweets were made on the premises. I loved their brandy balls. I'm sure there was no brandy in them but they were roughly pepperminty sweets – very nice. They made beautiful toffees and it smelt marvellous when you went by – pear drops which smelt terrible and acid drops, bullseyes, black and white striped, and peppermints. None, or very few, were wrapped in paper but it didn't seem to do us any harm.”[12]

Sisley’s closed its doors for the last time in the early 1960s, and by 1964 it had been replaced by Deedar India [sic] Restaurant.[13] This had an unusual frontage, with a row of several tall, narrow, recessed oval windows. The owner, Mr Uddin, had some trouble getting Croydon Council to agree to his “unconventional shopfront”, with an officer from the planning department noting that they were “not at all happy with the shopfront treatment” and that “no doubt we will be negotiating alterations to the proposed shopfront”. One aspect that was flatly refused was a proposal to install a large protruding rectangular block above the doorway, which was considered “seriously detrimental to the visual amenities of the general street scene by reason of its size and siting”.[14]

John Byford, who was in his teens when Deedar opened, recalls:[15]

The Deedar was one of the favourite Indian restaurants of boys from the John Ruskin Grammar School after drinking in public houses in Croydon. (It was the first Indian restaurant I'd been to — though curries were not unfamiliar to me as my father had learnt to make curries while serving in the Royal Navy drafts in India and Sri Lanka before and during World War 2.) The service was excellent, the food above average for Indian restaurants in the mid 1960s and mostly I remember vegetables such as okra and aubergines which were a novelty at the time. 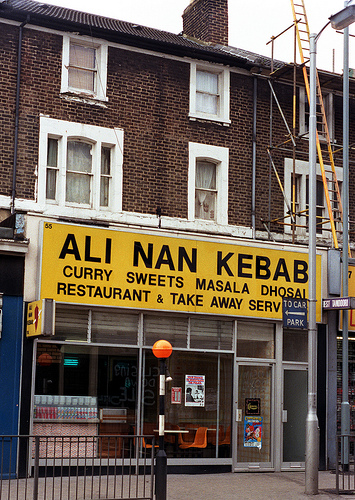 Deedar remained on London Road until the early 1980s, but by 1983 it had given way to Ali Nan Kebab,[16] an altogether more utilitarian-looking establishment with a fully glazed frontage. This offered curries including mutton, “chicken off the bone”, daal, and okra, as well as masala dosas and sweets including gulab jamun, laddu, and barfi. It was open until 2am (4am on Fridays and Saturdays), and offered both takeaway and eating in at small tables surrounded by orange plastic chairs.[17] It lasted only a few years, however, and was gone by mid-1989.[18]

Perfect Chicken was in place by May 2004, and by July 2008 the frontage included signage for Mr Pizza and Chat Patta.[20] It closed down some time between May and July 2014, just a couple of months after Jan Kattein Architects produced a new frontage design to be implemented as part of the Connected Croydon High Street improvements (PDF). 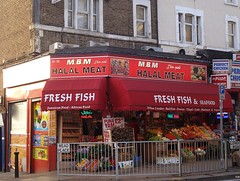 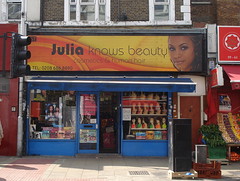 57 London Road: Diva Hair and Beauty »
Originally a private residence, 57 London Road later became a branch of Sanders Bros, a corn merchants and grocers that at its peak was larger than Sainsbury’s and Tesco. In subsequent years it spent time as a discount store, a hair salon, and a hair and beauty shop.