224 London Road is home to Gucio Express, a Polish grocery shop operating under the Food Plus franchise.

Like its neighbours on both sides, number 224 was built shortly after the start of the 20th century as part of Royal Parade, a row of 26 shops with flats above. By the end of 1902, construction was complete and around two-thirds of the new commercial properties were occupied. However, despite some evidence of short-term use by auctioneers Stuart Baker & Co around 1904, 224 London Road had to wait until 1906 for its first long-term occupant. The wait seems to have been worth it, as said occupant was to remain here for the next three decades.[1]

The Croydon Sanitary Steam Laundry was an appropriate occupant for this relatively new development, as it had itself been set up just a couple of years before Royal Parade was completed, in similarly newly built premises on Strathmore Road. Its proprietor, Charles Burleigh, had a laundry receiving depot at 204 London Road by early 1902, and by the end of 1906 this had moved up the road to number 224 — then known as 6 Royal Parade.[2]

Advertisement for the Croydon Sanitary Steam Laundry, including a drawing of its Strathmore Road premises, taken from Ward’s 1903 directory.

Advertisement placed by the Croydon Sanitary Steam Laundry on page 3 of the 6 April 1912 Croydon Guardian assuring customers that it has enough coal in stock to outlast the national miners’ strike of 1912. Image © The British Library Board. All Rights Reserved. Reproduced with kind permission of The British Newspaper Archive.

Charles seems to have been extremely proud of his laundry, claiming in advertisements that it was the “Most Successful Laundry in the South of England”, employing only the “Most Superior Class of Workers” and “doing the work of the principal families in the district”. He also emphasised the individual nature of the management, stating that the business was “personally managed by [...him] and his daughter” and “not a company affair”.[3]

It’s not clear how much of the laundry’s work came in via depots like the one on London Road; some of it, at least, was collected from customers’ homes by handcart.[4] Aside from handcart-pushers, Charles employed ironers, packers, sorters, and “callender girls”. The job of the latter was to operate calendering machines, which used heat and pressure to produce specific effects on the surface of fabrics, such as texturing or increased lustre. Although these effects would originally have been applied by the fabric’s manufacturer, they did not always survive the washing process, which perhaps explains why Charles offered the option of reapplying them.[5] 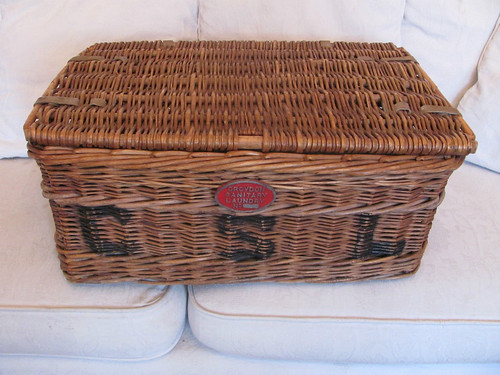 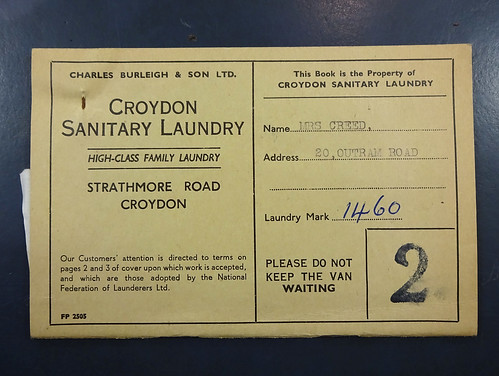 Croydon Sanitary Laundry basket and book. Photo of basket provided by and used with the permission of Mitchantiques. The book is from the firms files at the Museum of Croydon (author’s own photo).

The depot remained at 224 London Road until at least the late 1930s, and the main laundry premises continued to operate on Strathmore Road until the early 1960s (albeit with a slight name change to the Croydon Sanitary Laundry along the way).[6]

The next occupant of 224 London Road was also a long-term one, again remaining for around three decades.

Advertisement for Sport Craft on page 11 of the 20 December 1946 Croydon Advertiser (courtesy of the British Library, shelfmark NEWS1147). 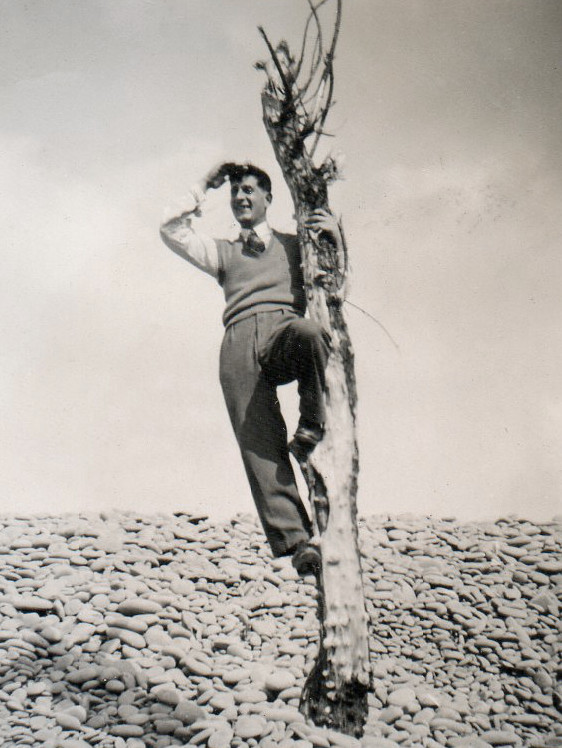 Alan Godfrey, owner of Sport Craft. Image provided by and used with the permission of David Godfrey and N M Godfrey.

Its proprietor, Alan Godfrey, was born in Thornton Heath in 1922. The son of a coal merchant, Alan attended the Stanley Technical School for Boys in South Norwood and had an interest in mechanical matters including amateur electroplating and the construction of model planes from balsa wood.

He started out in business by selling models from his father Lewis’s coal store a little further down the road at number 192, and later returned this favour by taking orders at his shop for his father’s coal.[8]

Sport Craft, 224 London Road, probably late 1940s. Note the advertisement for L F Godfrey’s “Coal Order Office” on the side wall of the entrance. Image provided by and used with the permission of David Godfrey and N M Godfrey.

Mike Etheridge, who visited Sport Craft as a nine-year-old in the 1950s, remembered the experience:[9]

I first visited the shop to buy my first rubber powered aircraft kit, a Fairy Firefly. I was accompanied by my older brother Ron who served an apprenticeship with the Hawker Aircraft company at Kingston, so he was well qualified to help me build the plane [...]

The memory I have of the shop is that it had a narrow frontage but had a fairly extensive interior and may have had an island bench arrangement you could walk around. It was on this bench that I found the Firefly kit. Visiting the shop was magical for me and encouraged me and my friends to pursue the hobby. Eventually the three of us progressed with our models so at the age of 12 we built model planes with diesel engine power that we flew at Epsom Downs.

Sport Craft, 224 London Road, c.1950. Image provided by and used with the permission of David Godfrey and N M Godfrey.[10]

[...] the shop opened every day but Sunday. In the week dad would cycle home and back at lunchtime. On Saturday — traditionally busier — both mum and dad would man the shop, while we were babysat by grand parents. If we went away in the summer, which was quiet, my grandmother would mind the shop during the week and my father would go home by train at the weekend to deal with the Saturdays.

When we were older the whole family spent days at the shop, lurking in the room at the back with the sofa and gas fire. [...] Also in the back was my fathers green desk and files, as well as an old gas cooker used for the inevitable cups of tea. [...] Generally I was sent down to the bakery in the next block to buy iced buns. Somehow this is still my idea of a real treat.

As well as the usual toys it sold a large collection of plastic kits, balsa wood kits and Triang model trains. At one point I believe he had also sold ammunition – this is why there were such good bars on the back window – but this ceased long before I was paying attention.

Whilst generally I was just a “spectator” in the shop occasionally I would serve customers. This meant ringing up the total using the old silver “National” cash register, and giving change. This got much easier after decimalisation, when prices ceased finishing “19/11d” (pronounced 19 shillings and elevenpence), and ended “...99p” instead. [...]

Of course the advent of decimalisation also meant that the arithmetic on the old cash register ceased working usefully. Typically ingeniously Alan attempted to modify it, using Araldite to fill in some of the ratchet positions to reduce them from 12 to 10 steps. Perhaps unsurprisingly this was unsuccessful, and subsequent arithmetic was done by hand.

Sport Craft, 224 London Road, probably 1950s or 1960s. Image provided by and used with the permission of David Godfrey and N M Godfrey.

Changes over the years included not only the consequences of decimalisation, as described above, but also the advent of self-service:[12]

One significant change occurred in the 60’s–70s. Previously, like all other shops, the goods and the customers were kept separate. Shops had a collection of glass fronted cabinets, and one would ask the assistant if you could look at an item. Slowly this turned over to self-service, less costs for staff, more difficulties with shoplifting. Alan slowly retired the cabinets and created yards of white painted shelves to display items.

Alan continued to operate Sport Craft until the mid-1970s, but was forced to close the shop for good after the freeholder insisted on expensive repairs and rewiring that Alan found impossible to afford. Although Croydon Council allowed a certain period of relief on business rates for empty properties, which helped the family finances for a while, Alan was unable to sell the lease before this period ran out. Needing to make ends meet, he started using the premises to run a clothing consignment store:[13]

Basically this was a second hand clothing store where the stock mostly came from people bringing in clothes to sell. They would get a percentage of the money if they sold. This was supplemented by my parents doing a round of jumble sales on Saturdays, and bringing the spoils home to wash. On these we got to keep the complete sale price. It was surprising how well this business worked.

The clothing store lasted for more than a year, but eventually closed in its turn.[14]

The departure of the Godfreys signalled an significant change for 224 London Road. The National Westminster Bank, which had occupied the next-door corner property at number 222 since the early 1920s and bought the freehold of both 222 and 224 in 1965, was now able to expand into the newly-vacant 224. After gaining planning permission from Croydon Council, the bank converted the two properties into one and continued to operate from the double-sized premises until August 1994.

A couple of years of vacancy followed the departure of the bank, during which several planning applications were lodged with Croydon Council and building work took place to convert the premises into a restaurant. The first decade of the 21st century saw 222–224 London Road occupied by a string of short-lived restaurants: Viet Hoa, Tasty House, Savana, and Humming Bird. All were gone by the end of 2009, and by January 2012 the premises had been once more converted, this time to a butchers shop called Lobo Halal Meat.[16] 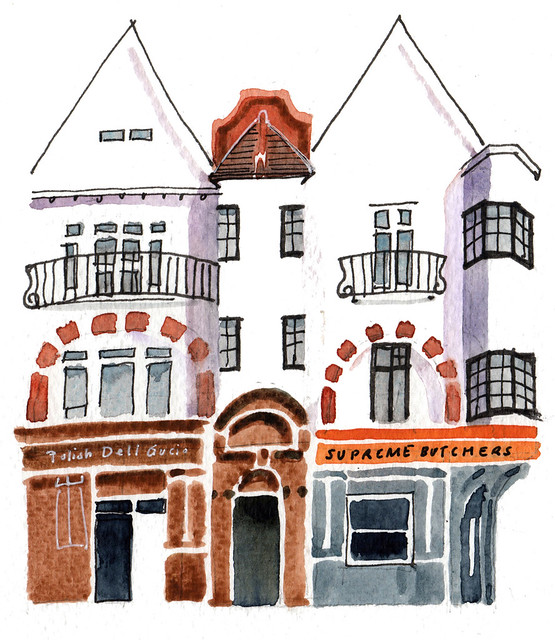 Around the mid-2010s, numbers 222 and 224 were separated into two properties again. Number 222 continued as a halal butcher, albeit under new management and the new name of Supreme Butchers.

Number 224 became a Polish grocery shop. This was open by October 2016 under the name of Polish Deli Gucio, but changed its name shortly afterwards to Gucio Express. By July 2018 it was operating as a franchise of Food Plus, a Polish network with shops in England, Scotland, Wales, Germany, and the Netherlands.[17]

When the spread of Covid-19 to the UK led to a government-imposed lockdown in March 2020, all shops other than those selling essential goods were instructed to close. However, food shops such as Gucio Express were permitted to continue trading. On 26 March, the cover photo on its Facebook page was changed to inform customers of the new precautions required when shopping there: card payments only, disposable gloves for picking up bread and vegetables, keeping a “safe distance” from staff and other customers, and no more than five customers at a time. 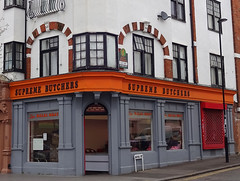 « 222 London Road: Supreme Butchers
222 London Road is currently used for the sale of halal meat, but previously spent nearly the whole of the 20th century as a bank before being converted into a restaurant and finally into a shop. 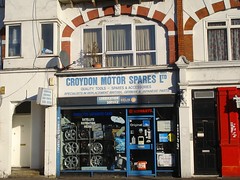